In 1905, Norway became a completely free and independent nation. The union with Sweden was dissolved by the Norwegian Storting's resolution of 7 June. This article deals with what happened in the eventful year of 1905 in the municipality of Flora. The article is written by Wilhelm Kvalheim who in 1905 lived in Florø and was editor of the local paper Nordre Bergenhus Amtstidende. The article is rendered verbatim, but edited with subtitles, and with a couple of additions. 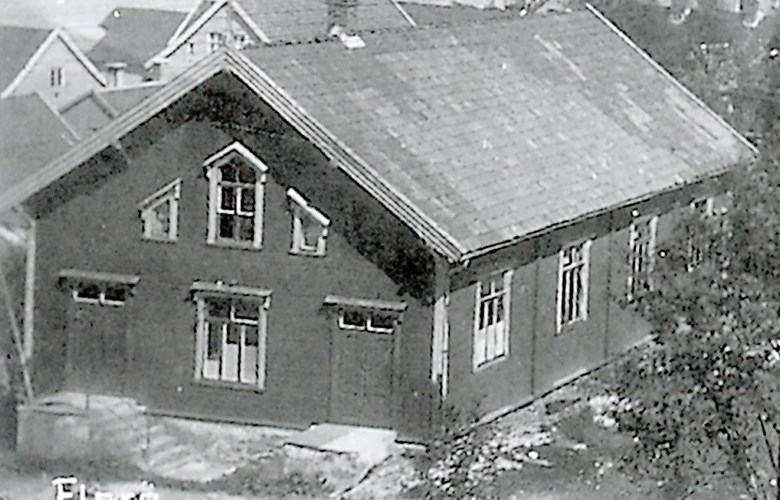 The assembly hall "Fram" in Florø (detail). In 1905, the house was the polling station in both referendums, and a big party for the general public was organized there on 26 November in connection with the arrival of the royal family to Kristiania (Oslo) on 25 November.

A 40-year memory of 1905
"The memory of 1905, of 7 June, the referendums in August and November, the arrival of the royal family - all these things are in my case linked to Florøy where I lived then and worked as an editor.

17 May
It was indeed a strange and memorable year. The 17th of May was blessed with glorious weather and was celebrated in a festive and dignified way, perhaps like never before. The lawyer O. Joh. Vasbotten gave the speech for the day, in which he insisted that Norway and Sweden should be separated and prince Carl of Sweden (sic!, actually Denmark) should be offered the crown of Norway. His prophesies all came true later that year.

7 June and the referendum on 13 August.
Then came the cable on the 7 June resolution that caused a sensation. And afterwards came the referendum. We were three men in a committee to organize the transportation of people from the whole municipality of Kinn to vote at the polling station - at the assembly building called "Fram". The three of us had had some political disagreements in the past, but now we were united in a common cause. The three committee members were O. Joh. Vassbotn, Nikolai Olsen and I. We hired the boat "Balder" to transport voters - only men in those days - into town. First there was a service in the church which was nicely decorated for the occasion. The vicar Evensen spoke about the need to stand together and vote 'yes'. In the shop windows, there were also nice decorations with big 'yes' posters in national colours. Before the voting could start, the Storting representative Lind gave a short speech on the steps outside the "Fram" house. Then everybody went in to cast their votes in the ballot box. As far as I can remember, there was only one 'no' vote in the Kinn parish.
[Editor's note: There was no 'no' vote in the Kinn parish.]

The Karlstad negotiations and the fear of war
Then came the Karlstad negotiations in the autumn. The situation was tense. I particularly remember a Saturday evening with nice weather and moonshine. We knew that the negotiations had reached a critical phase. The two local newspaper editors, M. Vanberg and I, had discussed how to get quickly to the military camp at Nordfjordeid in case of mobilization. That evening the telephone exchanges had been ordered to remain open for urgent messages. People were restless. They walked about in the streets or sat waiting for news at home. I sat waiting in the newspaper office. Then I suddenly heard the sound of many people in the street. Yes, it was the telegraph messenger, old Helljesen, who arrived to deliver a press cable, followed by a large group of men. I opened the cable and read aloud: An agreement had been reached. Everybody was happy and relieved. The fear of war had vanished.

But then people became apprehensive once more. What were the conditions of the agreement? Then the cable on the Karlstad Agreement arrived. This was not received with much joy, to put it mildly. Border fortifications shut down, open border to Sweden! I wrote a pessimistic article in the paper, probably the only pessimistic article I have ever written, always being an optimist by nature. A protest meeting was organized at "Fram" and a resolution was sent that was also co-signed by some conservative men and union friends. The resolution was cabled to the parliamentary members for the county of Nordre Bergenhus. They answered immediately by cable to my newspaper, asking us to notice the positive things that had been won by the Karlstad Agreement. G. Holsen sent a personal cable - and posterity proved him right! - that after a few years, the two peoples would become good friends, because they had peacefully been able to resolve their differences.

Festivities for the king
And then came the royal arrival in Oslo on 25 November. It was on a Saturday. There were festivities all over the country. At Florøy the shop windows once again were decorated. The 'yes' posters were still there with pictures of the king and his family. A cable of acknowledgement was sent to the national authorities, signed by 300 men and women in the city, headed by the city magistrate, the mayor and the vicar. 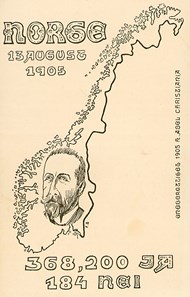 The following day - Sunday - there was a thanksgiving service in the nicely decorated church. The king's motto "Alt for Norge" ("All for Norway") was written in golden letters high above the altar. (I have still got these letters at home). In the evening there was a party for the general public at "Fram", organized by the Christian Youth Association. It was suggested that food and beverages could be served at the party, but the committee fortunately turned this down. Such a huge crowd turned up for the party that people could hardly move from their seats. On the programme were songs, music and many speeches. There was even a speech for Sweden, and it was said that we should send friendly thoughts to our neighbouring country, as their people most likely experienced difficult times right then. We could well afford to remember them. That day was also Queen Maud's birthday, and a speech was also given in her honour.
So, once more we had a Haakon on Norway's throne and a royal prince, Olav.

Free country
17 May 1906, we could celebrate in a free country at Florøy. The weather was excellent and the festivities were rounded off with another party at "Fram".

7 June 1945
Years passed by. The king and his royal family became an integral and natural part of the Norwegian mentality.
However, then came the war with the German occupation and the Quisling government, as well as the freedom fight for Norway at home and abroad. Now King Haakon became the leader and the national symbol, and his motto "All for Norway" became the rallying point for everybody. His return to Norway in 1945 even surpassed what had happened in 1905. And this year, Haakon VII can celebrate his 40th anniversary on the throne with the support, gratitude and respect from the whole country in a way that has no parallel in our history.
W.K."

More about the party for the general public
The festivities in Florø on 26 November 1905 for the new royal family and the fact that the great "liberation effort" had reached a happy conclusion, took place at the assembly hall called "Fram". The paper Søndfjords Avis filed the following report from the party on 1 December:

"Sunday evening the Youth Association organized a party on the occasion that the great liberation effort had finally succeeded, and that we have been relieved of the tension we all had felt this past year. It was an especially fine party to honour the Mother Country and the national authorities, and where people from all political parties attended, and where the songs, the speeches, the music and the declamation played together in a nice harmony. Editor Kvalheim gave a speech for the king, lawyer Vasbotten spoke for the Mother Country, lawyer Hole spoke for the Storting, and teacher E.M. Hole spoke for the government, cantor Dahle for Denmark, vicar Evensen's wife for the queen, shipping agent R. Melvær for the forefathers, and teacher Hole for Sweden. 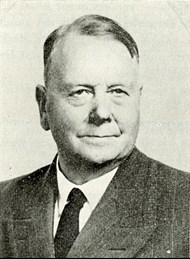 Mrs Haave and cantor Dahle recited a couple of poems. Miss Evensen and Miss Strømsnes played the piano, in addition to a solo song by watchmaker Flesche and choir song. We include the first two speeches in this paper and will come back to the rest of the programme by and by."

Postcard showing the result of the referendum of 13 August 1905.