The steep hairpin bends of "Stalheimskleiva"

"Stalheimskleiva" is the name of the spectacular road in the steep mountainside in the innermost part of the valley of Nærøydalen leading up to the farms of Brekke and Stalheim. The road is extremely steep with a climb of about 250 metres. In 1980 a new road with two tunnels was opened for traffic.

The road down some of the hairpin bends of "Stalheimskleiva" seen towards the northeast.

For centuries this twisting road up "Stalheimskleiva" between the valley of Nærøydalen and Vossestrand was used by the people of Nærøydalen when travelling to Voss and further west. It was also used when they were heading for their summer mountain farms to the west of Stalheim, to places such as Storestølen, Kinnarbakken and Haugane. People from Voss used the road on their way to Sogn or further east. About 1650 the Norwegian postal service was established and the road stretch Lærdal-Gudvangen-Stalheim-Voss became a part of the main road between eastern and western Norway.

Maintenance duties for the farmers

According to a document from the 1830s, this stretch of road up the mountain of Stalheimsberget has from time immemorial been built and maintained by the inhabitants of the valley of Nærøydalen and the adjacent villages of Sogn. In 1779 the area from Stalheim to Oppheim was transferred to the Voss district, and from this year on, the county of "Søndre Bergenhus Amt"(the present county of Hordaland), was given responsibility for the maintenance of this part of the road. The farmers of Nærøydalen and the adjacent villages of Sogn still had maintenance duties for the road stretch from Styvi down by the Nærøyfjord to the boundary of the county of "Søndre Bergenhus Amt", about eight kilometres up in the valley of Nærøydalen.

Need for a better road

The 1830s was a period of economic growth in Norway with increased trade and communication. The road up "Stalheimskleiva" was steep with many bends and was narrow in places, which meant that it was impossible to negotiate with horse and cart.

Plans were made for improvements, and in 1837 captain Olsen from Voss put forward a proposal for improvements and also an estimate of the costs. The estimate amounted to 2499 "spesidalar". This proposal included the road stretch from the boundary to the "Søndre Bergenhus Amt", two kilometres north of "Stalheimskleiva", a total distance of 1920 metres, the road up the "Stalheimskleiva" itself, in all 1044 metres, as well as the stretch from "Stalheimsberget", the top point of the road, and down to the farm of Fyre, 720 metres in all.

The cost estimate for the road construction was later on raised, as the Norwegian Parliament (Stortinget) in 1842 allocated 8000 "dalar" to the project. Henrik Christian Finne, born at Lier in the county of Akershus, was given the job of leading the work. He had received a military officer's education, and in 1840 he got the rank of captain. For a while he worked as a road inspector in the county of Buskerud, and later on he was in charge of a number of national road construction projects. In the 1830s he was responsible for the road construction at Galdene and Vindhella in Lærdal, and about 1840 he led the road building across the mountain pass of Hemsedalsfjellet. He died in Kristiania (Oslo) in 1870.

A wider and better road

The road line was projected and marked by captain Olsen and captain Finne in 1843, and in March 1844 the work was started. At some places the old road was to be widened, at other places the hairpin bends were made less sharp. Some places a completely new road had to be built. Other requirements for the work included a road standard with a width of between 4.2 and 4.8 metres wherever possible, but never narrower than 3.6 metres. Ditches had to be made in wet areas, and they had to be at least 0.45 metres wide and deep. At some exposed places holes had to be made in the stonewalls to let water pass through. Solid railing had to be built at some places, and logs of aspen were dug into the ground in the steepest hills to prevent the sediments from slipping. The road had a maximum gradient of 20%, that is, one metre in five. 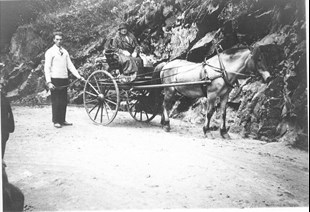 Still a much used road

In the years between 1934 and 1937 the road was improved a little. Solid railings were installed, the bends were widened, but the steepest gradient was still 20%. The road was used the whole year round until 1979, but after that year the road has been open for traffic only in the summer months, from early May until the end of September.