The small town of Undredal

Undredal is a very special small town, located about half-way into the Aurlandsfjord. Until the late 1980s, the town could only be reached by boat. Today the small town is connected by road west to Voss and Bergen as well as east to Lærdal and Oslo. The road leads down all the way to the fjord, where visitors can experience the smallest church in the Nordic countries, a well as the famous local goat cheese. 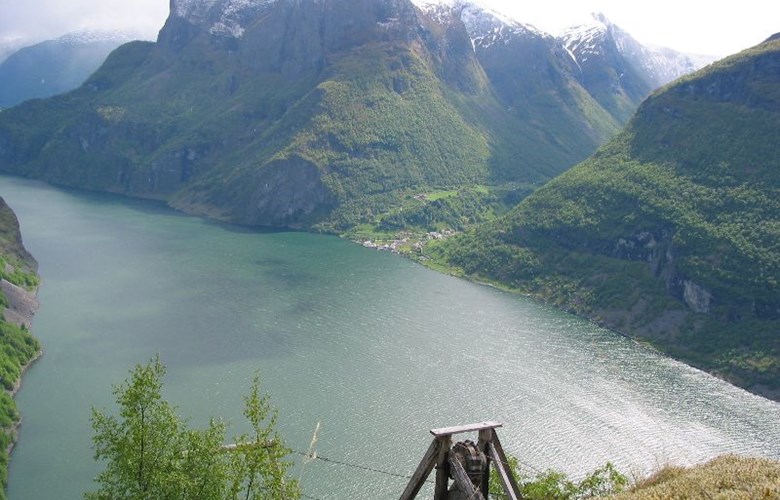 The village centre of Undredal seen from the aerial cable up to Nedberge.

The village and the early history

The village centre Undredal is located at the lower end of the Undredalen valley, at the very heart of the world heritage area. Although separated by the Aurlandsfjord, the farms of Horten, Nedberge, Breisnes and Kappadalen also belong to the village, in addition to Stigen and the deserted farm of Stokko. The village is best known for its tiny stave church, which is not only considered to be the smallest in the Nordic countries, but also one of the oldest in Norway. Apart from the church, we know very little about the early history of the village. The earliest archaeological traces can be found in the mountains south of Undredal. Along the migration routes of the reindeer, there is a whole range of hunting installations in the form of walled pitfalls, guiding fences, in addition to built-up positions for using bow and arrow. However, these facilities cannot easily be 14C dated due to lack of organic material. For this reason, archaeologists are reluctant to link these hunting installations to the first hunters arriving to this country in the Stone Age. In their opinion, these hunting facilities must rather have been taken into use in the Younger Iron Age. On the basis of knowledge from other places in the inner Sogn area, it is likely that the first permanent settlers came to the village in the early 10th century, in spite of the fact that no archaeological traces can corroborate this view.

The legend of the sisters from Undredal

According to an old legend, once upon a time there were two sisters who owned the whole village of Undredal. They decided to do something good for the village. Consequently, one sister built the church, and the other sister built all the irrigation ditches. Whereas one sister remained in Undredal, the other sister settled down further up the valley at Langhuso. Even if this is only a legend, it may contain a grain of truth. At Lunghuso - at present a mountain farm - there are remnants of old foundation walls. One wall has been C14 dated to approximately the year 1200. Traces have also been found of irrigation ditches in the area at places where legend has it that they were made.

We know that people have lived in this village since the mid-12th century. In this period the stave church was built, probably as a so-called "høgendeskyrkje" (literally: church of convenience), a private church for a prominent person. In the oldest records the stave church is referred to as a chapel consecrated to Saint Nicholas, one of the most popular saints in the Catholic Church. From the Viking Age until the Black Death in 1349-50, the Soop family was one of the most powerful clans in Aurland. The sources indicate that this family owned Undredal for some time, and it is then easy to draw the conclusion that they also were behind the building of the church.

The Undredal cottage and the cluster farmyard

A so-called smoke house - "røykstove" - from 1736 is the oldest house preserved from Undredal. The Undredal house as it is called can today be seen at the Sogn Folk Museum - De Heibergske Samlinger at Kaupanger. It was moved there when the landowner Gert Falch Heiberg bought the house for the museum. This was the first house to be moved to the museum and it was originally a bailiff's house from the old cluster farmyard at Undredal, close to the church on the western side of the river. When the farm was divided in 1902, many of the houses were moved from the cluster farmyard, but a few houses remain to this day.

The construction of the smoke house is very similar to that of an "årestove", a building construction from the Middle Ages. The ground level is divided into a hallway, bedroom, and living room with an open fireplace in the middle of the room with an opening - "ljore" - in the ceiling to let out the smoke. In contrast to the "årestove", the "røykstove" has a smoke stove with a chimney and an open fireplace in the corner.

Church records, local history books and lists of emigrants all show that Undredal may well be the village in western Norway with the highest number of emigrants to the United States in the late 19th century and the early 20th century. It has not been clearly established what was the most important driving force behind the emigration rush, whether it was poor local conditions at home or the promised land in America. Generally speaking, it can be said that the substantial increase in population and harsh conditions at home are the main causes of the emigration.

Undredal at the very heart of the world heritage area

Undredal plays a central role in the world heritage area, both in terms of its location on the map and its unique culture and nature. In this village the number of goats exceeds the number of inhabitants. Thus the goats play an important part in forming the special character of the village. The village is famous for its locally produced goat cheese. The cheese has become such a strong brand name that it is practically impossible to produce more than can be sold locally. Every year on the first Sunday after the goats have been moved up to the mountain farm (25 July), the annual Goat Cheese Festival takes place. During the festival, there are concerts and dances, at the same time as local products are marketed in a positive way.