Norum church is a so-called longchurch (basilica type) made of wood and located on the area belonging to the farm Ylmeim in the municipality of Sogndal. The church, with a seating capacity of 230, was consecrated in 1863. The architect Christian Henrik Grosch designed the church. Formerly the church has been called Ylmeim church after the name of the farm where it is located. From about 1840, Norum has been the name of both the church and the "sokn". Norum "sokn" is part of Sogndal parish. 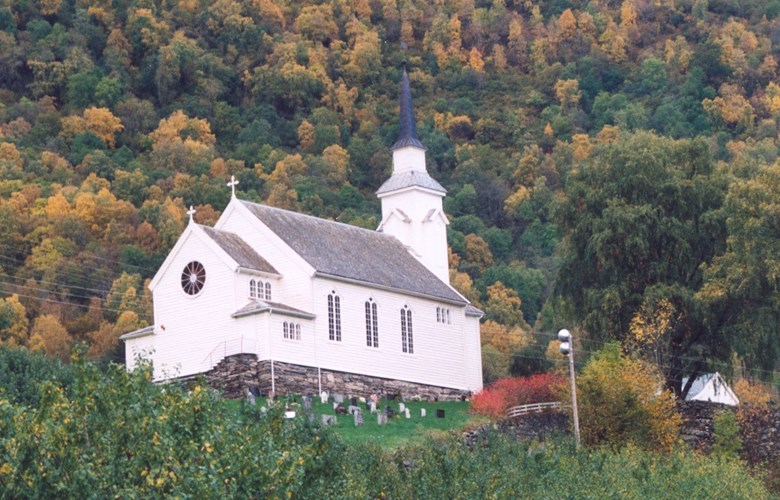 Norum church is located at Ylmeim. The chancel faces the west and the porch to the east. This is the opposite of what is common in most other churches.

New organ and renovation for the centenary.

Norum church is in all respects a light and fine church. The interior walls are washed in lye, the pews are coloured green, and there are grey-speckled columns on either side of the central nave. The gallery front is also painted green with grey-speckled sections and light peach-coloured moulding. The central nave has a raised flat ceiling, and the side aisles have a lowered flat ceiling. The ceiling here and in the chancel is painted grey. Three windows on either side of the chancel provide light through coloured panes with leads. In the nave there are an equal number of windows on both sides, but these are substantially bigger. Along the side walls there are two vestries, one for the vicar and the other for baptismal purposes. The church was renovated for the centenary in 1963. The renovation of the gallery was completed some time afterwards. Earlier this had been painted in a rather dull grey colour, but in connection with the renovation new, brighter colours were added.

A couple of years before the centenary, in 1961, a new organ was installed. The old house organ from 1918 was placed up front in the chancel, and for many years the congregation had wanted to replace it with a new and better organ. The fund-raising was started as early as 1943. On behalf of the organ committee, the vicar Torvanger sent an appeal to the whole congregation to make a serious effort so the church could get a more modern pipe organ. The vicar and the organ committee asked everybody to contribute financially. It took some time, but eventually they managed to raise the sum needed. 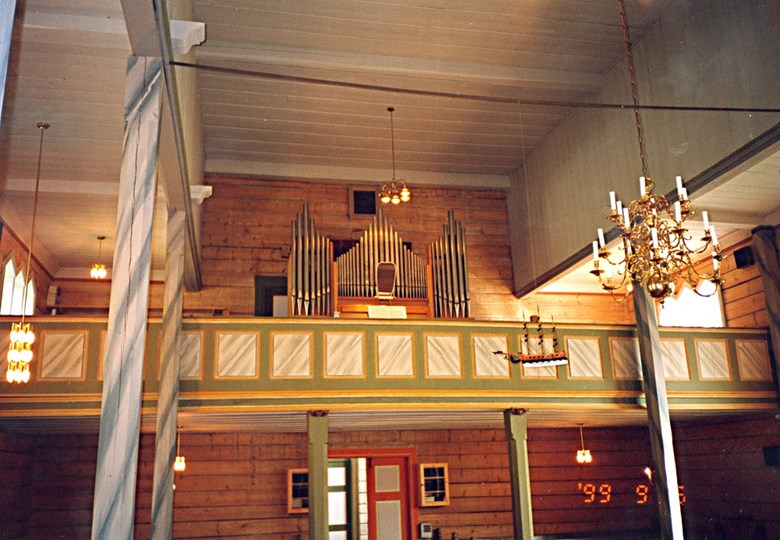 The church stands "the wrong way"

Norum church is one of very few churches that are placed "the wrong way". Normally the chancel faces the east and the porch faces the west, but here it is the opposite. Those who built the church were fully aware of what they were doing. For them "correct" direction was not the most important aspect; it was more important to take into account the land surrounding the property. When they erected the church the wrong way, they did not have to build a new access road up to the church. In this way they saved some valuable cultivated land.

In recent years, some people have suggested that the name of the church should return to Ylmeim which has a long-established tradition. The place where the church stands is called Ylmeim, but in the last few decades Norum has been the name of the church, as well as for the "sokn". The matter has been discussed in the joint church council, but the "sokn" council for Norum has so far not wanted a name change.

The altarpiece from 1703 is made by the carpenter Michel Tarildsen. We do not know the name of the person who made the painting. The main section is a simple representation of Jesus on the cross. Higher up we find the words from John, 4,24 on worshipping God in spirit and in truth, and Matthew, 22,37-40 on the double love commandments. They are painted with golden letters against a black background. Between the parallel twisted columns on either side of the painting of Jesus are Adam and Eve. The wings on the lower and upper sections are decorated with four worshipping angels. 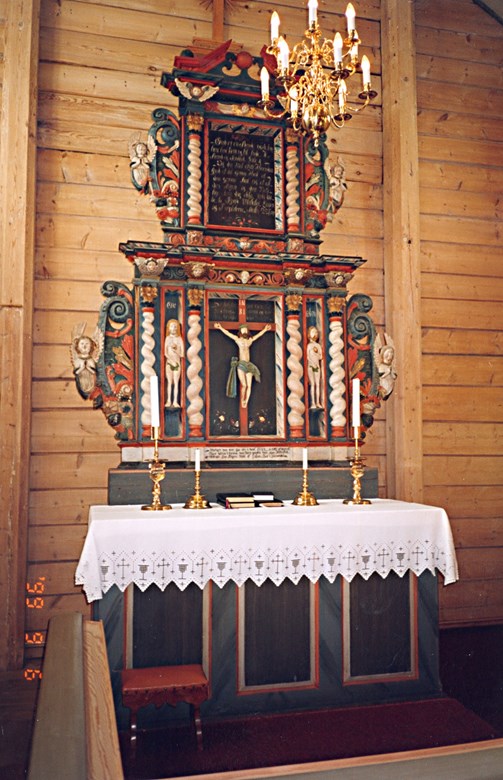 On the altar there are four brass candlesticks in all, two big ones from 1702 with an inscription on the shield plates, and two small undated ones. The altar set consists of a chalice from 1867, a paten, a pyx, and a wine flagon, all in silver. The pulpit dates from 1863, but parts of the pulpit and font date from 1703. The octagonal wooden font dates from 1863 with the inscription "Suffer the little children to come unto me". The baptismal bowl from the 19th century is made of brass. The holy water ewer from 1933 is also made of brass and is a gift from young people from the valley of Øvstedalen.

The oil painting from 1822, painted by Guttorm Bakke, served as an altarpiece for some years. The motif is "the departure of Jesus before the ascension" (Luke 24,50-53). There is also another painting with the motif "Jesus feeding the 5000). The votive ship model is probably made some time before 1850 by Hans Lasseson Melås (born 1786).

The organ from 1961 has nine registers. The church bell from 1678 is a ship's bell above the font with the inscription "Soli Deo Gloria". This bell is used only once a year, when the sermon on Christmas Eve is finished. Then the bell chimes three times three. This has been a tradition since 1887. In addition, there are two other church bells, one from 1888, and the other from 1987. The latter has the inscription "O earth,earth, earth, hear the word of the Lord!" (Jeremiah, 22,29).

The fire in the steeple

On Sunday morning, 15 January, 1989, lightning struck the church steeple. The church has a lightning conductor, but this did not work. People in the neighbourhood saw the fire and notified the fire service which came quickly to the scene. Strong winds made it difficult to put out the fire, but the firemen managed to limit the damage. The leader of the "sokn" council thought it was a piece of good luck that the lightning struck the steeple. As the spire was covered with brass plates, it took some time for the fire to spread. In the meantime the firemen had arrived and started to extinguish the fire. Many people from the village also came to help carry out valuable objects from the church, in case the church would burn down. Fortunately, they did not have to do this.

The memory of the fire is still vivid in the minds of those who experienced it. It was a scary experience, said the leader of the "sokn" council. The first service of the year was meant to be held on that particular Sunday. Instead, people were preoccupied with putting out the fire. Some had the presence of mind to cover the organ with a tarpaulin to prevent it from being damaged. Apart from the water damage, the church suffered relatively little damage. There was substantial damage on the steeple, however, and the cost of repairing it the following autumn amounted to about 1.3 million kroner. The new steeple that was built is an exact copy of the previous one.

At Norum church we find one of the most modern service houses in connection with a church. It contains a small chapel used in connection with prayers before funeral services, and from the chapel there is a sliding door into the chapel of rest. There is also a spacious kitchen, a storage room, as well as shower and toilet facilities for the verger.

The altarpiece from 1703 is made by the carpenter Michel Tarildsen. We do not know the name of the person who made the painting. The main section is a representation of Jesus on the cross. Higher up we find the words from John, 4,24 on worshipping God in spirit and in truth, and Matthew, 22,37-40 on the double love commandments. They are painted with golden letters against a black background. Between the parallel twisted columns on either side of the painting of Jesus are Adam and Eve. The wings on the lower and upper sections are decorated with four worshipping.
Owner: Sogndal kyrkjekontor. - Date: 1999. - Photographer: Ukjend.
Sogndal kyrkjekontor.
1999.
Ukjend.

The octagonal font dates from 1863 and has the following inscription: 'Suffer the little children to come unto me'. The baptismal bowl dates from the 19th century and the holy water ewer from 1933. They are both made of brass.
Owner: Sogndal kyrkjekontor. - Date: 1999. - Photographer: Ukjend.
Sogndal kyrkjekontor.
1999.
Ukjend.

In 1943, people started raising money for a new organ, but it was not in place on the gallery until 1961. In front of the gallery hang the votive ship model and a chandelier.
Owner: Sogndal kyrkjekontor. - Date: 1999. - Photographer: Ukjend.
Sogndal kyrkjekontor.
1999.
Ukjend.
resources:
Aaraas, Margrethe Henden m.fl.: På kyrkjeferd i Sogn og Fjordane - 2. Sogn. Selja Forlag. Førde 2000.