The track up to the mountain farm of Rimstigen

The farms of Bakka and Tufto are located on the western side of the Nærøyfjord about six kilometres north of the village of Gudvangen. In the mountain area to the west of the farms we find the mountain farms of Rimstigen, Breidalen and Røyrdotten. From the farms the track climbs steeply up the mountainside to an altitude of 1300 metres. Then the track descends steadily down to the summer farms of Breidalen and Røyrdotten, 6-700 metres above sea level, in the valley of Jordalen. 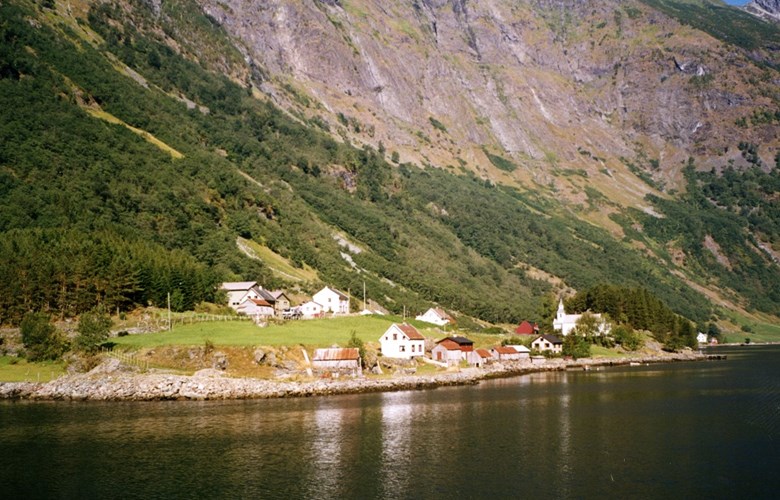 Bakka, seen towards the north. To the left is holding #2, whereas holdings # 1, 4, and 5 are located further back. Down by the fjord lived crofters and sea crofters.

Bakka and Tufto are old farms. After the Black Death, 1349-50, both farms were deserted for a long period. Only in the tax register of 1563 do we have proof that the places were once more settled. For a long while there was only one farm, but about 1700 Tufto was separated as a farm, and at Bakka there were three holdings. As the 18th century progressed, the population increased significantly, and about 1850 there were four farmers, 14 crofters and about 70 people in all. Tufto had one farmer, three crofters and some 30 people.

The track up to the mountain farm begins down by the fjord slightly to the west of the river Tuftaelvi, slopes upwards and northwards past a rock-scree to about 200 metres above sea level. Then it cuts further up and in a southwesterly direction to a point about 600 metres above sea level. From this point the track turns northwards again and zigzags up a steep section. At some places rock walls have been built. According to an old document, a man called Ivar Andersen Tufte put in a lot of work and effort on this track in the mid-18th century by blasting. In the steep section the track follows the terrain nicely, but man and horse both had to be sure-footed. A horse once fell off the track at this place it has been said.

Rimstigen is nicely located on a slope just north of the river Tuftaelvi, 725 metres above sea level. There are 11 old buildings and remnants of foundation walls. The farm was in full use until about 1900. The last person to use the farm was the crofter Peder Flæthe who stayed there during the Second World War.

The name Rimstigen has been used both about the farm and the track leading up to it. Stig means track. The first part of the wordrimprobably refers to the Old Norse word rim which could mean a long wooden board or wooden picket. This leads us to the interpretation that farmers used wooden logs as steps in a ladder before they blasted the rock and made big rock walls in the steepest section of the track. 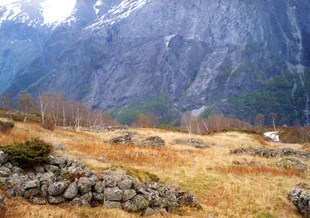 About the highest point of the track, 1300 metres above sea level, there is a fine view towards the valley of Jordalen and the Vikafjellet mountains. Close to the track we find some reindeer pitfalls, and further south there are more. From the highest point the track descends gradually to a place 850 metres above sea level. There we find foundation walls of old summer farms used until about 1900. There are excellent pastures covering a wide area. People used this farm for hundreds of years, except for a period after the Black Death.

The cheese was transported in special cheese crates. It was usual to pack ten brown cheeses - each weighing four kilos - in a crate, and the horse had one crate on either side of the back. The cheeses had to be firmly packed to avoid any unstable movement in the crates. Normally the farmers did not keep any cows at their home farms during the summer months, and for this reason, sour milk and "brimost" (a type of brown cheese) was transported by pack-horses back home. Then they used a completely tight, oval-shaped wooden crate, called væteflaske (a "koll").

When they transported firewood, they used a contraption called a kjesse. They used an oval-shaped, strong wicker, tying wires in a criss-cross pattern to form a strong mat. Two such wickers were tied together and the firewood was placed in between. In this way the horse got a stable load on both sides of the back.

The tracks up to the mountain farms were mostly made with as steady a gradient as possible, but still there were many steep sections. For this reason, the horse needed extra strong harness. It had a neck strap, a belly strap and an especially strong loin strap.

In steep downhill sections the loin strap could slide down under the haunches of the horse, making it hard for the horse to keep its footing. In order to solve this problem a so-called halastokk (tail stick) was used. It was a solid stick placed under the tail of the horse with straps attached to the rest of the harness. This stick was steady, and the horse was not hindered in its movements in any way. A mountain ridge in Aurland is called Halastokk-herdi. (the tail stick shoulder). At this spot, just before a steep downhill section, the tail stick was attached to the harness.