The 'marsh men' at Stadlandet

According to the Voting Rights Act from 1814, the right to vote in rural areas was limited to officials and land owners. The Act did not require any minimum size of the properties. This Act lasted until 1884. 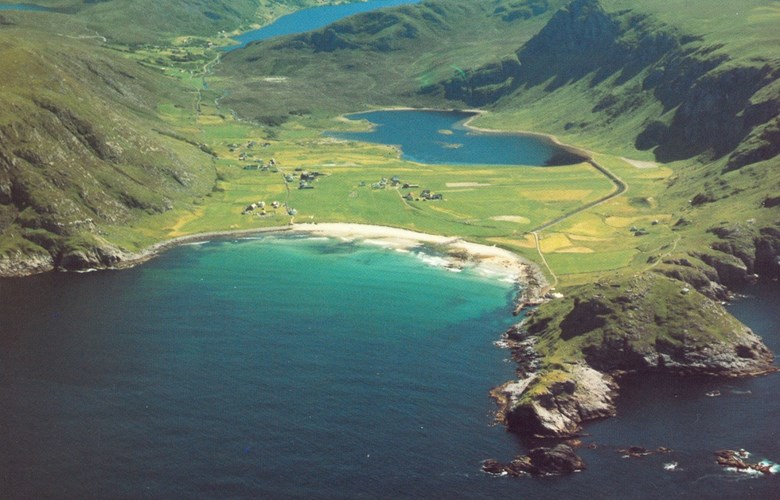 View of Ervik and the valley of Morkadalen at Stadlandet. It was in this valley that city people became land owners to obtain the right to vote.

A loophole in the law

In the 1860s, there were many men who tried to obtain the right to vote by buying or leasing land. As the Constitution said nothing about the size of the land, or that there was any requirement that the owner had to live at the place, initiatives were taken in many places in the country to establish a so-calledmarsh men systemwhereby people from towns could buy a parcel of land in the country and thus obtain the right to vote.

The marsh men at Stadlandet

Sofus Arctander was a lawyer, and while still a student, he worked for a period as a resident teacher in the Nordfjord area. He bought the deserted farm Hanekam in the valley of Morkadalen at Stadlandet in 1867 at an auction for 10 "spesidalar". In 1870, when he was old enough to vote, he sold ten parcels of land of equal size to his friends for five "spesidalar". The 11th parcel he kept for himself.

As all these persons after a while became state officials and thereby obtained the right to vote, they either sold or gave away their parts to others.

In 1884, the voting right was extended, and the whole "marsh men system" was no longer needed. After a while all the parcels were sold. After some years a couple settled down on the farm and started to buy the other parcels one by one. They built houses, bought animals, and ran the farm under the new name of Nygård. In 1938, the Arctander parcel was also included in the property, when the widow after Sofus Arctander gave the parcel for free to the farmer.

Sofus Anton Birger Arctander (1845-1925), the student who initiated the "marsh men system" at Stadlandet. Arctander was in the period from 1884 to 1888 Minister in the first liberal government and in the period between 1890 and 1901 he was mayor of Bergen.
Owner: I <i>Norsk Allkunnebok.</i> - Date: Ukjend. - Photographer: Ukjend.
I <i>Norsk Allkunnebok.</i>
Ukjend.
Ukjend.