Nedstryn church is a wooden longchurch on the farm of Kyrkjeeide in the municipality of Stryn. The church, with a seating capacity of 400, was consecrated on 6 November, 1859 by the dean Wilhelm Frimann Koren. Captain Ludolph Rolfsen made the designs based on the model designs by the architect Linstow. Nedstryn church is a ¿sokn" church for the Nedstryn ¿Sokn" in the Stryn parish. 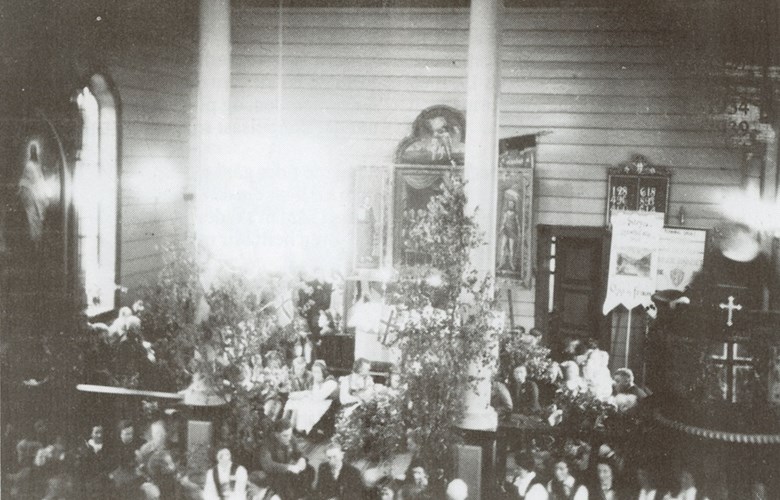 The church site is located some distance from the centre of Stryn and the residential areas by the fjord where most people live nowadays. However, the church site has traditionally been the meeting place for the Stryn inhabitants. Important archaeological finds on the Kyrkjeeide farm confirm that this was a meeting place long time before it became a church site. This area was also sparsely populated at the time when the present church was built, and the matter of moving the church site was never raised.

At first the idea was to build an octagonal church to replace the 17th century church, but nobody wanted to be responsible for such a construction which was based on a draft design from the Ministry of Church Affairs. Consequently, the church committee gave the responsibility to a local master builder, Gjert Lien from Eid. He accepted the commission to erect a longchurch, designed by captain Rolfsen from Mindresunde. The old church was torn down and sold at an auction. As for the construction work, it was said that many experienced workers took part, working at such a speed that it took less than a year to complete the building before it was consecrated in November, 1859. The farmers of Kyrkjeeide and Ytreeide were given the task of providing stones for the foundation wall, and therefore were exempted from any more building duties.

Nedstryn church is a longchurch, but somewhat atypical in the form as the steeple is placed above the front part of the porch. On many of the longchurches erected in the second half of the 19th century, the steeple was built close to or even in the outer wall of the nave. The interior of the church remained unpainted until 1903. When it finally was painted, the colours used were rather garish. Also when the altarpiece finally got a frame, its style clashed with the rest of the church, which many people reacted to. In 1904, stoves were installed, and new pews were made. In 1934, the time had come for a major restoration, and the church was repainted in the colours we see today. 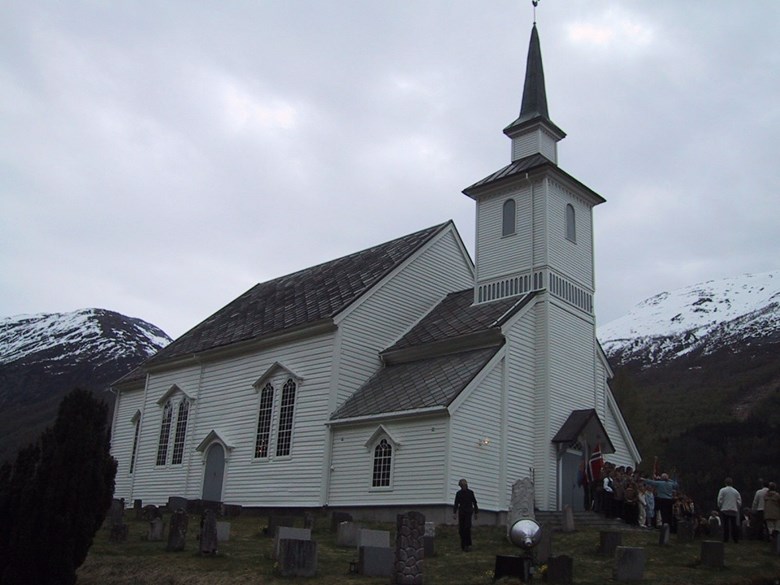 During this restoration work, the colour expert and artist Roar Hauglid discovered the old altarpiece which had been stored in the attic. In his opinion, this would be better suited in the church room than the one they had. His initiative was met with mixed feelings, leading to rather heated discussions among the congregation members. The matter was put on the agenda for a congregational meeting, and the debate was extensively covered in the local press. The vicar Eilert Eriksen wanted the 17th-century altarpiece to get back its place in the chancel, and this suggestion was supported by Hauglid. After a period of fierce debates in the congregation, it was eventually decided to return the old altarpiece to its place of honour. In the first instance, this was called a trial period, but the altarpiece was never taken down. The altarpiece from 1913 made by Ferdinand Kierulf Tranaas, showing the resurrection of Jesus, was removed to the northern chancel wall. 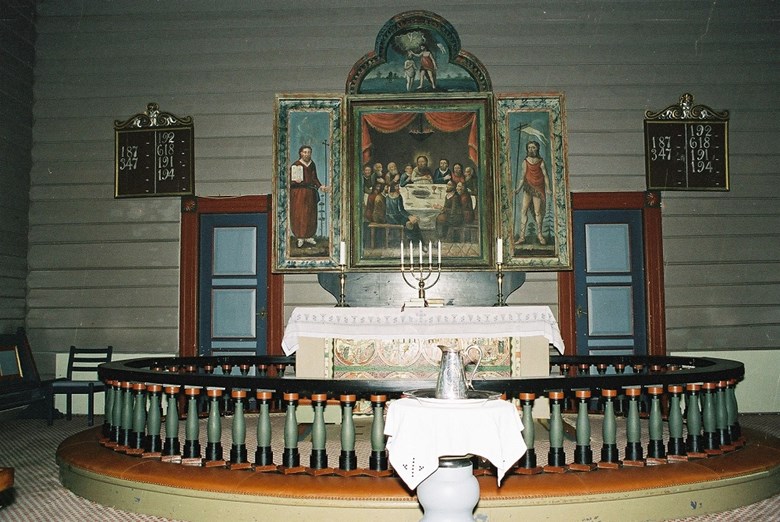 The main colour scheme in the church is grey and blue. The colour grey is used on the walls and in the ceiling both in the nave and chancel. The pews are painted blue with pale-blue fields framed in red. This colour scheme has later been criticized by the Directorate for Cultural Heritage as somewhat sombre in tone, but its recommendation to replace the colours by lighter, purer colours has been turned down. The windows have details which enhance the fine architecture of the church. On both sides at the front of the nave, there are two so-called cathedral windows in stained-glass leads and with stained-glass paintings in the middle. These were made by Borger Haugli in 1934, portraying the evangelists, the disciples as well as depicting the most famous stories and parables in the Bible. Every single pane is a gift from villagers, who in return have got their names at the bottom of the painting. 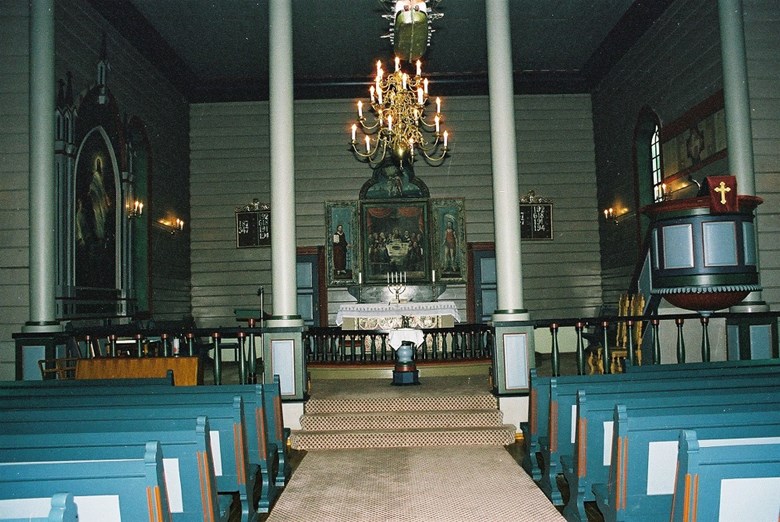 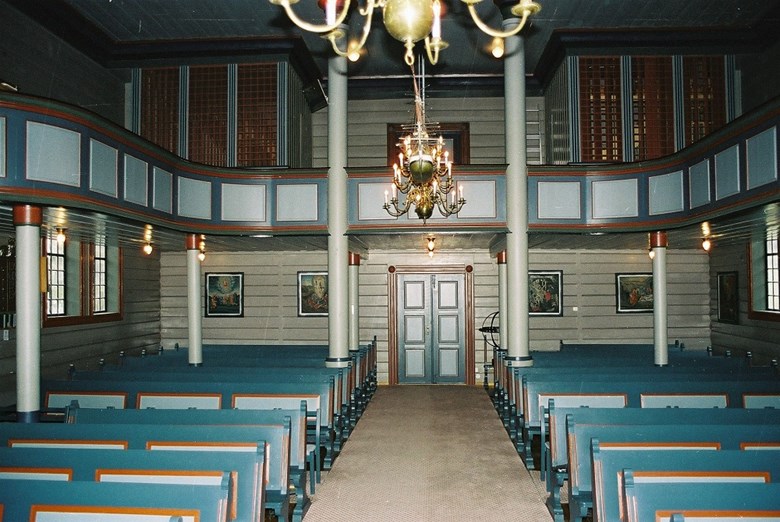 Dominant elements in the church room are two solid columns running from floor to ceiling at the entrance to the nave, and also the columns at the chancel doorway. A number of smaller columns support the gallery which protrudes at the sides and is rounded off near the walls. The nave itself has entrances both through the porch as well as in each side wall. The porch is spacious and has staircases leading up to the gallery on both sides. The vestries have remained unchanged since the church was new, and these are built in the extension of the chancel. The church has had electric lighting since 1920, but the old wood stoves were not replaced by electric stoves until 1959. In 1963, a mortuary room and toilet facilities were built in the basement. 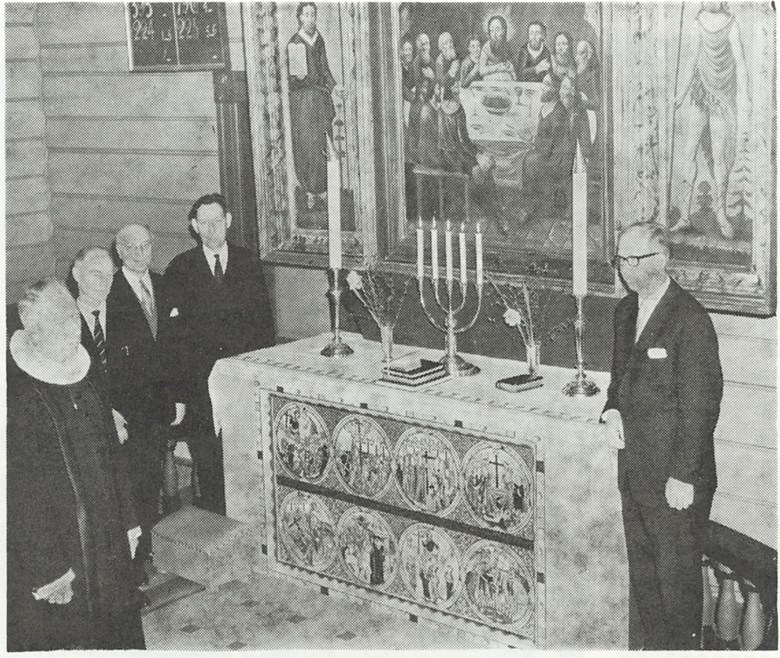 The pulpit and the font date from 1859. The silver baptismal bowl in silver and the holy water ewer both probably date from 1859. The alms pouch dates from the late 19th century, but the sword is undated.
The four paintings from 1795 have biblical motifs such as the taking-down of Jesus from the cross, and His burial. The portrait from 1860 shows Gabriel Andreas Heiberg (1814-1879), vicar in Stryn 1853-1865.
The organ from 1959 has 17 registers, built by J. H. Jørgensen. There are two church bells from the Middle Ages.

The year was 1904 and an organ had just been installed on the gallery of the Nedstryn church. It would be used for the first time for the Sunday service, and the church was filled to capacity. About halfway through the sermon, frightening things started to happen, and it was as if the whole church building shook in its foundations. Those who were sitting down in the nave thought that the gallery was about to fall down over their heads. People cried out, thinking that the gallery floor could not support the weight of the new organ. Many panicked and actually jumped down from the gallery, and those who were sitting in the pews downstairs ran for their lives. In a short while, the church was empty, but the gallery was intact.

Eventually people realized that there must have been natural causes for the chaos. It was in fact an earthquake that had caused the shaking. The only person to remain calm during this commotion with some composure was the vicar Johan Bolstad. He asked everyone to get back into the church so he could conclude the service. People entered the church again, but they were still in a state of shock. A short time afterwards, extra columns were installed under the gallery for safety¿s sake.

This altar frontal is a copy made in 1965 of the original frontal from 1310 which belonged to the oldest church in Stryn. The copy is made by the curator Bjørn Kaland and the painter Ole-Gabriel Dahl. The inscriptions on the eight medallions are to be read from left to right, starting at the lower row. All the texts start with the word 'here' and are written in Old Norse. The first inscription is: 'Her byrjar sogin ens helga cros, so kem Kosdroa hernamn han af Jorsalalande til Serklandz.' Translated into English: 'Here starts the story of the Holy Cross. (The Persian king) Cosdroe took the cross by force from the land of Jerusalem to the land of the Saracens.'
Owner: I <i>Jul i Nordfjord 1965.</i> - Date: 1965. - Photographer: J. Øvresæt.
I <i>Jul i Nordfjord 1965.</i>
1965.
J. Øvresæt.

The altarpiece from 1610 was originally a catechism altarpiece. This type of altarpiece contains the key texts from the Christian faith: The Lord's Prayer and the institution words for the Holy Communion. The inscription at the back is: 'Elling Jakobson - Klement Olafsøn - Anno 1610'. These are either the names of those who financed the altarpiece or those who made it. In 1801, the altarpiece was painted over, but the old letters are still visible. The main picture shows the Holy Communion, as well as Moses with the slate with the Ten Commandments. To the right of Moses is John the Baptist. There is an inscription: 'Painted by Johan Carl Christian Michaelsen and Renhoff Casperrsen Tonning. Anno 1801.'
Owner: Stryn fellesråd. - Date: 2003. - Photographer: Svein F. Rønne.
Stryn fellesråd.
2003.
Svein F. Rønne.

From the interior of the nave seen towards the chancel. The main colour scheme is grey and blue. The walls and the ceilings in both the nave and the chancel are grey. The pews are blue with pale-blue fields, framed by red. On the left-hand side of the chancel hangs the painting by Ferdinand Tranaas Kierulf which served as an altarpiece in the years 1919-1931. The votive ship model hanging down from the ceiling dates from before 1859.
Owner: Stryn fellesråd. - Date: 2003. - Photographer: Svein F. Rønne.
Stryn fellesråd.
2003.
Svein F. Rønne.

From the interior of the nave seen towards the porch and the gallery. Dominant features in the church room are the two solid columns running from floor to ceiling at the entrance to the nave. On the wall under the gallery are four paintings with biblical motifs.
Owner: Stryn fellesråd. - Date: 2003. - Photographer: Svein F. Rønne.
Stryn fellesråd.
2003.
Svein F. Rønne.

From the handover of the altar frontal - 'antemensal' - on Palm Sunday, 11 April, 1965. The printer J. W. Eide, no. 3 from the left, hands over the frontal to the congregation. The vicar Jostein Hatlebrekke, the mayor Knut Mork, chairman of the 'sokn' council Hans Espeland, and editor Ingemund Fænn at the receiving end. This altar frontal is a copy made in 1965 of the original frontal from 1310 which belonged to the oldest church in Stryn. The copy is made by the curator Bjørn Kaland and the painter Ole-Gabriel Dahl. The inscriptions on the eight medallions are to be read from left to right, starting at the lower row. All the texts start with the word 'here' and are written in Old Norse. The first inscription is: 'Her byrjar sogin ens helga cros, so kem Kosdroa hernamn han af Jorsalalande til Serklandz.' Translated into English: 'Here starts the story of the Holy Cross. (The Persian king) Cosdroe took the cross by force from the land of Jerusalem to the land of the Saracens.'
Owner: I <i>Jul i Nordfjord 1965.</i> - Date: 11.04.1965. - Photographer: J. Øvresæt.
I <i>Jul i Nordfjord 1965.</i>
11.04.1965.
J. Øvresæt.

Medallion no. 6, no. 2 from the left in the top row has the following inscription:'Her kem Eraklius til Jorsalaborgar ok ser ekki port à saker prydi sinar.' Translated: 'Here comes (the Christian king) Heraklius (Heraclitus?) to the city walls of Jerusalem and fails to find the gate because of his arrogance.'
Owner: I <i>Jul i Nordfjord 1965.</i> - Date: 1965. - Photographer: J. Øvresæt.
I <i>Jul i Nordfjord 1965.</i>
1965.
J. Øvresæt.