Stongfjorden was one of the first industrial villages in the county of Sogn og Fjordane, with the first aluminium plant in Scandinavia. The industrial development began in 1897, and grew parallel to the development at Vadheim. In 1906, the BACO (British Aluminium Company) built the first aluminium plant in Scandinavia there. Only in 1946 was Stongfjorden connected by road to the municipal centre of Askvoll. 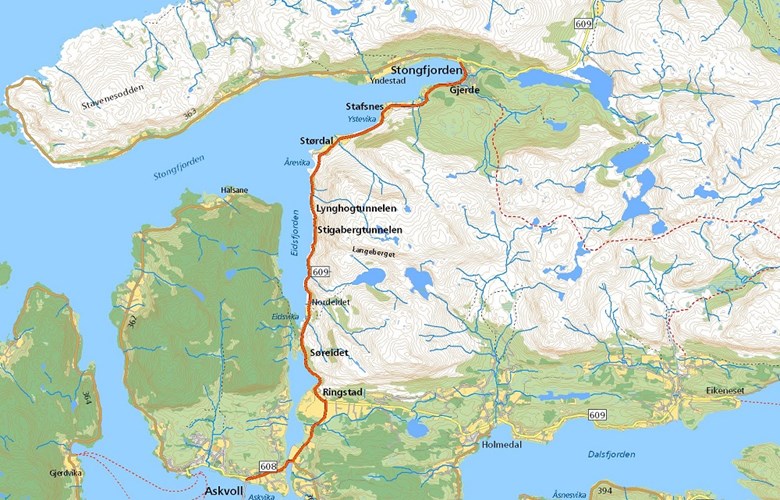 The road Askvoll-Stongfjorden, was complete in 1947. The centre of Askvoll is on a peninsula. A somewhat unusual fjord starts at Askvika near Askvoll, runs eastwards, bends straight northwards through a shallow sound (Straumen), and goes on with the wider parts Leira and Kyllaren. From the north, a part of the Stongfjord runs straight southwards to a low isthmus between the Eidsfjorden and Kyllaren. The Stongfjord road is built along these two fjords.

The road Askvoll-Stongfjorden was planned in the latter part of the 1800s. In 1893, Askvoll received a grant from the county to rebuild the bridge of Strømsbrua at Askvoll, as a part of the whole project. The first part of the road Askvoll-Stongfjorden was in the road plan of 1907. In 1910, Askvoll asked that the project be given higher priority, since there was industrial activity at Stongfjorden. This made the road a necessity. But the county council found that the project could not be moved up on the list.

The project was given ordinary appropriations only in 1935-36. Stongfjorden (Gjerde)-Stafnes was built with emergency funds in 1921-22 and 1924-25, and was finished in 1927. In the late 1930s, Stafnes-Størdal was built. The section Størdal-Søreide was finished in 1947, and between Søreide and Ringstad improvements were being made at the same time. The road between Askvoll and Ringstad was old.

Activity during the war

During the Second World War, the Germans speeded up some important road projects. They were Totland-Måløy, Førde-Florø, Årdalstangen-Årdal. Some of the ordinary road projects were also partly under construction, such as Leikanger-Hella, Osen-Dale, Vetlefjorden-Tjugum, and Stongfjorden-Askvoll. During the war there was for a time tunnel work at Eidsfjorden. After a stop, work was started again in February of 1945, and the road between Stongfjorden and Askvoll was finished in 1946. 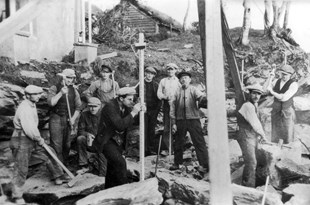 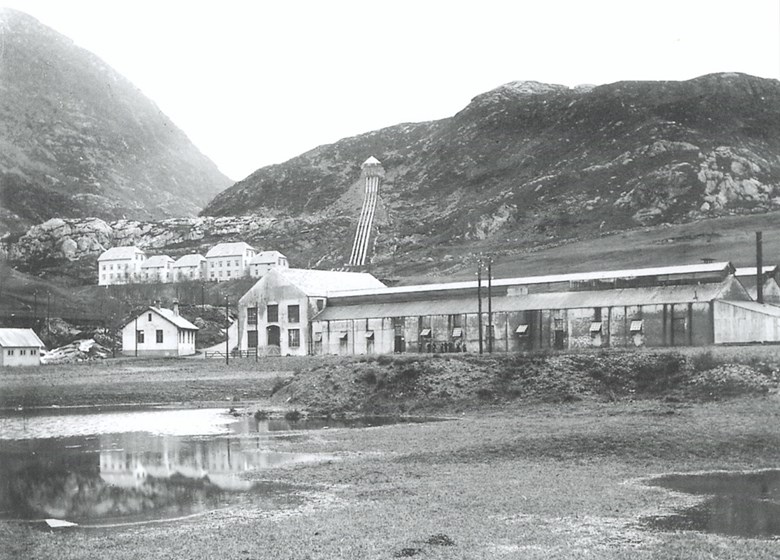 Albert Nistad from Dale was in the autumn of 1944 doing masonry work a short distance to the north of the tunnel at Stegaberget at Eidsfjorden. He remembers that he one morning when he arrived at work, saw that a German convoy had taken shelter at Eidsfjorden. A short time before noon he heard the sound of aircraft engines, and he sought refuge in the tunnel. There was an inferno of shooting, he says, and there were as many as 37 planes in the air. One of the aircrafts was hit and was heading for the tunnel. It landed in the water below and exploded. The Germans disappeared, but more boats arrived later. One of the ships was bombed by an aircraft coming down along the mountainside. The ship went to pieces and sank after a short time. Roadwork was in other words not without risk in those times.

A trip between Stongfjorden and Askvoll took a while before the road was built. Some "rowed under Eidet", into the Eidsfjord, and walked through the farm of Fristad. Others went by motorboat westwards on the Stongfjord and southwards through the sound of Granesundet. The factory of the BACO had a bigger passenger boat, the "Stangfjord".

Some chose to walk all the way. When the Ytre Fjordane Kraftlag (electric power company) in the early 1920s built the power line between Stongfjorden and Askvoll across the mountain of Eidsfjordfjellet, they put up two strong, impregnated ladders on the steepest rocks. It happened that the fittest hiker pulled a bicycle up the ladders in order to make use of the road sections which had been finished. In that case they had to hike some distance in the mountain across Lynghogen. One of the ladders is still there. In the road finished in 1946, there are two tunnels: the Stigabergtunnelen and the Lynghogtunnelen. The former had its name from the ladders.

A part of the "coast main road" (west)

The road, which at the time was called "main road route 600", was a part of the main road along the coast, from state road 570 at Flekke to Tysse-Holmedal-Ringstad-Stongfjorden, Ålen-Vevring-Eikefjord, Grov, Straumsnes-Svelgen, Bortne, Elde, Bryggja, Maurstadeidet. Most of this planned coastal road is not finished. 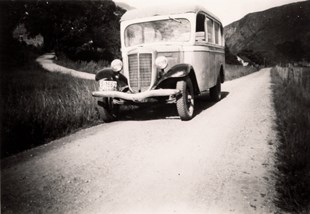 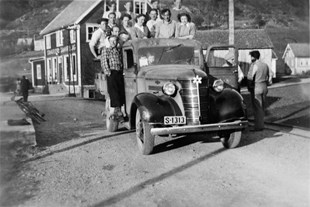 A/S Stangfjorden Elektrokemiske Fabriker in 1908. Before this factory was built, peat coal and iodine were produced, but with little profit. Stongfjorden had streetlights when the aluminium factory started up. The built-up area at Stongfjorden had more inhabitants than Førde in 1930. However, the factory was too small to make a profit, so it was closed down in 1945.
Owner: I Paul-Stang-samlinga i Fylkesarkivet. - Date: 1908-1923. - Photographer: Paul Stang
I Paul-Stang-samlinga i Fylkesarkivet.
1908-1923.
Paul Stang

Aerial photo with the farm of Melen in the foreground and the fjords of Leira and Kyllaren. In the background the Eidsfjorden/Stongfjorden are barely visible. The road closest to the crossing goes toward Helle and Vårdal. The other is the Stongfjord road. From the crossing the road goes across the Straumen bridge to Askvoll. It happened that people from Stongfjorden rowed along the Eidsfjorden on their way to Askvoll and continued on foot across the isthmus and on along the west side of the Kyllaren and Leira. The picture was taken a short time after the Stongfjord road was opened for traffic in 1947.
Owner: Eilif Strømmen - Date: 1947 - Photographer: Telemark flyselskap A/S
Eilif Strømmen
1947
Telemark flyselskap A/S

The first bus at Askvoll. The picture was taken some time around 1948-49. The driver was Toralf Vie. Firda Billag (motor company) had since 1946 been responsible for the bus service in the Dalsfjord area and western Sogn, and when the road was built, there was a scheduled daily service between Askvoll and Stongfjorden.
Owner: Firda sjåførforening. Statens vegvesen Region Vest - Date: 1948-49 - Photographer: Ukjend
Firda sjåførforening. Statens vegvesen Region Vest
1948-49
Ukjend