The Kråkenesveg road in Vågsøy

Far to the west towards the ocean lies the hamlet of Kråkenes. A cart road to this place was built in the 1940s. The road could hardly be used in the winter months, and only in 1997, did the hamlet get a decent road connection south to Kvalheim and Måløy. 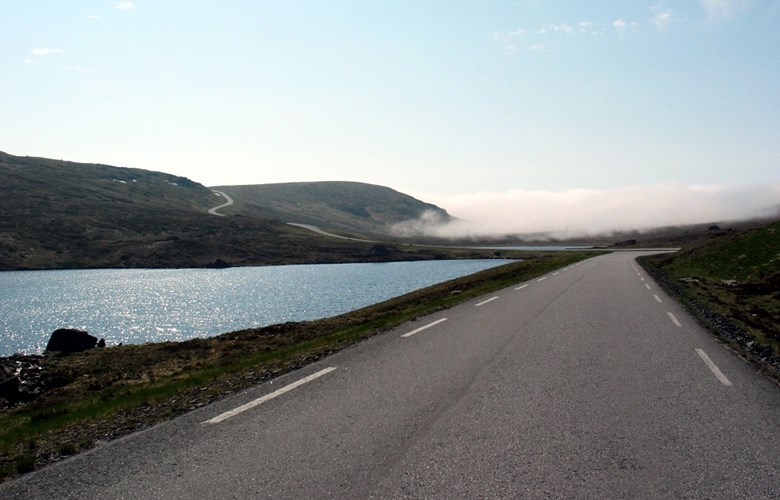 The new Kråkenes road is nicely located in the terrain, and people at Kråkenes are well pleased with the road standard.

The Kråkenes hamlet gets its first road

In 1906, the municipal council of the then municipality of Selje allocated 1/5 of the cost estimate of 3600 kroner to build a road from the quay at Kråkenes to the farmyard of Jakob A. Kråkenes. The condition for the allocation was that the county allocated 1/5, and the interested parties - the farmers - covered the rest. The municipal council decided to take over the maintenance of the road once it was completed. The road was about 1.5 kilometres long. The road had been included in the road plan of 1905 as a rural road without any state funding, and the county governor allocated 2/10 from the county road account.

Demand for a road to Kvalheim

The road was important, not only for Jakob A. Kråkenes, but also for the other seven holdings at Kråkenes. Even if the allocation from the county governor was lower than expected, the road was completed in 1908. In 1919, the municipal council demanded that the road should be extended to Kvalheim, but many years were to pass before this road was built.

Road instead of harbour

In the 1930s, there were plans to build a harbour at Kråkenes, but the local inhabitants preferred a road. The harbour means were therefore used to build a road from Kråkenes to Kvalheim. In addition, they were allocated means from the county road fund. The roadwork started on 10 September 1935. The Germans established a radar station at Kråkenes in March 1942. This meant that the roadwork to Kråkenes was speeded up, and it became possible to drive on the road in 1941. After the war, the roadwork was resumed, and it was completed on 11 November 1950. The road was an important step forward for the small village, but there was also a downside. It was hard to keep the road open when it snowed. In the 1960s, the people of Kråkenes applied for means to improve the road and to protect it against snowdrifts and avalanches, but without any success. Closed road was something people simply had to put up with in wintertime for many years. The Kråkenes road was not prioritized.

Long sections of the road were located in difficult terrain, particularly the 3.2 kilometres from Kråkenesfjellet to Kråkenes, where it was problematic to clear the road of snow. In the 1960s, close to 80 people lived at Kråkenes. Anders Kråkenes was one of those who were surprised by bad winter weather in the mountains. Accompanied by his eight-year-old son and an elderly man, he drove into a snowdrift and got stuck. They were not sufficiently dressed for such an eventuality, but after five hours, Anders and his son managed to walk through the storm to the nearest house. The elderly man remained in the car as he could not walk in the blizzard, but he was eventually rescued.

The old road across the mountains was nothing but a cart road, and could barely be used as a car road in the summer months. In 1989, the county communication committee approved plans for improvements and alterations, mainly along the existing road. The new road goes partly along the old road. From the mountain of Kråkenesfjellet down to Kråkenes a new road was built. The whole length is 6.8 kilometres with a road width of four metres. The roadwork amounted to 28 million kroner, financed by the county with 20 million kroner and the state with eight million kroner. The construction work for the Movatn-Vardnebba part was started in August 1993. In addition, the Vågsøy municipality improved and financed 400 metres towards Kråkenes. On 27 September 1997, the new Kråkenes road was opened by the then chairman of the county council, Sjur Hopperstad. 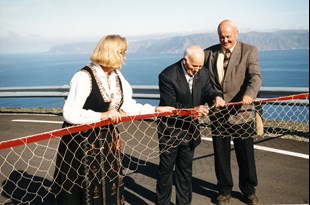 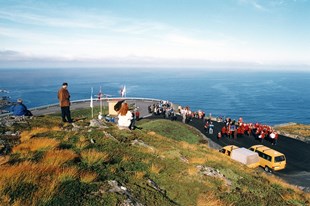 The people of Kråkenes had made their own "ribbon" for the opening of the road, and one of the ingredients was an old salmon net. Even if salmon fishing no longer is an important industry at Kråkenes, the salmon net and the road symbolize new times and new challenges. At the ribbon cutting ceremony: Mayor Liv Henjum, chairman of the county council Sjur Hopperstad and chief road administrator for the county Lars Lefdal.
Owner: Statens vegvesen Region Vest - Date: 1997. - Photographer: Olav Handeland.
Statens vegvesen Region Vest
1997.
Olav Handeland.

In this picture people of Kråkenes are gathered for the road opening on 27 September 1997. The chairman of the county council Sjur Hopperstad opened the road, saying that he felt sorry for people who did not have the safety implied in a decent road. He also stated that the economic framework for roads in the outlying areas was much too low.
Owner: Statens vegvesen Region Vest. - Date: 1997. - Photographer: Olav Handeland.
Statens vegvesen Region Vest.
1997.
Olav Handeland.