In 1900 the topographer Amund Helland described the river of Kvinnaelva with these few words: ".. a short watercourse, running southwards - with the picturesque Kvinnefos cascading into the Sognefjord." A landscape protection report a hundred years later follows up with: "The Kvinnefossen waterfall (..) one of the finest waterfalls along the Sognefjord."

From the plunge pool of the waterfall Kvinnefossen, the river runs steeply down to the fjord. When the river runs high, the water splits in two by a crag at the lowest part. According to the local historian Bøthun (1955), the shape of a woman then appears. Look closely at this picture and click to make a bigger picture. Some people say that they can see the upper body and face of a woman in the middle of the river down by the fjord.

Kvinnefossen is the name of the waterfall in the Kvinna watercourse close to the main road about two kilometres from the ferry quay at Hella. The waterfall has a free fall of 120 metres down into the plunge pool (hollow) called Kvinnagryta, and for the last stretch the river flows steeply down to the fjord. The catchment area of the Kvinna watercourse is bounded by the mountain area of Storholten-Troeggi-Midteggi- Hestfjellet-Mælen. There are no lakes or tarns in the watercourse. The tributary river Friseta joins Kvinna about 300 metres above the top of the waterfall. The river runs at its maximum in the snow-melting season of spring and early summer, but otherwise it varies depending on the precipitation.

The Kvinna watercourse and the Kvinnefoss waterfall have been protected against any hydroelectric development since 1973. In addition, the waterfall has a central place in a plan for a landscape protection area comprising the whole watercourse east to the farm of Suppam. The protection proposition from 2001 describes the whole area as highly interesting in terms of biology and natural history with few encroachments in recent years. The waterfall and the adjacent area are listed with the status of national value. 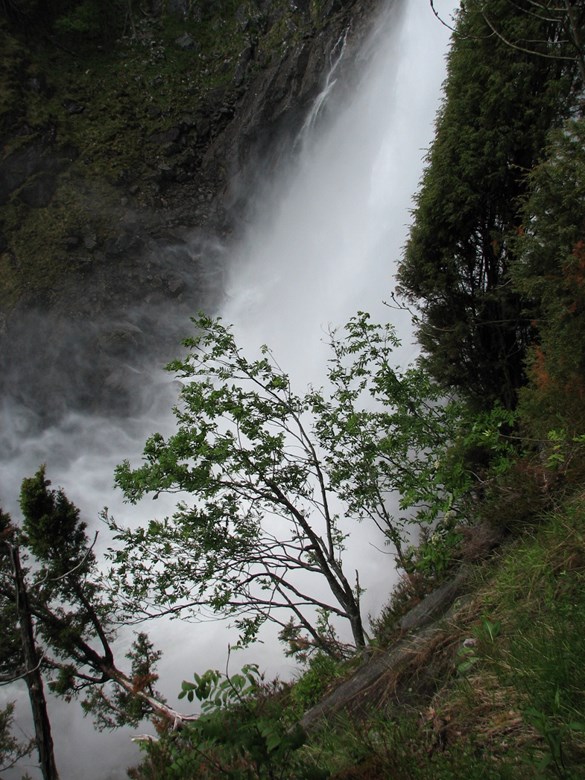 The river runs in a narrow gully from the wall. For this reason there was no need for a long bridge when the road was built in the mid-1950s. On the other hand, a high wall had to be built up to the eastern abutment. The wall has a maximum height of 12 metres.

"the mist drifts far out"

The road was opened for traffic in the autumn of 1956. During the spring flood in May the same year the local newspaper Sogn og Fjordane ran a short article about the mist drift. The Public Roads Administration thought it was necessary to do something to prevent people from getting soaked to the skin by the mist from the waterfall. "When the river runs high," the paper wrote, "the mist drifts far out into the bay. In the concrete bridge some iron bars are fastened, and the road authorities think that it may be necessary to put up a glass wall there. Otherwise we shall have to see what happens when spring comes. The bridge is constructed in such a way as to minimize the spray from the waterfall, but there is bound to be some mist."

These were some thoughts that were put forward before the road was opened for traffic. As far as we know, no such glass wall was ever constructed as a protection against the mist drift, or any other protection for that matter.

From time immemorial the Sognefjord has been rich in salmon. The salmon enters the fjord in spring and swims up the rivers to spawn and returns on its migration to the ocean in the autumn. From days of old the bay under the waterfall has been an ideal place for fishing salmon. People used to say that the salmon came close to the waterfall to get rid of the lice.

Salmon was caught with a wedge-shaped seine at Kvinnefossen. This is a type of seine by which the salmon is led along a net from land out to the seine and into two chambers (wedges) where the salmon is caught. The seine is stretched between two big barrels held in place by means of a thick wire between them, as well as with wires attached to land and to specially designed anchors on the sea floor.

36 salmon in one catch

The fishermen saw to the seine two-three times a day. They called it "drying the seine" when they lifted it to get the catch into the boat. In favourable fishing weather there could be a number of salmon in the seine, varying in size from a couple of kilos to more than 20 kilos. Mikkel Sjur Eitun (born 1941) took part in the fishing at the Kvinna seine from an early age. According to him, the record was 36 salmon in one catch. His own personal record is 26.

In 1995 salmon fishing was brought to an end when the parasite gyrodactolus salaris was observed on salmon in the river Lærdalselva further into the Sognefjord. The drastic countermeasure was to apply poison to the river and forbid the use of seines along the fjord. The measures proved to be effective. The salmon stock in the fjord is picking up again and some of the fishing restrictions have partly been lifted. However, it is highly unlikely that there will be any more wedge-shaped seine salmon fishing at the Kvinnafossen waterfall. The work is no longer profitable.

From time immemorial the river Kvinna has marked the boundary between the municipalities of Leikanger and Balestrand as well as between the farms of Suppam and Eitorn. In 1849 Balestrand was separated from Leikanger to become a municipality in its own right. The farms of Eitorn, Hella, Flæte and Rud were included in Balestrand. In 1964 the same four farms were returned to Leikanger.

About 300 metres above the waterfall there is a footbridge across the river as part of a marked trail from Hella, by way of the mountain farm of Skoparsete and down to Skjeret. From this bridge the river runs in a narrow gap with a couple of short rapids and a pool in a somewhat more open terrain before the big waterfall itself. In the rock a boundary mark between the two farms in the form of a cross with two-three-centimetre-deep holes at the four ends of the cross arms.

Besides the boundary mark in the rock there are a couple of other traces after people and their use of the water and the place. Under a small slab of rock there is a trap consisting of two flat rocks. The upper rock is lifted at an angle by means of three wooden sticks, and one of them has bait attached. When stoat or marten tore at the bait, the stone fell down. The local name for such a trap is "knottafedle". A small piece of one of the sticks can still be seen there. 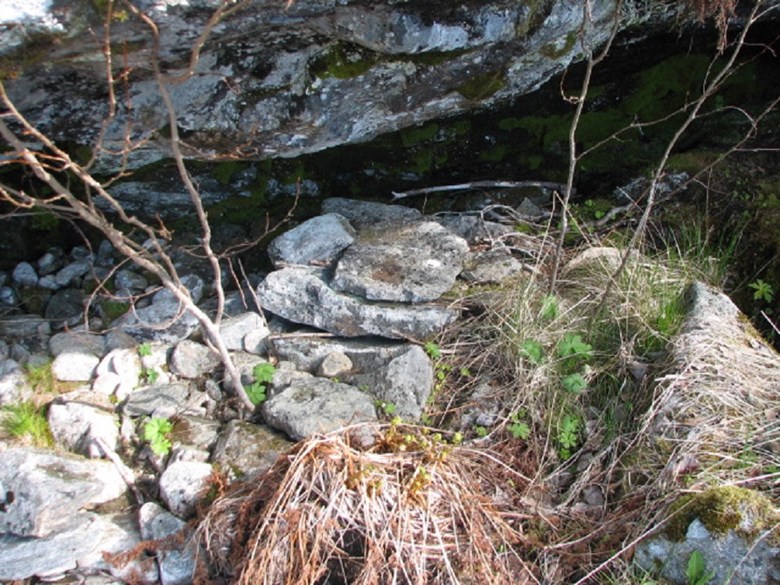 Transportation of firewood on an aerial cable

The name - the shape of a woman

The local history book for Leikanger from 1950 has a reference to the name: "The word Kvinna (the woman) is locally pronounced Kvinnao, and people with local knowledge say that when the river has a certain flow, the water divides on a crag down by the sea, and a clear shape of a woman appears, seemingly carrying something on her back. There can be no doubt about that. When people formerly used to row along the shores, they used their eyes and noticed special features in the landscape. It could be spots in the mountainside looking like something or other and it could be rocks with strange shapes. Sometimes there could be rivers or waterfalls with certain characteristics, and all these peculiarities could be the origin of the place name. There are many examples of this.

In terms of Kvinna, I - that is, the author Per Bøthun - has spoken with people who have been lucky enough to see the shape of a woman in the waterfall when there was a certain flow in the river. If it is possible to see this in the future, remains to be seen. When the road Leikanger - Hella was built with a bridge across the river, much rock had to be blasted, and this may have changed the course of the river so much that the shape of a woman will never more appear." 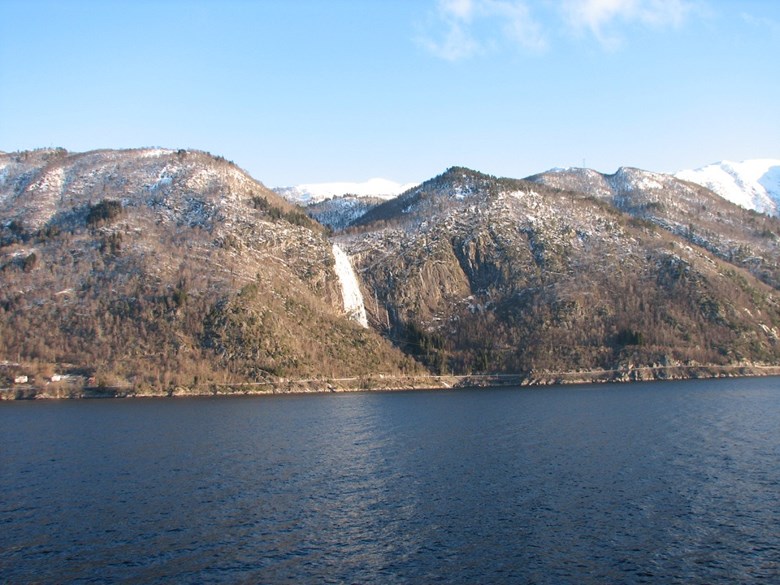 The book also refers to a legend linked to the waterfall Kvinnefossen:

Another interpretation of the name

Some people are of the opinion that the names Kvinna and the Kvinnefossen have nothing to do with the word woman. The name is derived from the Old Norse "kvin", meaning a squeaky sound, made by the river or the waterfall.

The waterfall of Kvinnefossen is well worth a stop - on the public picnic area by the bridge, on the fjord, or by the marked trail in the terrain above the waterfall. The waterfall has an exciting story to tell, both in terms of nature and culture. 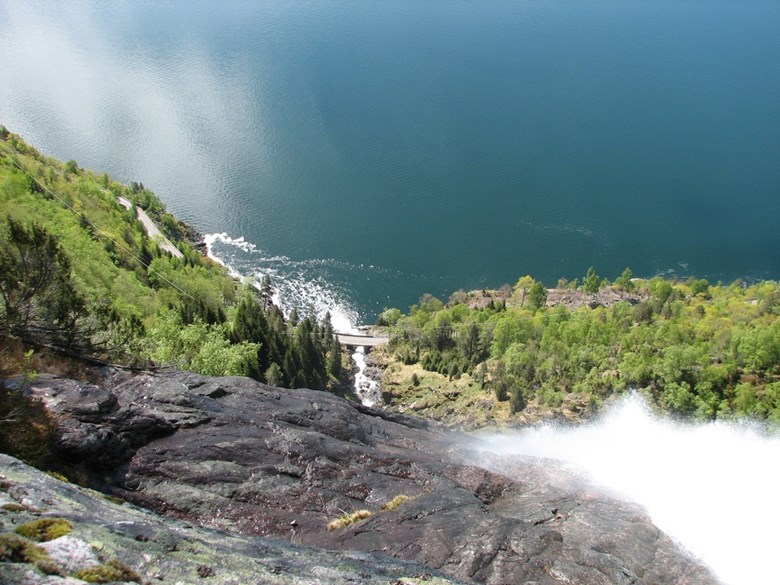 View from the top of the waterfall with a moderate flow of water. The Kvinnefossen waterfall is a fine tourist attraction. Occasionally cruise boats and sightseeing boats take a detour from their normal course and go close up into the bay.
Owner: Fylkesarkivet i Sogn og Fjordane - Date: 2007 - Photographer: Hermund Kleppa
Fylkesarkivet i Sogn og Fjordane
2007
Hermund Kleppa

Under a small slab at the top of the waterfall is a trap from former times. It consists of two flat stones, and the upper stone was lifted at an angle by means of wooden sticks with bait attached. Whenever a marten or a stoat tried to snatch the bait, the upper stone fell down and killed the animal.
Owner: Fylkesarkivet i Sogn og Fjordane - Date: 2007 - Photographer: Hermund Kleppa
Fylkesarkivet i Sogn og Fjordane
2007
Hermund Kleppa

From time immemorial the river Kvinna has marked the boundary between the farms of Suppam and Eitorn, and for some years it also marked the boundary between the municipalities of Leikanger and Balestrand. A boundary marker has been carved into the rock above the waterfall in the form of a cross with drilled holes at the four ends of the cross arms.
Owner: Fylkesarkivet i Sogn og Fjordane - Date: 2007 - Photographer: Hermund Kleppa
Fylkesarkivet i Sogn og Fjordane
2007
Hermund Kleppa