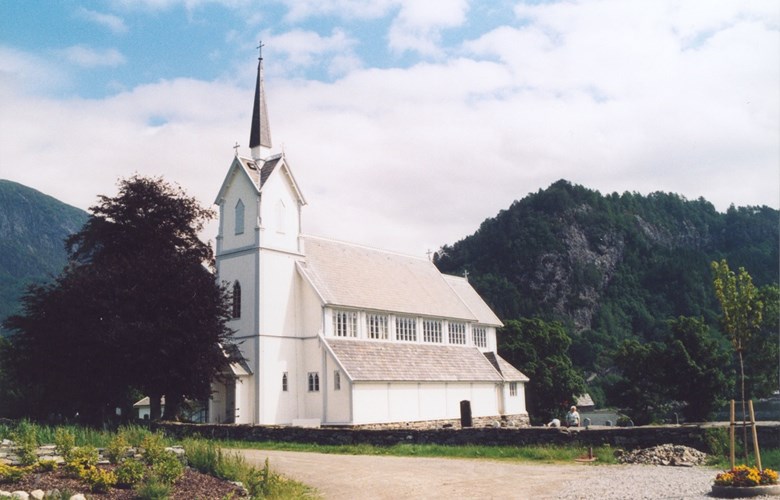 Holmedal church is one of the most elegant, three-naved churches in the county. In the same period the architect Eilert Christian Brodtkorp Christie designed five fairly similar churches in Sogn. He wanted the Holmedal church to be painted yellow, but his wish was turned down.

The Holmedal church is designed by the architect Christie, most famous for his restoration and reconstruction of the Nidaros cathedral in Trondheim. He took on the commission upon the request of doctor Landmark from Dale, who was a member of the building committee. Landmark was a well-educated man with good writing skills, thus being a highly useful person to have on the committee.

In November, 1866, Christie gave an extensive explanation why he designed the church as he did: "According to the size of the congregation, the church should have 396 seats - I have suggested 409 seats. The main design features are similar to my design for a new church in Borgund, Sogn that you have referred to. As shown in my design, the nave is divided in three parts; a higher mid-section where all the windows will be placed, and two lower side sections which will reduce the areas of the roof and the walls. In this way the building will be less exposed to strong winds. As the windows are placed high up on the walls, this will result in giving the church excellent lighting from above, at the same time as it will contribute to giving the whole building a more religious and dignified character."

In the further correspondence with the building committee in Holmedal it is revealed that Christie also was concerned about keeping the expenses down. For this reason, he went in for using cardboard as wind protection under the interior panelling instead of using cog work. This construction method was quite uncommon at that time, but people trusted the architect's advice. In retrospect experts have sometimes wondered why Christie did not care about the dragons in the stave church style, but the most likely explanation might be that he looked upon the dragon as too much of a heathen symbol. 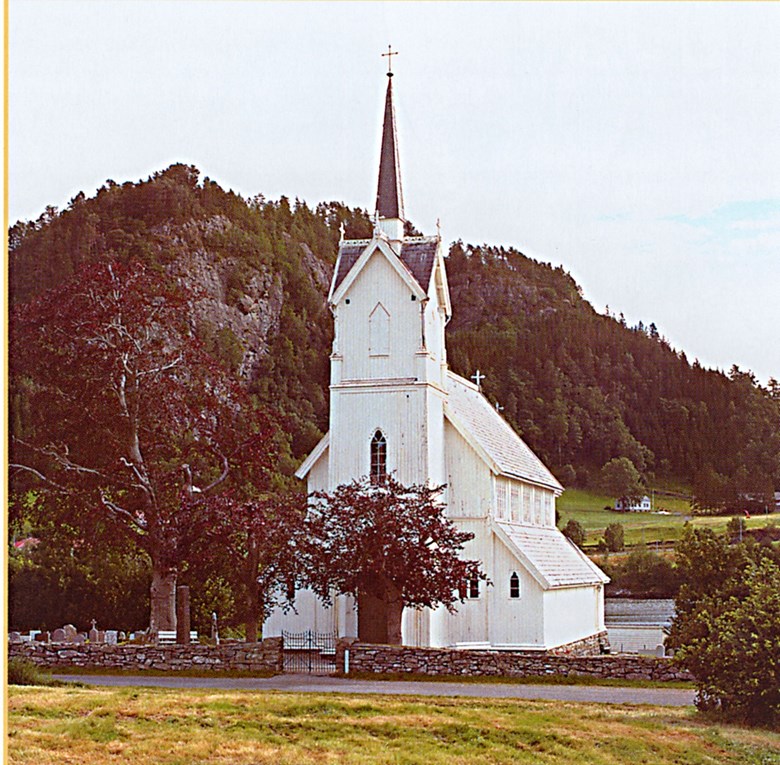 Pulpit on the northern side

In most churches the pulpit is placed on the southern side, in other words, on the right-hand side of the nave when facing the chancel. In Holmedal church the pulpit was placed to the left on the northern side, and some people did not like this at all. The vicar Smith in Dale had strong objections to this solution because the person who was preaching would then be almost blinded by the sunlight. The alternative for the clergyman was to turn away from the congregation he was preaching to, and Smith did not think that this was a good solution. However, in spite of all the objections the pulpit was not moved from its original place. On the other hand, the font was moved from the southern side to the floor in front of the pulpit, which meant that the vicar did not have to baptize the children with his left hand. The church has the usual vestries on either side of the chancel.

The nave itself is close to 16 metres long (about 43 feet) and 11 metres wide (about 36 feet), including the side aisles with a total width of four metres (about 13 feet). Furthest to the east the chancel is rounded off with an apse-inspired three-sided wall encircling the beautiful altarpiece from the 17th century and the altar table. The octagonal altar rail complements the architectural lines in this part of the church. On the eastern wall above the altarpiece there is a square window put on edge showing a dove motif in coloured glass. There are no windows to the east but on the side walls. In the central nave there are five big windows in the upper part of the walls, but none on the walls in the side aisles. All the windows are divided into five sections with a clover-leaf pattern on top. This clover-leaf form is repeated in many places in the interior, for example as a decorative element on the organ, and carvings in the partition corners between the main and side aisles. There are also windows on the west wall, both in the main and side aisles. 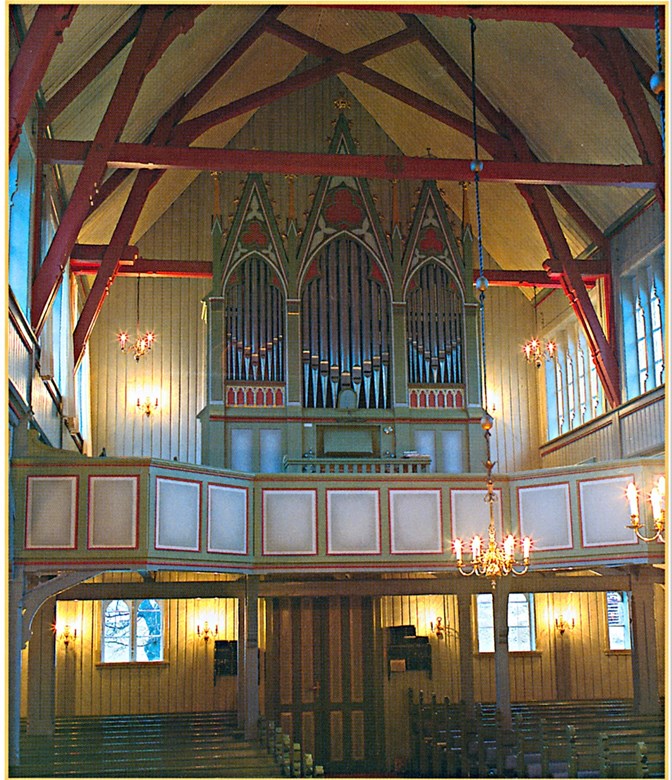 In the late 1920s, the interior of the church was renovated, and the youth organizations in the village raised the necessary means to finance the paint work, a total of 3 200 kroner. At the same time the gallery was extended with protrusions along the sides. The last major renovation was carried out in connection with the centenary / centennial celebration in 1968. The present colour scheme differs much from the original colours of about 1870. Then the interior walls were painted in a light red colour, the simple pews had a pale yellow colour, and both the gallery and the columns below were white. Now green is the predominant colour, both on the pews, the gallery, the supporting columns and the organ. The rafters are painted red, whereas the walls have a pale colour.

The church has a fine location on the old Holmedal farm close to the northern side of the Dalsfjorden. The former church in Holmedal, the old log church from about 1600, was also built on this site. This was a natural location selection, bearing in mind the importance of the fjord as a communication artery. It was also a practical solution when the "jekt" from Christiania (Oslo), carrying the prefabricated building elements for the new church was to be unloaded.
What characterizes this church, compared with the other Christies churches, is the fact that the architect this time did not get the approval to paint the exterior yellow. In Christie's opinion, this was the only true colour, but the people of Holmedal were determined that the church should be painted white. Ever since, the church has always been painted white, but when the church was renovated in the mid-1990s, a grey contrast colour was used on the corner posts and mouldings. At the same time, the steeple was repaired because of leakage problems. The steeple is elegant in its simplicity with a turret base rising high above the central nave. It has four gables with a slim spire.

The altarpiece from 1620 is a so-called coffer altarpiece with rich ornamentation - a pilaster type with gable sections, also above the side sections. This altarpiece is very similar to the ones found in the churches of Bygstad, Viksdalen, Sande and Dale, and is most likely made by the same person, probably in Bergen. This Renaissance altarpiece was only put in its present place in 1968. Until then it had been hanging on the south wall of the church since 1930. Three pictures form the main section, depicting the Holy Communion, the Crucifixion, and the Resurrection, whereas the picture on top represents Christ¿s Ascension. The inscription on the left and central section is taken from the Catechism on the Holy Communion, whereas the inscription to the right is quotes from John 11;25 and Romans 4;25. Above the pictures is a Latin inscription: "Ieso Christo Deo et homini sospitatori" [to the honour] of Jesus Christ, God, and man, the Saviour". 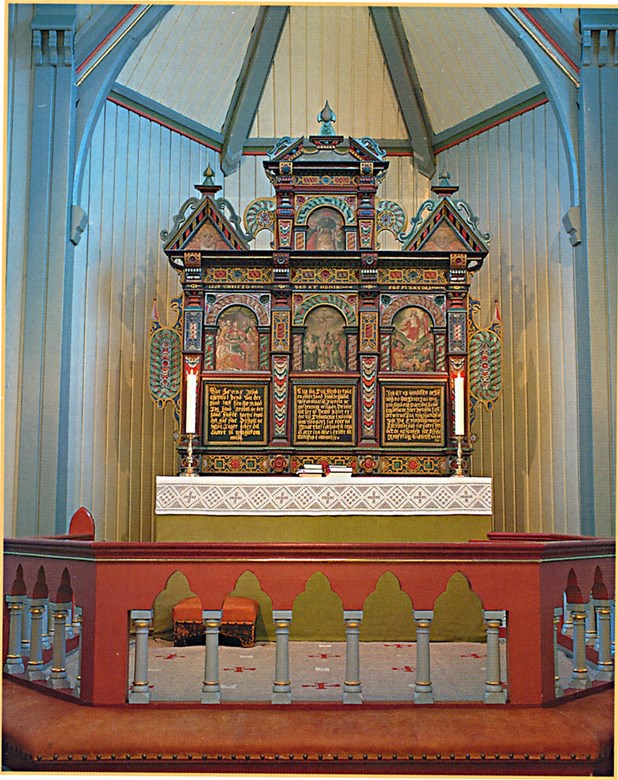 The architect Christie wanted a specially designed altarpiece by Anders Askevold, with a painting on all the three walls to avoid hiding the altar niche. In a letter dated 1 July, 1868, Askevold explained how he had imagined the altar picture, if he was given the commission: "In that case I intend to paint the Crucifixion, the same kind of composition and size as for the one I delivered this spring to the new Østensø church in Hardanger." Nothing came out of this plan, however, most likely for economic reasons. In its stead, a cross was used, designed by Christie and decorated with the face of the thorn-crowned Christ with the evangelist symbols by the painter Chr. Brun. This now hangs on the side wall in the chancel.

From the service in the Holmedal church in connection with the centenary / centennial in 1968. The bishop Per Juvkam officiated at the service. There were six clergymen present, and the church was filled to capacity.
Owner: Fylkesarkivet, SFFf-97042.0106. - Date: 1968. - Photographer: Johan Tveit.
Fylkesarkivet, SFFf-97042.0106.
1968.
Johan Tveit.

Holmedal is an ancient church site, which in former times was a centre for a relatively large area. It was not without reason that the present municipalities of Gaular and Fjaler previously were called Inner and Outer Holmedal. This was also the location of the main church in the old Holmedal parish, which once covered the length of the Dalsfjorden and further up the river of Gaula to the Gaularfjell mountains.
Owner: Fylkesarkivet, SFFf-96081.0009. - Date: 1909. - Photographer: Ukjend.
Fylkesarkivet, SFFf-96081.0009.
1909.
Ukjend.
resources:
Aaraas, Margrethe Henden m.fl.: På kyrkjeferd i Sogn og Fjordane - 1. Nordfjord og Sunnfjord. Selja Forlag. Førde 2000.