The road construction between Instefjord and Oppedal was an important link in the so-called Coastal Highway between Stavanger, Bergen and Ålesund, the E-39 crossing four counties. The road was opened in 1990 and gave a new ferry connection and a shorter crossing of the Sognefjord. In addition, the road connected the villages on the southern area of the Høyanger municipality to the main road network. To top it all, the 10-kilometre-long road received "The beautiful roads award" in 1992. 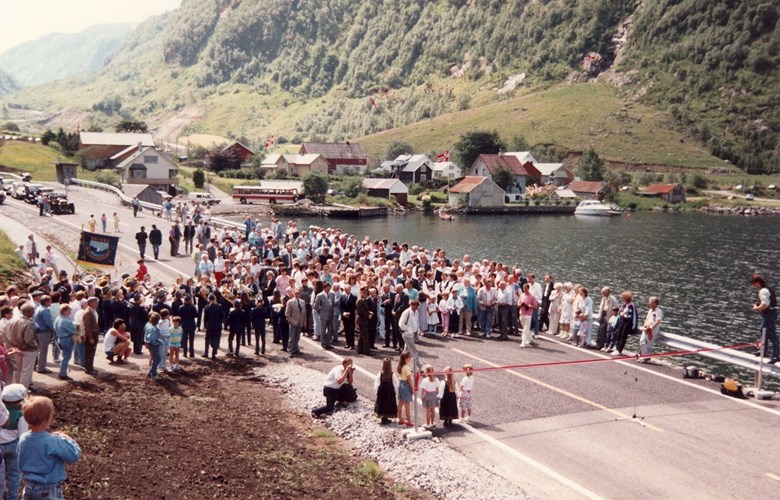 From the opening of the road Instefjord-Oppedal at Oppedal on 22 June 1990.

The road construction formed part of a faster and improved E-39, with a shorter ferry crossing and a higher road standard. The construction was financed in the ordinary main highway budget, and the first allocation came in 1986. According to the Norwegian Road Plan, the construction was to be completed in 1991, but because of an extra allocation of 13 million kroner in 1989, the opening of the road actually took place already in 1990. The total cost of the road project was 79 million kroner (1990 kroner). The road is 9630 metres long, with a road width of 7.5 metres. The Skrikeberg tunnel is 1.5 kilometres long, and the tunnel work was carried out between November 1988 and July 1989.

The Minister of Transport and Communication Lars Gunnar Lie opened the road for traffic on 22 June 1990. In his speech he said that the objective was to build a ferry-free coastal highway. The road gave a new ferry connection between Oppedal and Lavik with a 20-minute ferry crossing, compared to 35 minutes for the old connection between Brekke and Lavik. A shorter crossing means a higher frequency, and the capacity is increased considerably. From 1 April 1992, regular night crossings were introduced. 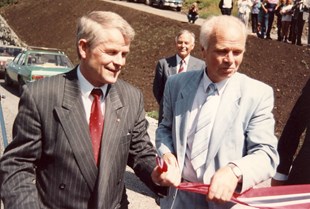 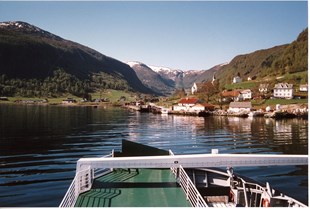 Road connection for the south side of the Sognefjord

Another important effect of the new road was that the villages along the southern side of the Sognefjord now got a continuous road connection from Sygnefest in Gulen to Ortnevik in Høyanger. This meant that the ferry service between Svartemyr and Nordeide came to an end, but was replaced by a new local boat service between Nordeide and Ortnevik.

This award was established by the Director General of Public Roads Eskild Jensen in 1988, and was meant to encourage better aesthetic qualities in Norwegian road and bridge constructions. In its recommendation the jury wrote that this road construction is a very good example of how it is possible to build a beautiful road in harmony with its surroundings. The road seems to form an integral part of the terrain, and the fills and the road cuts do not dominate the landscape. This is an accomplishment in itself in the steep fjord landscape. This road competed with 15 other road and bridge projects.

The fact that a quite ordinary road would get such an award was an important acknowledgement for the public roads administration in the county. The road was not built expensively at all, but it harmonizes well with the countryside. The whole road construction is characterized by solid and skilled, traditional craftsmanship, especially in the elegant rock walls. This was the first time that the county received this award.