Rugsund church is a wooden longchurch located on the farm of Hessevågen on the mainland side of Rugsund in the municipality of Bremanger. The church has a seating capacity of 400, and was consecrated on 2 September, 1838. It was built according to the standard designs made by the architect Hans Ditlev Franciscus Linstow. Rugsund church is a "sokn" church for the Rugsund "sokn" in the Davik parish. 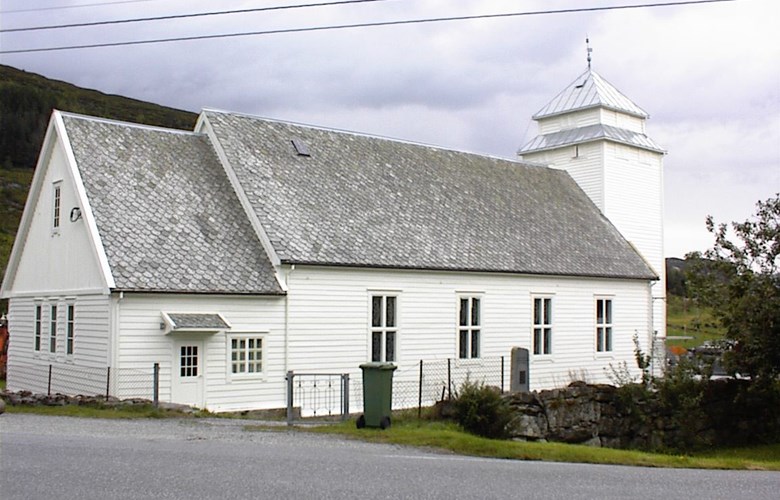 The architectural style of Rugsund church is very similar to the two-year-younger Utvik church. A standard design by the architect Hans D. F. Linstow formed the basis for both churches.

The church site at Hessevågen

The church in Rugsund has long traditions, but the church carrying this name today was erected at a different site than the earlier Rugsund churches. When the former church burned down, it had for a long time been a problem that the graveyard at Rugsundøy had such a shallow layer of soil. This was an important reason why a new graveyard and church site was moved to the mainland. As a matter of fact, the soil conditions were so bad at the earlier church site that funeral parties transported masses of soil by boat to the graveyard. But the beautiful location of the church on the point above the harbour was also a navigational landmark for ships.

When the present church was to be built, people demanded a similar fine location. At Rugsund the church was centrally located with the main entrance facing the sea, and with an excellent view from the church steps across the sound to the island. The churchyard encircles the church, and furthest down to the sea, there is a stately gate that the seafarers in earlier times walked through on their way to church. This was also the place where the vicar went ashore when he came by boat from Davik.

Owned by the shopkeeper at Rugsund

Rugsund church has a dignified appearance, especially when you view it from below the hill up towards the solid stone steps and the equally solid steeple rising high from the ridge. This is what the church looked like after the extension and the restoration in the years up to 1912. The original church building was financed by the prosperous shopkeeper Henrik Didrik Friis, often referred to as the "king of Rugsund" who also became the first mayor in the municipality of Davik.

The style and the building method are very similar to the two-year-younger Utvik church. Both these churches were based on a standard design made by architect Linstow. People knew that he was the royal architect himself, and many held the Rugsund church to be the finest in the whole region of Nordfjord. The local historian Jakob Aaaland, however, did not agree in all respects. He wrote that both the Rugsund and Ulvik churches were simple, sturdy, light, and spacious, but cold and far from pleasant.

Originally the church had a rather small steeple with a roof (hood) in the same form as the Utvik church still has today. At first there was no chancel addition, but the upper part of the nave was separated from the rest of the church room by balustrades, St Andrew's cross, and two solid columns on either side of the central aisle. At first the interior walls were unpainted, whereas the rest of the interior was painted white.

Extension of the church

It took only a few decades until the church proved to be too small. In 1877, the bishop pointed out that it ought to be extended, and in 1895, the diocese board of directors demanded that the church must be bigger. When the church owner Friis died in 1897, and his heirs accepted to sell the church, the real fight began. Should the church be moved to Totland, so a new church could be built at Rugsund, or should it be extended? They eventually resolved to extend the church.

In connection with the extension and the restoration work in 1911-1912, major changes were carried out. In addition to changing the steeple, a chancel was built, and above it a separate gallery for the organ.

This gallery has a slightly higher level in the church room than the gallery in the west end of the nave. The stairway to the organ gallery goes from the vicar's vestry on the north side. On the opposite side a baptismal vestry was built with entrance to the nave. The old chair sections where each family had reserved seats were replaced by pews. The church got new windows with stained-glass windows in the chancel, and 28 decorated panes in the windows along the walls in the nave itself. The stained-glass paintings are made by Jørgensen from Kristiania (Oslo). Individual persons, families, and various local organizations have contributed to the cost of these paintings, and all their names are painted on them. The interior was panelled, and the unique ornamentation and the elegant wood carvings were added under the guidance of the artist and wood carver Lars T. Kinsarvik.

Both galleries are decorated with traditional Norwegian rose painting, mixed with Christian motifs. The main colour scheme is various shades of blue, as well as green and yellow, all colours complementing each other well. The details are impressive, and even the organ which was bought in 1911 has carvings and ornamentation in keeping with the other ornaments in the church. The placing of the organ is not practical in terms of the contact the organist should have with the vicar. Above the chancel entrance, the following text is written: "O how amiable are thy dwellings: thou Lord of Hosts!" (from the Prayer Book 84:1), painted by the local artist Rasmus Bortne. 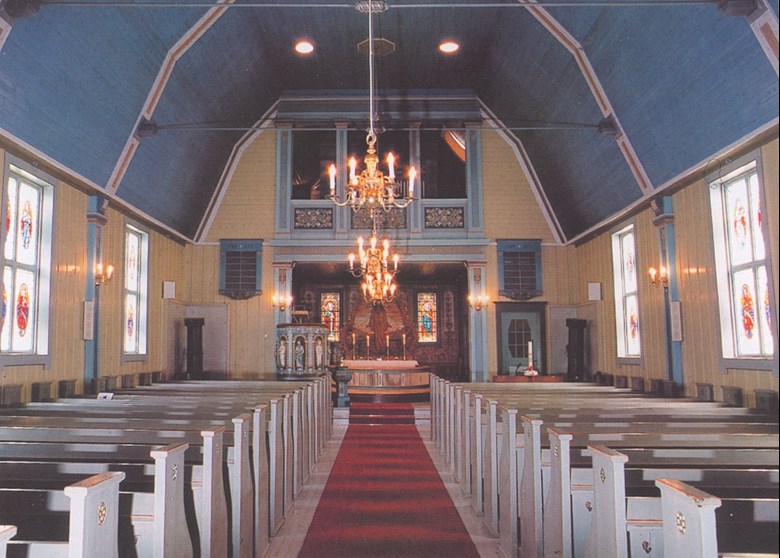 Kinsarvik also painted the pulpit and the font, and he carved the special altarpiece with the motif "Jesus walks on water". Bortne helped him with the rose painting. The dean Ingvald Eide and his wife Amalia must be given most of the credit for giving the commission to Kinsarvik, and that the interior of the church was decorated in such an elegant way. The dean and his wife gave two stained-glass paintings depicting Peter and Paul, in memory of their only daughter, Liv, who died at an early age. 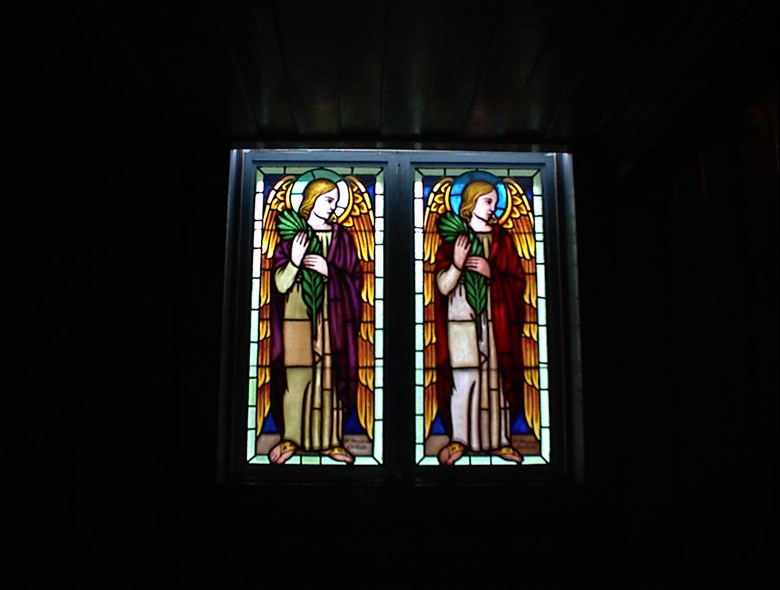 On the altar there are two brass candlesticks from 1912. The Holy Communion set consists of a chalice and a paten from 1712, and a pyx and a wine flagon in silver from 1912. The baptismal bowl has the inscription: "Suffer little children, and forbid them not, to come unto me" (Matthew 19;14). The holy water ewer from 1912 has the inscription "Rugsund church 1912". The seven-branched candelabra from 1988 is a gift from congregation members from Hennøysund. 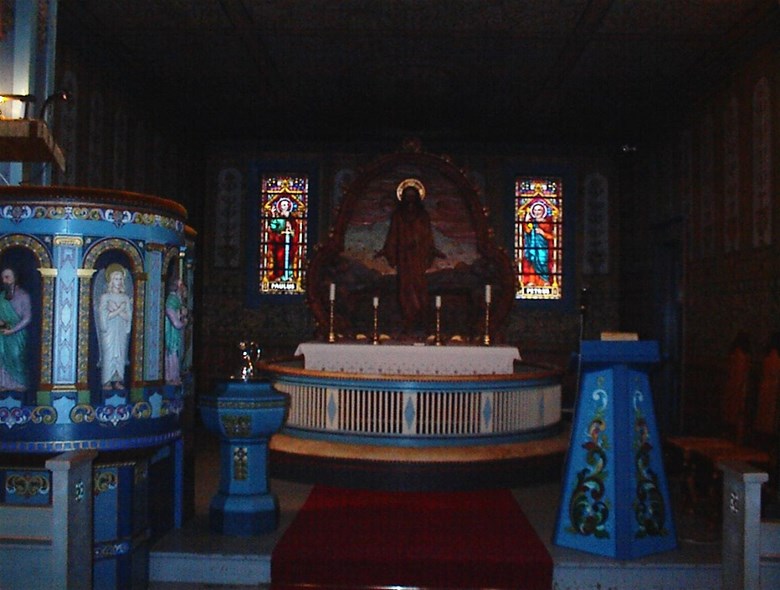 The 12-branched chandelier from 1719 has an inscription with a bible quotation and the names of the donors. An old altarpiece with a carved sun against a blue background, and a painting depicting the institution of the Holy Communion made by H. Reusch, are now placed in the lower gallery.

The organ dating from 1917 with 11 registers was made by "Olsen &Jørgensen". There are two church bells. One is from 1837 with the inscription: "Cast in Bergen by Wingaard & Bouilly, belonging to the newly erected Rugsund church in Nordfjord by Henrik D.E. Friis in 1837". The other bell dates from 1911 and is made by "O. Olsen & Søns Klokkestøberi Nauen" in Tønsberg, with the inscription: "Watch and pray and be ready. Soon I shall call you to peace".

The altarpiece dates from 1911 and is made by Lars T. Kinsarvik. The motif is 'Jesus walks on water'. The framework has rich decorations. On either side of the altarpiece there are stained-glass paintings depicting Peter and Paul, a memorial gift from dean Ingvald Eide and wife Amalia in 1911. The interior of the church is decorated with the special ornamentation and the beautiful wood carvings by the artist Lars T. Kinsarvik. He personally painted both the pulpit and the font.
Owner: Bremanger kyrkjekontor. - Date: 2003. - Photographer: Knut Arne Vadøy.
Bremanger kyrkjekontor.
2003.
Knut Arne Vadøy.