The road along the fjord between Naustdal and Eikefjord

The public road between Naustdal-Vevring-Stavang-Eikefjord was completed section by section, and not without discussions. The road between Stavang and Vevring was completed in 1968. Two years later, the road to Naustdal was opened for traffic. Still there were many isolated hamlets. Only in 1982 were the villages and hamlets along the Høydalsfjord linked to the road network. 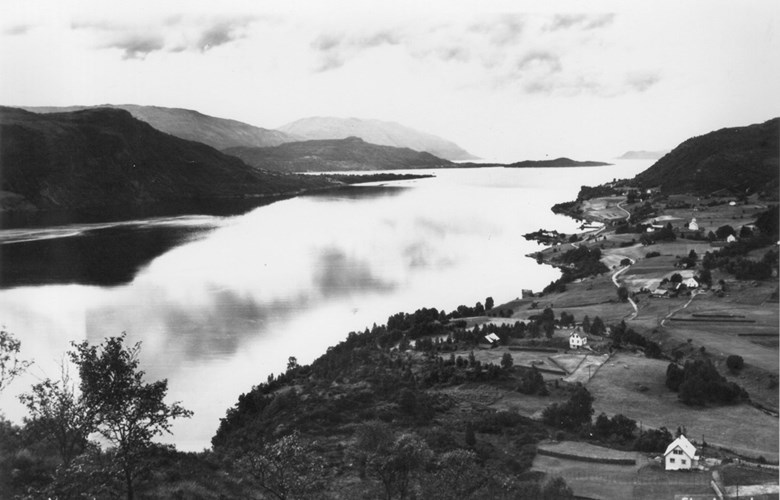 Highway RV 611 between Naustdal and Vevring was completed in 1970. This pictures shows Vevring long before the road was built.

In 1923, the railway plans for the county of Sogn og Fjordane were shelved, and as a compensation for the plans, the county was given means to build some roads that were planned to be built at a later stage. There was much disagreement as to which roads were to be given priority. The road between Førde and Florø was brought up in this discussion, whether to build it along the Førdefjord by way of Vevring or across Ramsdalsheia.

Knud Knudsen, district public roads chief administrator in the period 1924-1936, was known as a man with clear views on road issues. He stated that the two road lines between Førde and Florø, the Vevring alternative and the Ramsdal alternative, were equal as far as road construction was concerned, but he preferred the Vevring alternative because the road was shorter, and there would be less problems with snow, as well as being part of a so-called outer west Norway line. Nevertheless, he recommended building both lines. The Vevring line (also known as the fjord line) should be included in the compensation plan, whereas the Ramsdal line should be allocated means in the ordinary road budget.

The county council agreed to Knudsen's plan, but at the same time, they were afraid that it would make the compensation plan more expensive, as well as delaying other proposed road construction projects. In other words, it was a precondition that the Vevring line would not interfere with the other road projects in the compensation plan. The public road administration and the county road committee supported the Vevring line, and one of their arguments was that this line would provide road access to far more hamlets and villages. The Flora municipality was against the "detour" by way of Vevring. They maintained that it would take too long for the lorries transporting fresh fish southwards. The Vevring line was rejected, and it would take a long time until the road on the northern side of the Førdefjord was built.

At a meeting in the local council of Vevring about 1900, a representative stated that there would never be built any roads anywhere in Vevring. But times changed. In the 1930s, a road connection between the municipalities of Bru- Vevring and Naustdal was planned. In the late 1930s, the rural road between Vevring and Horne was started which would later be a part of the outer main road connection Gryta-Vevring-Stavang with ferry to Florø. In 1956, the road was completed between Naustdal and Helle.

In 1963, the municipalities of Kinn, Bru, Eikefjord and Florø united into one municipality - Flora. Neither Stavang nor the villages and hamlets along the Høydalsfjord, Ausevika and Høydal had any road connection to the municipal centre of Florø. In 1968, the county council executive board, in accordance with the recommendation from the district public roads head administrator, to build a road between Stavang and Lending. This would mean that a number of isolated hamlets and villages along the south side of the Høydalsfjord, as well as giving Stavang an overland road connection to Florø.

The Ministry of Transport recommended that the road project Stavang-Lending should be included in the programme for the municipal boundaries regulation, and the state would cover 50% of the cost. The cost of this road project amounted to close to 30 million kroner. The roadwork was started on 18 September 1972 from Lending. The total length of this road section was 14.8 kilometres and with a road width of 4.5 metres. In 1978, the roadwork was started from Stavang, and in 1982, the road was opened for traffic. Only then was it possible to drive the whole length of the Vevring line - from Naustdal to Eikefjord.

Included in the project was the 259-metre-long Osstrupen box girder bridge. This was built according to the segmental cantilever principle, a method that was very common in the 1970s and later. If the Osstrupen bridge had been built earlier, it would probably have been built as a suspension bridge. The segmental cantilever method had by now become more common because of lower steel prices. It had now also become possible to build stressed concrete construction bridges with longer spans. The bridge was completed on 15 February 1976 at a cost of 7.4 million kroner. An interesting detail is that the bridge was completed long before the rest of the road connection was opened. 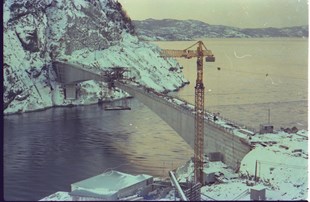