Innvik church is an octagonal wooden church situated in the village of Innvik in the municipality of Stryn. The church has a seating capacity of 350, and was consecrated on 28 July, 1824, by the bishop Jacob Neumann. The master builder was Elling Olsen Waldboe. Innvik church is a "sokn" church for the Innvik "sokn" in the parish of Innvik. 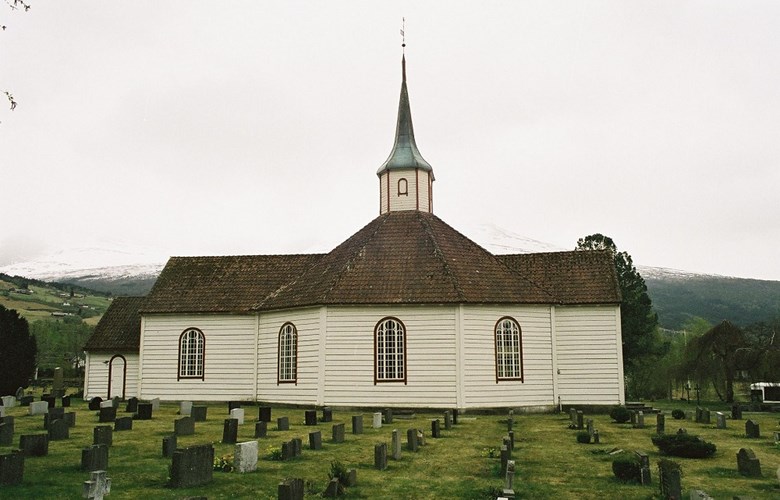 The octagonal church at Innvik has a unique style. Compared with the Loen church there can be no doubt whatsoever that this is a more elegant church building.

When the Innvik church was consecrated in 1824, it had already been in used for two years. The church was completed in 1822, and the first sermon was officiated on Christmas Day the same year. It is one of two octagonal churches in the municipality of Stryn, and is held to be more elegant and better built than its sister church in Loen. It is perhaps more correct to say that these two churches have their own distinctive styles. Nevertheless, the white-painted church at Innvik is without doubt elegant, and the many angles give it a gentle look.

The present interior is a result of the work carried out in connection with the 75th anniversary of the church in 1899. A vestry was then built behind the chancel, later divided in two in 1927. A new vaulted ceiling was built, and loose pews replaced the old built-in church chairs. At the same time the gallery was extended with a view to making room for an organ at some future time. The old windows and doors were replaced as well, and the church interior was repainted.

What mattered most to many people was the fact that new wood stoves were installed. After a long crossing of the fjord on many a cold winter day, the congregation now at least did not have to freeze while attending the service. In addition to the village of Innvik and the hamlets of Frøholm and Årholen, many hamlets and settlements on the northern side of the fjord also belonged to this ¿sokn", such as Blaksetbygda, Robjørgane, Sætren, Faleide, Svarstad and Sør-Markane (Sindre district). They crossed the fjord at all seasons, in the same way as their neighbours at Fjelli and Randabygda went to Utvik. 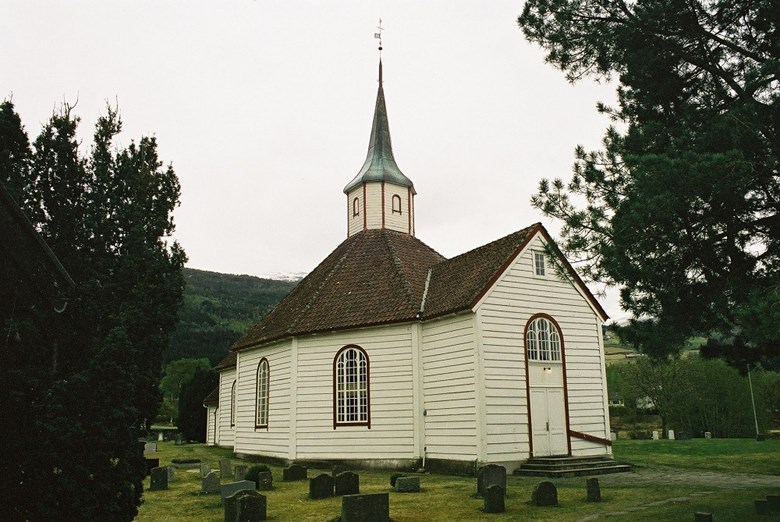 In 1914, in the same year that the church got its organ, electric lighting was installed. The wood stoves were also replaced by electric heating in 1961.

The church colours are very similar to the original scheme. The walls are painted yellow, and there is wainscoting in the nave. The pews are brown and built in the same style as the former pews in the Loen church. They were redecorated in 1994. Both the nave and the chancel have arched, small-paned windows which also provide lighting for the gallery. The nave ceiling is divided into white fields, separated by red-painted beams with golden ornamentation. The chancel ceiling is also divided into fields, but the ornamentation is simpler. In the chancel there is a special entrance door on the northern side which was formerly used by the vicars. Four solid columns stand in the central nave, whereas two similar columns mark the chancel partition. The gallery protrudes on the sides, and has a balustrade covered with panelling on the inside. 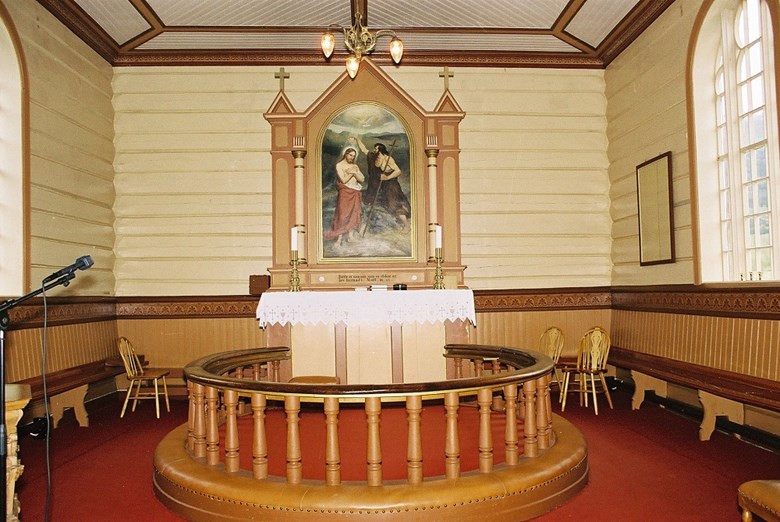 The octagonal steeple is said to be built of partly very old material from the previous church. Much of the interior objects come from the old church as well, such as the pulpit - a gift from ¿Master Jo" - who has the dubious distinction of having been one of the worst clergyman of all times in this country.

The congregation in Innvik has seen many changes in the ¿sokn" borders throughout the years. The ¿catchment area" was completely changed in 1967, when large areas on the northern side of the fjord were transferred to the Hornindal parish. From that year on, all church services on the northern side were carried out either at the Hornindal church or the Randaberg church. The only exception made was for elderly people who wanted to be buried in one of the churches on the southern side because their spouses were buried there. In 1977, Hornindal was separated from the municipality of Stryn and became a municipality in its own right. At the same time, the Nordsida chapel district, established in 1973 for the northern side of the "sokn" of Innvik and parts of Utvik ¿sokn", was reorganised to Nordsida ¿sokn".

The Holy Communion set consists of a chalice, a paten, a pyx, and a wine flagon of various dates. The font dates from 1923. The brass baptismal bowl dates from approx. 1600, whereas the holy water ewer is undated.

There are two painted, wooden sculptures from 1660, portraying the Virgin Mary and the Apostle John. These are placed on the columns facing the chancel. Originally they formed part of the so-called Gabelsen epitaph. The two carved, wooden shields date from the Middle Ages. The two church bells are undated.

The medieval stone cross stands by the main gate. It is made of soapstone and is formed as a sun wheel in Keltic style. The cross was found on the old church site at Hilde. Most likely it had formed part of the lid of a soapstone coffin.

From Innvik church comes one of the largest epitaphs in the country, with a height of more than five metres. It dates from 1647 and was made in memory of the vicar Peter Gabelsen. 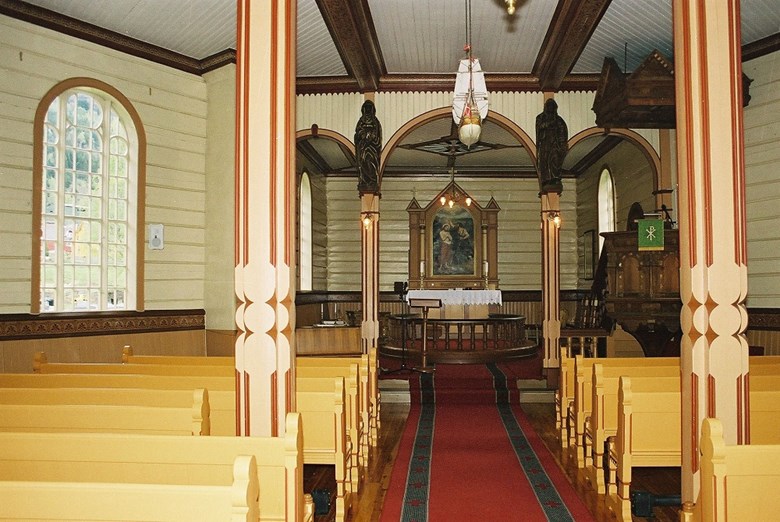 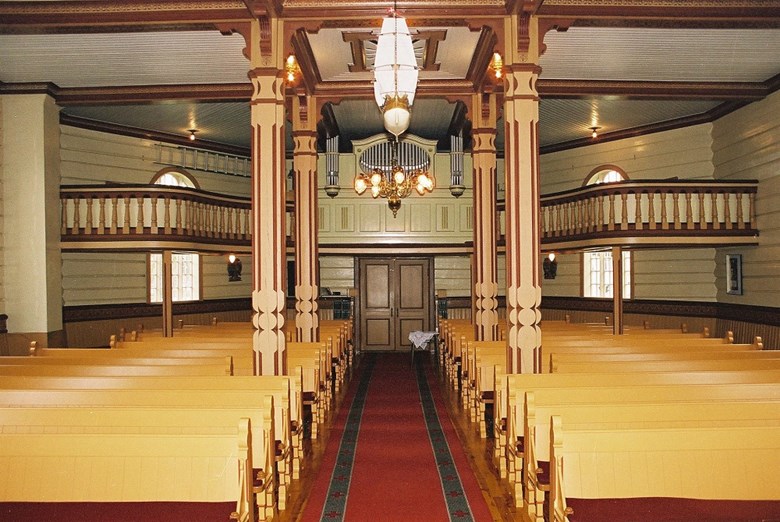 The pulpit in the Innvik church dates from 1617. It is made of oak and has a hexagonal form. The pulpit is a refined example of high Renaissance carpentry with carvings (cassette ornamentation). It was given by the vicar Jon Mogens Skanke - 'Master Jo'. Both the timing of the gift and the fact that the congregation accepted the gift is remarkable.
Owner: Fylkesarkivet i Sogn og Fjordane. - Date: 2001. - Photographer: Hermund Kleppa.
Fylkesarkivet i Sogn og Fjordane.
2001.
Hermund Kleppa.

From the interior of the church, from the nave towards the chancel. The nave and the chancel both have arched small-paned windows. The nave ceiling is divided into white sections, separated by red-painted beams with golden ornamentation. The chancel ceiling is also divided into sections, but the ornamentation is somewhat simpler.
Owner: Stryn fellesråd. - Date: 2003. - Photographer: Svein F. Rønne.
Stryn fellesråd.
2003.
Svein F. Rønne.

From the interior of the church seen towards the gallery and the porch. The colour scheme is fairly similar to the original colurs. The walls are painted yellow, and the nave has wainscoting. The brown-painted pews were last redecorated in 1994. There is a votive ship model hanging from the ceiling. The organ from 1914 has eight registers, and is built by 'Olsen & Jørgensen'.
Owner: Stryn fellesråd. - Date: 2003. - Photographer: Svein F. Rønne.
Stryn fellesråd.
2003.
Svein F. Rønne.
resources:
Aaraas, Margrethe Henden m.fl.: På kyrkjeferd i Sogn og Fjordane - 1. Nordfjord og Sunnfjord. Selja Forlag. Førde 2000.