The hamlet of Frønningen is located between Revsnes and the entrance to the Aurlandsfjord in the municipality of Lærdal. The hamlet borders to Kaupanger and Fresvik along the main Sognefjord and to the public land areas of Lærdal and Aurland. East-southeast of the hamlet is the majestic mountain of Bleia rising to an altitude of some 1700 metres. The Bleia nature reserve and the forest from the inner Frønningen settlement up towards Bleia is part of the world heritage area called West Norwegian fjord landscape. 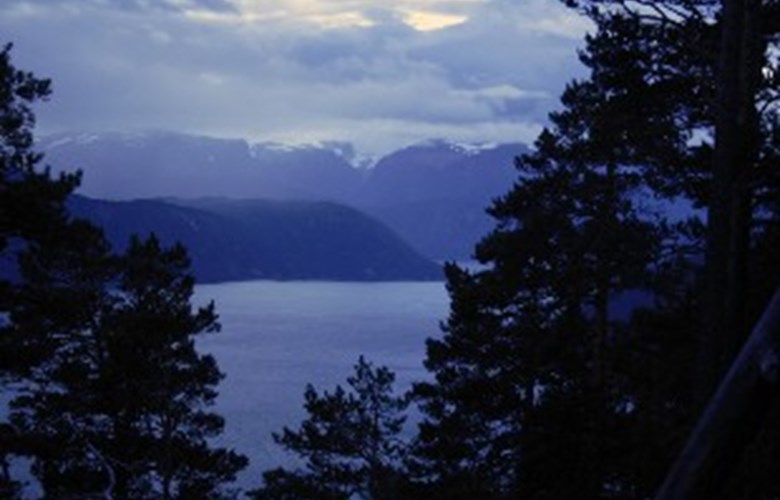 The hamlet of Frønningen is located between Revsnes and the entrance to the Aurlandsfjord. This is a picture of the hamlet seen from Amla on the northern side of the Sognefjord.

The etymological explanation of the name is uncertain, but one interpretation is "well manured, rich or fertile soil". Some people think that this is not a suitable description of the actual conditions. Another interpretation is that the name has to do with "fråde" (foam, froth), derived from the waterfall at Frønningen which may have been called Frønningr.

Only a few archaeological finds testify to any human activities in the area before the Middle Ages. One of these finds is a fine stone axe with a drilled hole for the handle, a so-called handle-hole axe. This type of axe dates back to the period when cultivation was introduced to the hamlet towards the end of the Stone Age or early Bronze Age. The other two finds - and axe and a spear - probably bear witness of activities in the late Iron Age, that is, the period from 600-1050AD. Finds like these are normally linked to graves, but there are no visible signs of any such graves in the landscape.

Whereas some of the farms in the village are located down along the fjord, most of the farms are located on a 400-500-metre-high plateau, called Flata or Åsen, for a while also called "Lagmannsås". The oldest settlement in the village is found there, whereas the farms along the fjord are of a more recent date. According to written sources, there was settlement on three farms in the Middle Ages - Lagmannsås, Lagmannsvik (Buene) and Indre Frønningen. Buene was originally the location of the boathouses belonging to Lagmannsås. The origin of this farm name is probably that the farm was owned by a judge or law speaker, appointed by king Sverre as the legend has it. The same sources also reveal that as early as in the 13th and 14th centuries, Frønningen was part of a larger estate, the noble estate of the Kvål family in Sogn. In the 14th century the estate was taken over by the Crown. We assume that some of the farms were deserted after the Black Death in 1349-50.

For a long period of time the Lem family had large properties at Frønningen. Hans Pedersøn Lem had most likely inherited the property from his mother, the famous Inger from Austråt. After his death the property was sold, among others to some Bergen citizens who operated sawmills in the area. After Nils Pederson Lem bought the property as part of a bigger land estate in Sogn, the area of Lagmannsås became an allodial estate for the Lem family from the 1620s. The Lem family owned the Frønningen estate until 1869. When Jan Clausson Rumohr from the Rikheim farm in Lærdal was married into the Lem family, he took over the estate when the last member of the Lem family died without any heirs. The estate still belongs to the Rumohr family, with Vilhelm Rumohr as its present owner.

The forest and the sawmills

We do know that people cultivated the land at Frønningen before the Black Death. However, the find of an axe from the Iron Age may indicate that the forest has played an important part through the ages. Written records confirm forestry and sawmill activities at Frønningen, first in connection with Dutch shipping activities, shipbuilding and mining, as well as with the growth and development of cities in the 16th and 17th centuries. A number of sawmills were built in the area, as many as six gate saws at the same time. Only one of these - Gamle Sagi (the old sawmill) - remains today. The big timber chute (slide) down the steep mountainside from the plateau of Flata down to the fjord is no longer intact, but sections of it are still visible. The operation became much more effective when the sawmills were built close to the huge forest areas. This intensive operation meant that there is not much saw timber left. However, the forest grows quickly at Frønningen so in a few years saw timber can be cut again.

Whereas the Lem and Rumohr families employed a governess or their own private teacher for their children, the other children in the village went to school every other day. The first school building was located at Kvedhushaugen, close to Nyborg. In 1961-62 a new schoolhouse was built close to the holding Stølen at Flata. Most children had a long and strenuous walk to school, especially for those who lived at Buene who had an hour-long uphill hike to get to school. Others, such as those who lived at Indre Frønningen and Vetlefrønningen came by boat but had to stay away from home, for example at Stølen.

In 1858 the local steamship company Fylkesbaatane established its first regular boat service in Sogn. Under pressure from the estate owner, the local steamer stopped at Frønningen on signal. In this way goods and commodities were traded, and post and telegrams could be exchanged. Up until 1965 the post and telegraph services took place in the main residence with the estate owner as a shipping agent and post office administrator. After 1965 the office was moved down to the quay.

Frønningen played a vital role during the last few weeks of the Second World War when the resistance group "Siskin" stayed there with its weapons arsenal. After the war, the number of residents has been steadily going down to about 15 permanent residents in 2007. The Frønningen hamlet association established in 1991 has made a great effort to preserve Frønningen as a living rural community, in spite of the low number of people. From 1998 the Frønningen Tourist Service ran a restaurant and a general store down by the fjord, but this has now closed down.

At present Frønningen is the

largest forest property in western Norway, covering a total area of 65 square kilometres (some 25 square miles). 50 square kilometres consist of forest. At Frønningen it is possible to visit the main residence, the gate saw, and the farm museum consisting of old buildings from Sogn, collected by the artist Knut Rumohr. On the summer ferry service between Kaupanger and Gudvangen it is possible to make a request stop at Frønningen, but make sure to make an agreement with the ferry crew to be picked up on the return voyage!