Undredal church is a stave church from the mid-12th century. The church, with a seating capacity of only 40, has since the early 18th century been clad with horizontal panelling. It is said to be the smallest church in the Nordic countries. Undredal church is a "sokn" church for the Undredal "sokn" which has a congregation of 116 members. This is the smallest church but one in the county and even in the diocese.

Tourist brochures call this gem of a stave church in Undredal the smallest church in the Nordic countries, which is perfectly true. It measures only 12 by 4 metres with a seating capacity of 40, but it is still in regular use as a 'sokn' church.

Built in the mid-12th century

The church site in Undredal is a small terrace on the north side of the village with a commanding view of the fjord. The oldest farm in the village was situated close by. This site is least exposed to avalanches and also the sunniest spot. Nevertheless, there is very little space, and the added chancel to the east rests on a high wall outside the terrace. Towards the west a farm road winds its way up to the porch door.

The Undredal stave church has an approximately 850-year-old history, containing many mysteries. It is one of the oldest churches in Norway, but without any exact dating. Admittedly, a date has been carved into one of the rafters which may be interpreted as 1147. Most likely this is meant to be 1447, and this dating may refer to the repair of the roof. Still, 1147 may not be too far from the truth, as style assessments and dendrochronological studies indicate that it was built in the mid-12th century.

The building history of the Undredal stave church is like a mystery with no solution in sight. Traces in the walls may indicate that the material has been reused or even that the whole church has been moved, but there are no definite proofs. What can be said is that the church is a simple, single-nave church which measures a mere 11.8 metres in length including the nave and the chancel, and a width of four metres. The stave-built, oldest part forms the eastern part of the nave, with four staves in a square. Most of the stave construction remains intact, corner staves, sills, wall planks, and rafters.

The church probably had an external gallery around the south, west, and north walls, but not around the oldest chancel to the east. There was no porch, but the entrance was from the external gallery. The oldest chancel was square, measuring about 2.3 metres on all sides. Traces of the chancel can be seen in the upper part of the east wall in the nave. Later on, the church was extended both to the east and to the west. The oldest stave-constructed chancel was replaced by a larger, timber-built chancel, probably in the late 16th century or early 17th century. At the same time, what was originally a free-standing belfry was rebuilt into a steeple on the western side of the church. The room under the steeple was first used as a porch, but later it was opened up into the nave to make more space there. Then a porch to the west was added. 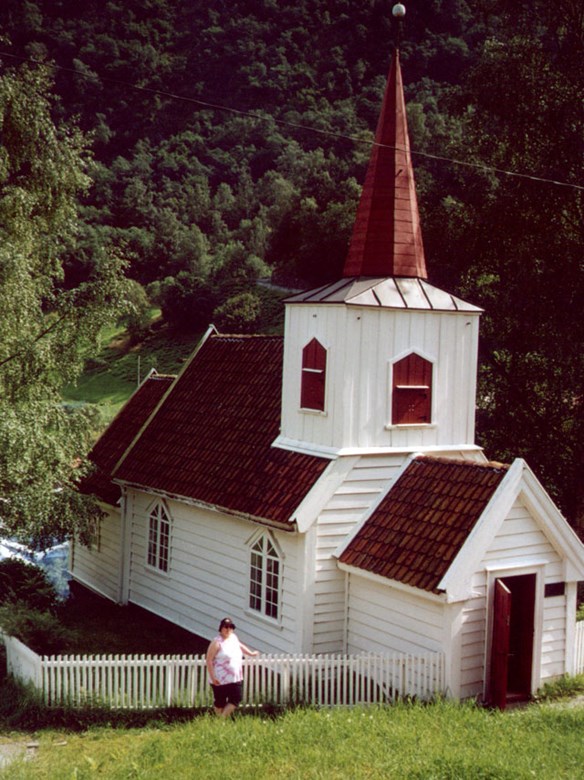 The interior of the church was originally open up to the gable, but an arch-like vault was built probably some time in the 17th century. At the same time, the walls and ceiling were painted with colourful decorations. The walls were painted with drapery, acanthus ornamentation, flowers and apples, whereas the ceiling was decorated with stars and angels on a blue background. Supposedly, there are some 800 stars in the ceiling of this tiny church. The ceiling boards are numbered, which may indicate that the boards were taken down to be decorated and replaced afterwards. On the walls there are many disconnected decorations and wall boards, in addition to a number of other traces of rebuilding activities. Six of the original 12 consecration crosses (circles enclosing a cross-shaped geometric pattern) are visible, four on the corner posts (staves), and two on the side walls. When the church was consecrated, there was a special ceremony where the bishop anointed 12 crosses which symbolized 12 foundation stones in the city wall of Jerusalem. This ceremony took place in all churches in Catholic times.

In 1862, the gallery was removed, as was the wall between the nave and the chancel. New pews were also installed. The whole interior was painted white, thus covering the old decorations. This is what the church looked like until 1962, when the curator Ola Seter removed the white paint and the old fanciful ornamentations once more reappeared. These decorations are a highly distinctive feature of the Undredal stave church.

Later on the church has undergone maintenance at various times. A new roof was put in place in 1964-65, but had to be repaired already in 1972. In 1984, new panelling was put on the church steeple, a new floor was laid in the porch, and the whole church was wrapped in plastic and gassed to exterminate the house borer. New coats of paint were put on the exterior. In 1989-90, a vestry was built, partly dug into the slope to the north. 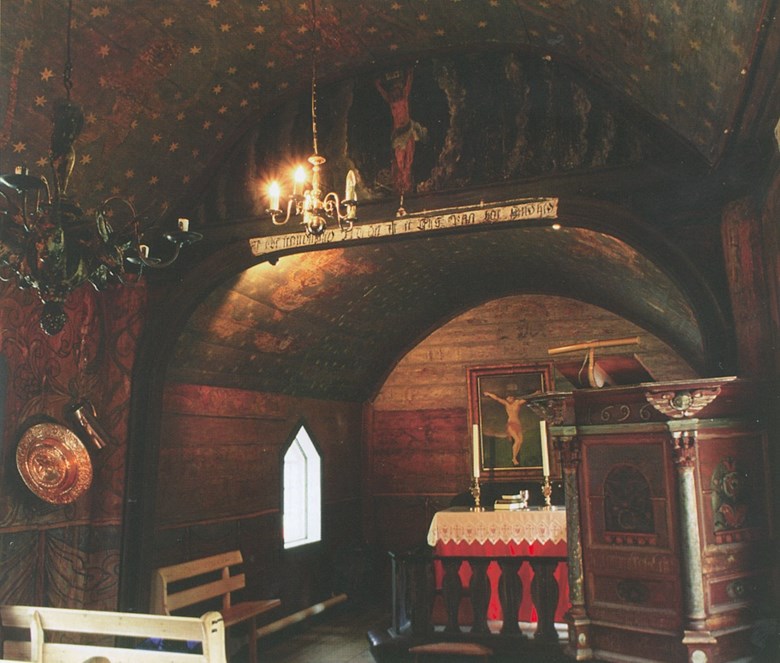 The altarpiece dates from about 1900 and is made by the vicar Ole Ohnstad (1861-1943), who actually hailed from Undredal. The painting portrays Jesus on the cross.
The pulpit is a Renaissance work of art from the 17th century. The date 1696 is carved in wood and glued on, in addition to the names of the persons who financed it.

The font is an iron ring on the front bench in which the baptismal bowl from 1680 was placed. The bowl is made of a copper alloy. The centre of the bowl has an animal in relief which may resemble the Norwegian Lion, the national symbol. The holy water ewer made of copper alloy is undated.

The chandelier most likely dates from the Middle Ages and is made of painted wood, horn, and brass. The central element is five carved animal heads (deer) with genuine antlers. From each neck there is a candle holder made of brass. At the top there is a naked body of a woman, and underneath, something resembling a cluster of grapes. This strange chandelier has no parallel elsewhere in Norway, but is said to be found in a monastery in the south of Germany.

The purchase of the 200-pipe made by G. Klop, took place in 1991 by means of the money the "sokn" council received by Sogn Folkemuseum for the "sale" of the church. There are two brass altar candlesticks dating from 1702, a silver Holy Communion set of chalice and paten, a bridal chair and a kneeler from the 17th century.

Undredal stave church is consecrated to Saint Nicholas (died AD 350), and was probably built as a private church for a rich man, perhaps of the Aurland clan. This is evident by the name chapel which was frequently used about private churches, and we know for a fact that the bishop in Bergen and even the Pope in Avignon in the 14th century controlled the Undredal church, which is an indication that this was no ordinary 'sokn' church.
Owner: Fylkesarkivet i Sogn og Fjordane. - Date: 2002. - Photographer: Ukjend.
Fylkesarkivet i Sogn og Fjordane.
2002.
Ukjend.

In 1913, Gert F. Heiberg bought the stave church in Undredal for 1250 kroner in order to move it to the Heiberg Collections in Amla. Nothing came out of the deal, because one condition for the deal was that the church should not be moved until money was raised to build a new church. In 1982, the matter came to a formal conclusion, and after 69 years in the bank, the sum had grown from 1250 to 12 000 kroner which the 'sokn' council used to buy a new organ.
Owner: Aurland.com. - Date: 2002. - Photographer: Ukjend.
Aurland.com.
2002.
Ukjend.
resources:
Aaraas, Margrethe Henden m.fl.: På kyrkjeferd i Sogn og Fjordane - 2. Sogn. Selja Forlag. Førde 2000.
Djupedal, Torkjell: Undredal - kyrkja og bygda. Selja Forlag. Førde, 1997.