The Viking Farm at Ytre Moa

The Viking farm at Ytre Moa is the most comprehensive farm complex we know in Norway from the Viking Age (800 – 1050 AD). The farm dates from the 9th century when much land was cleared for cultivation. For some unknown reason the farm was deserted, most likely towards the end of the 10th century. In the excavations from 1964 to 1966 six house sites and about 20 burial mounds were found.

Ytre Moa is a gravel and sand terrace located about 100 metres above sea level at the foot of the steep mountainside of Moakamben at Øvre Årdal. The blue smoke is emissions from the aluminium plant below.

Ytre Moa is located on a gravel and sand terrace about 100 metres above sea level, at the foot of the extremely steep southwest mountainside of Moakamben at Øvre Årdal. The flat terrace slopes steeply down to the river Utla to the west and the river Tya to the east. The terrace once covered an area of between eight and nine hectares (about 17 acres), but throughout the years the rivers have cut deeply into the terrace base and thereby reduced the area. The farmyard is located on the eastern part of the terrace which has the best soil.

The excavations took place in the years between 1964 and 1966, led by the later professor Egil Bakka. The initiative was taken by the headmaster Søren Ve and the local historical society of Årdal, supported financially by the municipality of Årdal and the aluminium metal plant "A/S Årdal and Sunndal Verk". It was the then office manager of the company who first became aware of the prehistoric importance of the area. He also saw to it that the area was not destroyed by the company gravel pit. Within an area of one hectare six house sites and about 20 burial mounds were uncovered. All the house sites and eight of the burial mounds were excavated. 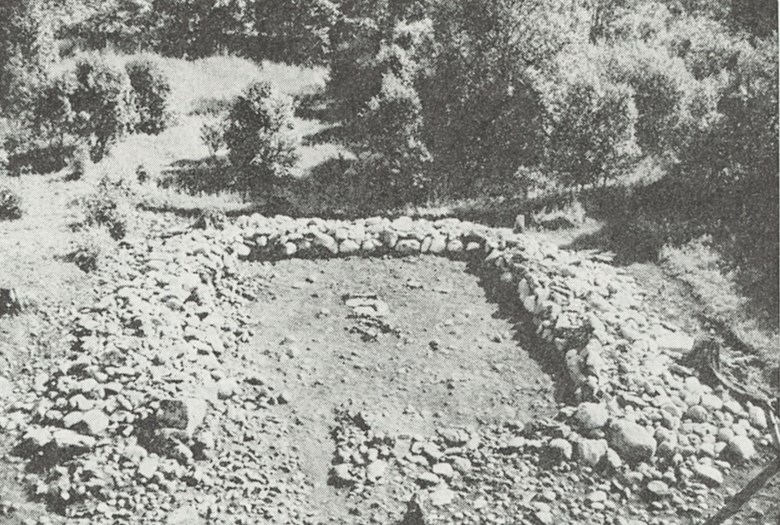 The six houses at Ytre Moa were small. Three of them were used as dwellings. We do not know for sure what the remaining three houses were used for. There is little variation in the house sizes, with floor areas ranging between 30 and 45 square metres. The house type was probably a simple stave construction. The main principle of this building technique consisted of upright posts or columns which in turn carried the roof. At the top the vertical posts were kept together by horizontal overlying tie beams. Two upright posts and a tie beam across constituted one frame in the grindverk (anchor-beam construction). On top of these frames there were strong purlins placed lengthwise. These purlins kept the grind frames together at the same time as they carried the load of the rafters. Grind frames and purlins constituted what was called a stavbinding (arcade plate).

The roof probably had rafters resting on the arcade plate and 0n the walls. On top of the rafters there was most likely sarking (roof boards), covered by birch-bark and turf. The floor was undoubtedly an earth floor. In the inner part of the room in the dwellings there was an open fireplace, serving the double function of giving light and heat, and also used for cooking. A cooking pit (søyde) in the floor was also used for making food. The smoke from the fireplaces drifted freely in the room, eventually escaping through a smoke vent in the ceiling called ljore. The ljore was the only source of lighting in the house in addition to the doorway as there were no windows. 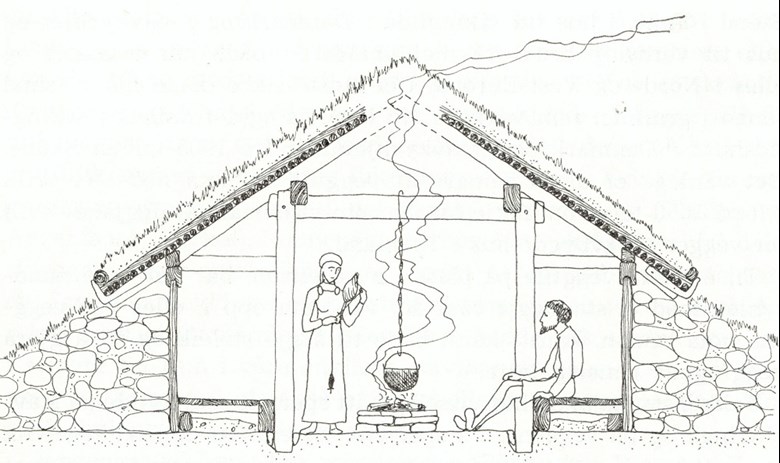 The most important farm implements of the farmer in the Viking Age were ridging plough (ard), hoe, sickle, scythe and lopping knife (snidel). In the material found at Ytre Moa all these farm implements are represented with the exception of lopping knife. Knives and whetstones were also found. The find of a hand millstone indicates that grain was ground. With the mill from the Oseberg find the millstone from Ytre Moa is an important "document" in the story of the hand mill in this country.

The farm animals provided the Viking farmer and his household with most of what they needed in terms of food and clothes: meat, flour, wool, hides, horn and bones. At Ytre Moa remnants of burned bones have been found, for example from pigs, sheep and goat, cow and horse. Finds of bridles, horseshoe and hoof spikes reveal that horses have been used as draught animals, and probably as pack animals and for riding. The many sites of mountain - farm houses that archaeologists have uncovered in the high mountain area of Årdal in the past few years give reason to believe that the farmer at Ytre Moa has used the mountain pastures in the summer months. In all the three dwellings several types of iron arrowheads have been found.

Finds of whorls and loom weights reveal that there were activities such as spinning wool and weaving frieze (a coarse woollen cloth). Tools used for building work and woodwork were also found. Slag from smithies indicates that there had been people competent at this kind of work. In a number of house sites and in some of the burial mounds bronze jewellery was found, such as a small fragment of a nicely decorated trefoil brooch and a gilded bronze pendant in the gripping beast style. A cloak pin and a number of glass beads were also uncovered. These pieces of jewellery prove that people used these luxury items traded from abroad, but they may even have been made locally.

Only a few of the eight burial mounds excavated revealed any finds. The biggest mound was number 16 which turned out to be a fire grave without any significant finds. A possible reason could be that the mound had once been plundered. At the edge of the terrace excavations were carried out on an area paved with stones and shaped like a boat. On this site archaeologists found boat seam, celt (a type of axe), fire steel, some beads, burned bones and coal. This could have been a woman's grave. 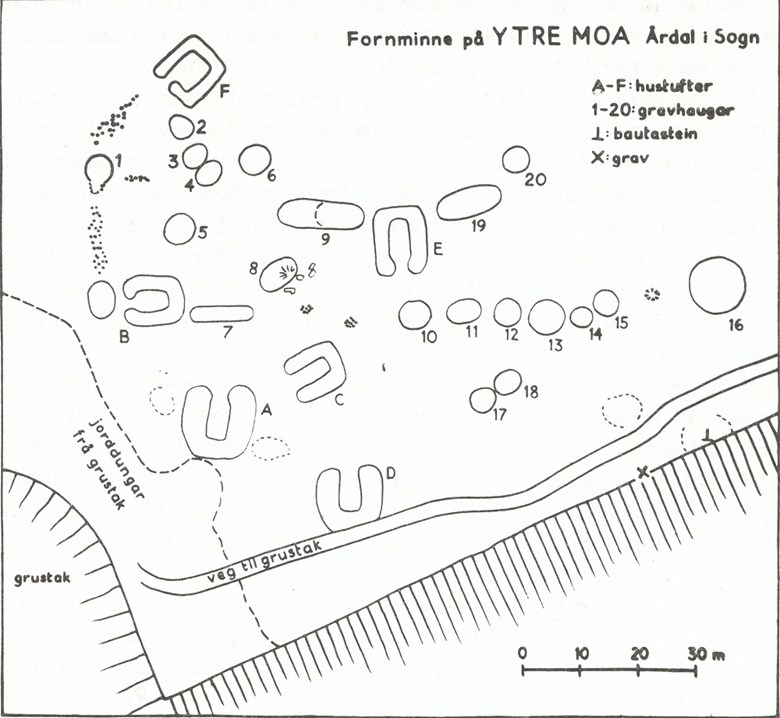 The earliest finds at Ytre Moa are a fragment of bucket-shaped ceramic, a firestone, and a whetstone made of quartzite. These finds date from the Migration Period, which means that they are three to four centuries older than the house sites. The houses can be dated to the 9th and 10th centuries. It is not clear whether there were one or two farms at Ytre Moa at the same time. At least two of the houses have burned down. Proof has not been established whether there was any farming at this site after the Viking Age.

The farm complex at Ytre Moa seems to have been deserted some time in the 10th century, in spite of the fact that the terrace is centrally located in the village, and there were eight hectares of level ground. In the opinion of Egil Bakka, the farm was deserted because the water source disappeared for some unknown reason. We know that the terrace covered a larger area than it does at present, and that the river Tya has eroded the base of the gravel and sand deposits. The Ytre Moa terrace may have been connected to the Moa terrace in the Viking Age. Landslides towards the valley of Leirdalen may thus have led to people deserting Ytre Moa.
In connection with archaeological excavations at Ytre Moa in 1990, traces of other sites were uncovered to the west of the already known farm. For this reason, more information on the settlement of Ytre Moa may be revealed in the future. In 2002, the Archaeological Museum in Stavanger was given permission to carry out further excavations. 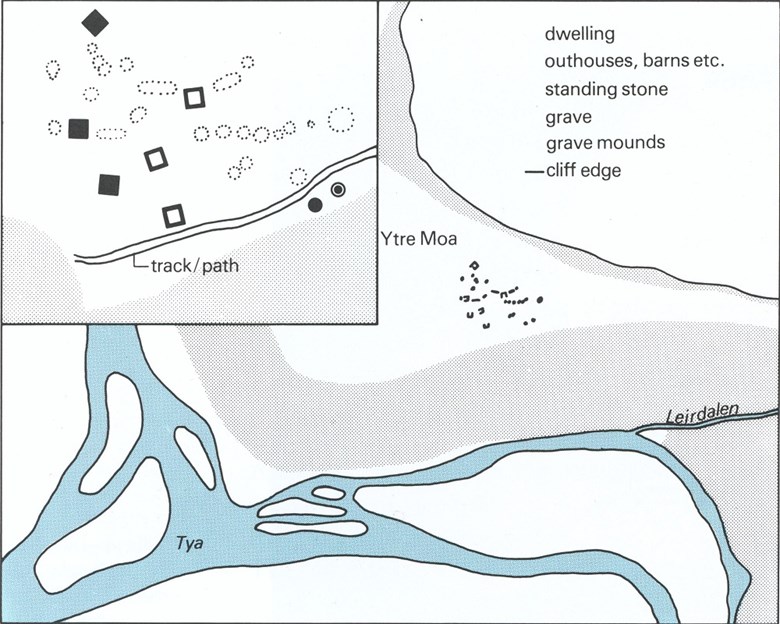