Vilnes church is a longchurch built of logs located at Vilnes on the southern tip of the island of Atløy in the municipality of Askvoll. The church was built in 1674 and has a seating capacity of 130. The vicar Otthe Jonassøn was in charge of the building project. In the 1950s, the church was restored according to the plans of the architects Johan and Claus Lindstrøm. Vilnes church is a "sokn" church for the Vilnes "sokn" in the parish of Askvoll. 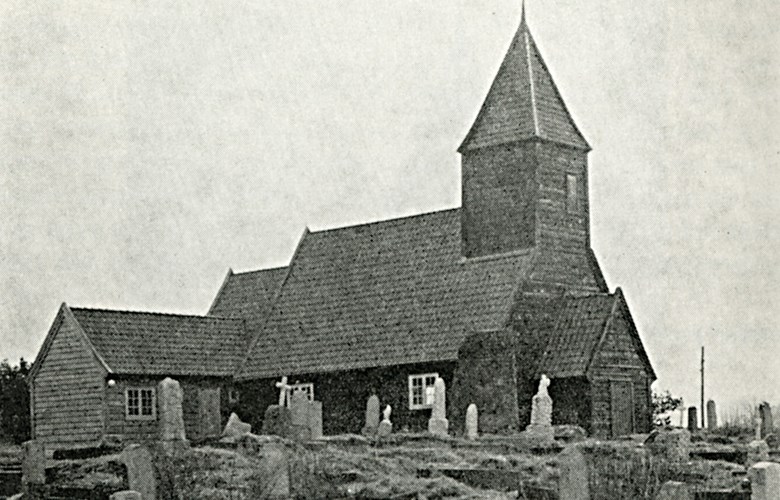 Vilnes church is located in a beautiful setting of memorial stones, tombstones, and a spectacular coastal landscape. Many legends are linked to the memorial stones and the stone cross in the churchyard.

On a hill in the south-western part of the island of Atløy, facing the ocean, Vilnes church is surrounded by tombstones. This church site is surely ancient, but it is hard to give the exact age. Based on the terrain, it is likely that the hill where the church stands used to be the ancient site of worship at Vilnes. There is a stone cross on the churchyard reminiscent of the so-called Olav's cross on the island of Svanøy. This cross marks a link to the past, perhaps even back to the times of the first Christian kings and the Christian sites of worship prior to the building of churches.

The vicar was in charge of the construction

Vilnes church is a beautiful, classic log-church from the 17th century, but when it was new it was hardly as attractive as it is at present. The construction of the church after the fire in 1673 is said to have been carried out in a hurry, under the guidance of the vicar Otthe Jonassøn who assumed the responsibility of leading the construction work. However, the man seemed to lack the necessary practical knowledge, in addition to running into financial difficulties.

The church was far from finished when it was consecrated, and the vicar was not able to get the church in proper order for as long as he lived. According to an inspection report from 1686, it was a later curate / chaplain, Hans Falch, who, at his own expense, paid for the new roof on the south side of the chancel when it was destroyed.

Throughout the years the church was cold and draughty / drafty. In 1817, the vicar Heiberg wrote in the church register that when he was at Vilnes on the first Sunday after Easter, he had to call off the service because of the low attendance and the fact that the church was full of drift snow. On the altar there were at least three inches of snow.

Nevertheless, people came to the church from the surrounding islands, from Folkestad on the south side of the Vilnesfjord, as well as from several places in Solund. This situation remained unchanged for another 100 years, despite the dissatisfaction with the building standard of the church. In the period between the two world wars, the issue of building a new church was raised many times. It was probably Rasmus Håskoll, the vicar in Askvoll 1939-1949, who prevented these plans. The vicar quickly made it clear when he came to Askvoll in 1939 that he was against the demolition of the old church and the building of a new one. He wanted instead to preserve the old, traditional building. After World War II, the planning of a comprehensive restoration work was started. The architect Johan Lindstrøm made the plans, but he died before the work was completed. It was his son, Claus Lindstrøm, who completed the restoration work.

The restoration work in the 1950s

The restoration was carried out during the 1950s. The church got a new roof, and a major insulation job was carried out in the ceiling, walls and floor. On the northern side of the chancel a new addition was built containing a baptismal vestry, a vicar's vestry, and a small organ room. The organ room was used for a while, but neither the organist nor the congregation were satisfied with this solution. The music could not be heard properly all over the church. As a result, the organ was placed on the south side of the chancel. A new altar, altar rail, and chairs were also built, and above all, electrical lighting and heating were installed.

In private ownership until 1903

The old style of the Vilnes church has been well maintained. Both in architectural and decorative terms the church is indeed a cultural gem. Most of the interior has a wooden colour, with the exception of the old interior objects and the built-in pews that are painted in red and the doors in green. On the right-hand side of the nave is the so-called Korssund chair, the very master chair in the church. It dates from the 1730s, when the churches of Vilnes and Askvoll, along with the Bue chapel were sold to the innkeeper at Korssund. All the innkeepers had their own chairs at the front of the church, which marked their rank above the rest of the congregation. In the period between 1815 and 1903, the church was owned by the owners of the fishing station at Bulandet, who then had the exclusive privilege of occupying the master chair. In January, 1903, the church was bought back by the "sokn" at a price of 5 760 kroner.

At the upper end of the northern nave wall is the so-called Vilnes chair which was used by the farmer at Vilnes. The partition between the nave and the chancel is marked by a solid wall where the central part is trelliswork. The arch itself up to the veiling vault is open. The chancel and the vaulted ceiling also have a wooden colour.

The altarpiece from 1977 is a copy of the old altar front. The original from about 1250 is now kept at the University Museum of Antiquities in Oslo, and it differs from other altar fronts by being both carved in wood and painted. Carved altar fronts of wood are extremely rare. The model has probably been the so-called Roman gilded altar where the figures were formed in relief of hammered copper.

For a while there was some uncertainty as to the whereabouts of the altar front. The vicar Håskoll was finally able to retrace it to the University Museum of Antiquities in Olso. It was not put on exhibit there until 1945. In the same year the issue of making a copy was brought up. Håskoll was of the opinion that if the Vilnes church were to receive a copy of the "antemensal", it should not be placed on the altar as was previously the case, but rather constitute the front of the altar. On the altar there could either be a large crucifix or a painted altarpiece.

This copy was not made until Ingebjørn Rossavik, vicar in Askvoll 1972-1978, took another initiative. A copy in wooden colour, carved by Oddvin Parr from Hellesylt, was put in its rightful place on 20 August, 1977. The University of Oslo was willing to paint the copy like the original, but this has not yet been done.

The altar front depicts Christ and the 12 Apostles. In the mid-section Christ sits on a throne with the world as a footstool, placed in a mandorla (a pointed oval used as an aureole). In each corner we find the common evangelist symbols: the eagle (John), man with wings (Matthew), the ox with wings (Luke), and the lion with wings (Mark). Ever since the Primitive Church these symbols have been linked to what is written about the four beasts in Revelation 4; 6-8. The only two Apostles to be identified are Peter with a key in the upper left section, and Paul with a sword in the upper right section.

From the interior of the church facing the chancel with the altar and the altarpiece. The altarpiece from 1950 is made by Kåre Martinsen. It was placed on the altar from 1950 to 1977, but now hangs on a side wall in the chancel. The pew doors are painted in red and green. On the right-hand side of the chancel is the so-called Korssund chair, the very master chair in the church.
Owner: I <i>Askvoll bygdebok I.</i> - Date: 1963. - Photographer: Tormod Rogne.
I <i>Askvoll bygdebok I.</i>
1963.
Tormod Rogne.

The altarpiece is a copy of the old altar front. The original from about 1250 is now exhibited at the University Museum of Antiquities in Oslo. The copy, made by Oddvin Parr, was placed in the church on 20 August, 1977.
Owner: Askvoll kyrkjekontor. - Date: 2002. - Photographer: Ukjend.
Askvoll kyrkjekontor.
2002.
Ukjend.

The pulpit from 1675 is made by Henrich von Wollum in a baroque style. It has the following inscription: 'To the honour of God this pulpit has been donated by Hindrich von Wolst on the island of Hindøen (Hindøya) and by Anne Søfrensdatter Vissing Anno 1675.'
Owner: I <i>Askvoll bygdebok I.</i> - Date: 1963. - Photographer: Tormod Rogne.
I <i>Askvoll bygdebok I.</i>
1963.
Tormod Rogne.

The hymn board from 1775 is one of the few hymn boards which have been preserved from our old churches. The hymn board is made in a rococo style and is both extraordinary and practical. It is furnished with wall lamps as in the mirror lamps from the rococo period.
Owner: <i>Firda.</i> - Date: 1997. - Photographer: Aud E. Grøneng.
<i>Firda.</i>
1997.
Aud E. Grøneng.
resources:
Aaraas, Margrethe Henden m.fl.: På kyrkjeferd i Sogn og Fjordane - 1. Nordfjord og Sunnfjord. Selja Forlag. Førde 2000.