Road and ferry between Byrknesøy and the mainland

The road connection between the islands of Mjømna and Byrknesøy was officially opened on 13 September 1997. This was 40 years after the county governor Nikolai Schei and the county director of public roads Egil Abrahamsen for the first time came to the islands to assess the possibility of linking the islands. The bridge between Sandøy and Mjømna was completed in 1993, and in 2006, the construction work was started to connect the islands to the mainland by road and bridge. 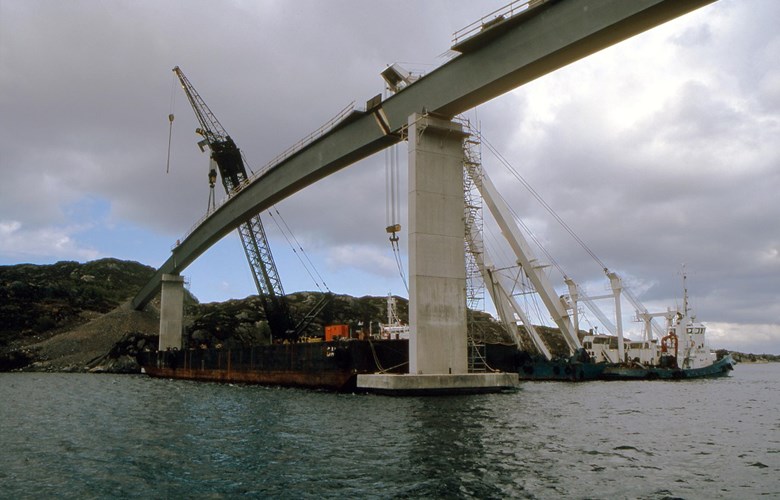 New ferry connection across the Fensfjord

The second step was road connection between the islands of Sandøy and Mjømna with a bridge across the strait of Mjåsundet. The bridge was completed in 1993, and was officially opened on 9 July. The 217-metre-long bridge rests on massive fills. It is special in the sense that it is painted in a warm red colour. This was done to make it easier to see the bridge.

Ferry operation is an expensive affair. Just the ferry subsidies for the connection Sløvåg-Skipavik-Gråvik-Leirvåg cost the county approx. 11 000 kroner every day. Consequently, a road connection between Mjømna and Byrknesøy was given priority both by the local community and the county authorities. In 1993, the master plan was approved, and in 1995, the county council got national approval to raise a loan. The road project was financed with 40% covered by the county and the 60% by the national authorities. The ferry connection Sløvåg-Gråvik now came to an end, as was the case with some local boat services. The subsidies saved would be enough to pay for most of the 40% of the expenses to be covered by the county.

Even if people were highly optimistic after the opening of the bridge, they still dreamed that it would be possible some time in the future to find means in the budget to build a bridge across the strait of Brandangersundet to the mainland. In 2008/09, this dream will come true. The work to connect the islands to the mainland was started in 2006, and in 2007, the construction of the bridge itself will be started. A total of 11 kilometres of road will be built. The bridge will be 300 metres long. The main span of 220 metres will be "ready made" on land and lifted into place by means of two huge floating cranes.

The work on the 376-metre-long Mjømnessund bridge started in September 1995 and was completed two years later. The bridge was built in steel and concrete in sections on land. The sections were then lifted out and mounted. The longest section measured 105 metres and weighed about 460 tonnes. The Mjåsund bridge between Sandøy and Mjømna was the first bridge in the country to be built according to this construction principle and the Mjømnesund bridge was the second. 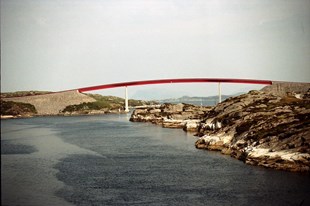 It is no easy matter to mount such huge bridge sections. It could only be done when the sea was completely calm. Once there was an incident that could have become very dramatic. The local express boat passed the work site with a higher speed than agreed beforehand, and, in addition, the boat sped up much too early. Fortunately it all went well.

On 13 September 1997, the road connection between Mjømna and Byrknesøy with the Nappsund and Mjømnesund bridges was officially opened by the county council chairman Knut O. Aarethun. Even if the weather was wet and cold, people turned out to celebrate that Mjømna and Byrknesøy had been connected by road. The bad weather did not cast a damper on the festivities.

Road festivities are a traditional part at all road openings, and this occasion was no exception with a comprehensive cultural programme. One of the songs went like this:

(freely translated:) We have bridges, we have roads, We have energy and vitality, So we face the future with optimism.

Even if people were highly optimistic after the opening of the bridge, they still dreamed that it would be possible some time in the future to find means in the budget to build a bridge across the strait of Brandangersundet to the mainland. In 2006, the planning was started, and the objective is to start the construction work itself in 2007.