Like a green oasis the farm of Tingastad lies in between steep and polished rocks and hostile screes on the shore under the mountain of Storehogen and the hill of Haukåsen, and with a view towards Frønningen and the Aurlandsfjord. This is an isolated place, and nobody lives any longer at the farm. A few hundred metres east of the farm houses we find a small water-powered saw mill which today is the property of De Heibergske Samlinger - Sogn Folkemusem. 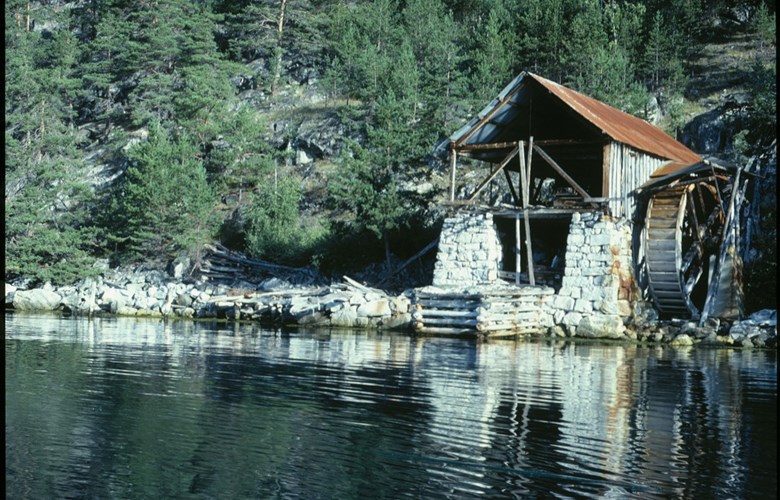 This is the Tingastad saw mill, one of the few water-powered gate saws left in Sogn. Tingastad and the surrounding forest were - and still are - common land, owned by farmers in Vik, Fjærland, Feios and Leikanger. Some of the area is also owned by the state. The forest early laid the foundation for the operation of a saw mill, and as early as 1658, it is said that there was a saw mill there. The present saw mill, however, is not so old. It was constructed by Andreas Anderson Bøthun in 1905. Andreas Bøthun rented the farm of Tingastad from the rural commons, and he also worked as a forester for them.

Before the building could start, a crag had to be blasted to get a big enough site for the saw mill. The blasted rocks were used to build two solid columns to support the floor of the saw mill at the front. At the back the floor rested on solid rock. Anders Bøthun hired the carpenter Anders Haukås-Eide from Eidet in Sogndal to build the saw mill. All the timber and woodwork needed was cut on site. Two of the walls, the back wall and the long sidewall facing the brook and the waterwheel were panelled, whereas the remaining two walls were open. This is where the logs were taken in from the log dump, and sent out as finished boards and planks. The saw frame itself was made of wood and of a traditional type.

A water reservoir and a wooden water canal were built, and a so-called" underwaterwheel" where the water hit the paddles underneath the wheel. A small quay was built just outside the saw mill, and another one just east of the building where the "jekts" could load the finished products. 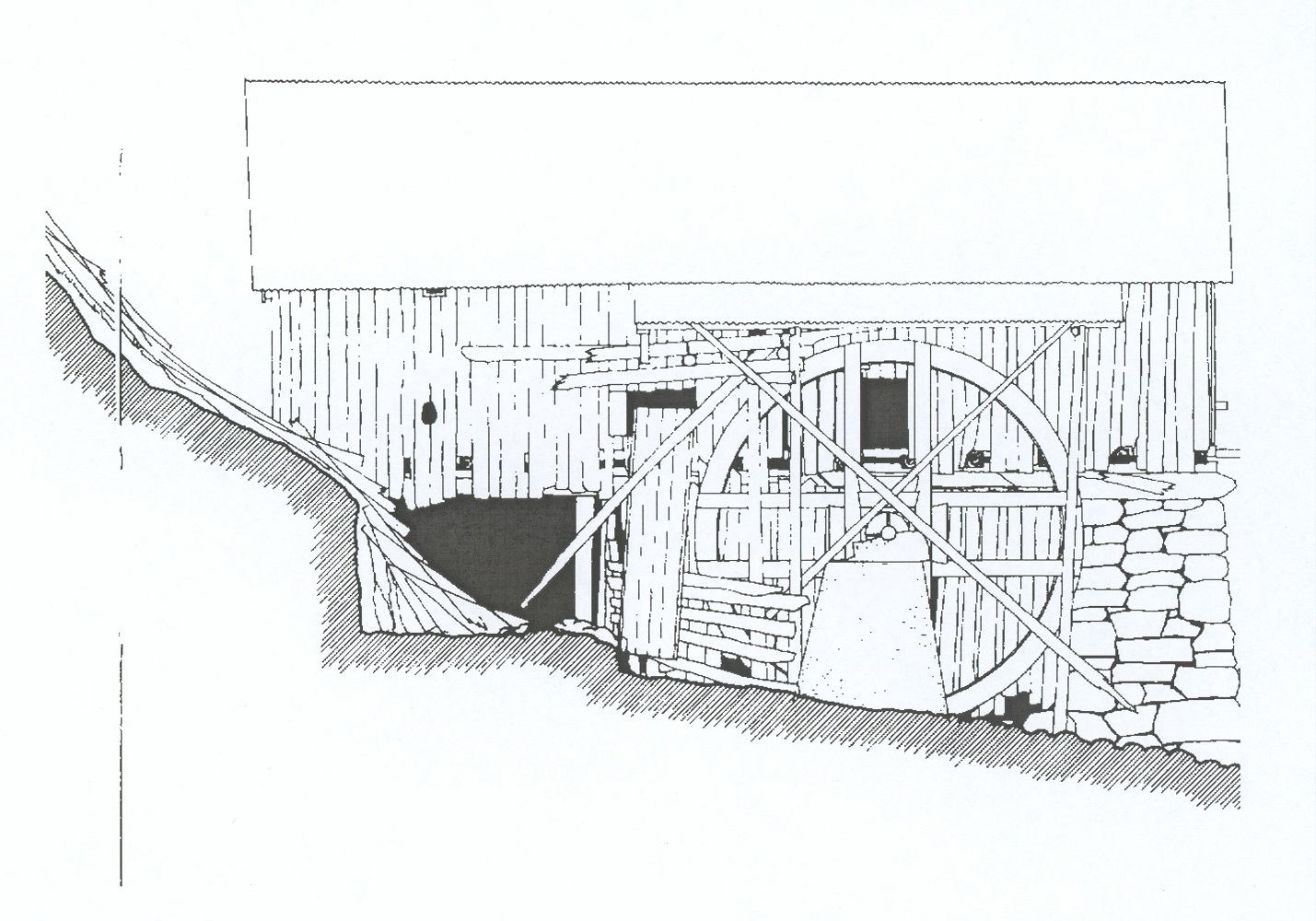 In the 1930s, the saw mill was modernized. They bought a Swedish gate saw of iron, with nine saw blades, from Kristian Knudsen at Hermansverk, after his saw mill had burned down. In addition, a new, big "overwaterwheel" was built that could get more effect out of the water, at the same time as it prolonged the season of the "flood saw" with at least two weeks. Once again Anders Haukås-Eide built the saw mill. Now it was Per Bøthun, son of Anders Bøthun, who operated the saw mill. From a technological point of view, the saw mill was now much more advanced. By means of cogwheels, shafts and belts, the water power was transferred to the saw itself.

The new saw mill was not in operation for a very long time. Shortly after the Second World War, the new age caught up with Tingastad and the saw mill. New technology and new regulations were introduced in forestry and the timber trade, and it was no longer profitable to operate the saw mill at Tingastad in the old-fashioned way. Consequently, the saw mill was no longer in use after the late 1940s. In the 1980s, plans were made to move the saw mill to De Heibergske Samlinger - Sogn Folkemuseum at Kaupanger, and in 1985 detailed and accurate measurements were taken. These plans have not as yet been implemented, but in the late 1990s, the museum was given the property right to the saw mill. The museum is also responsible for supervision and maintenance. Regardless of whether the saw mill is moved from Tingastad at some point in the future, or if it remains there, it will, nevertheless, be an important cultural heritage site from the pre-industrial forestry and saw mill industry in the first half of the 20th century.

The saw mill was accurately measured in 1985. At the front the building rests on two solid stone foundations made up of rocks that had to be blasted to get a big enough site for the saw mill.
Owner: De Heibergske Samlinger - Sogn Folkemuseum. - Date: 1985.
De Heibergske Samlinger - Sogn Folkemuseum.
1985.
resources:
Rune Tangstad: Oppgangssaga på Tingastad. I Årbok for Sogn. Nr 33. Sogndal 1987.