The burial mounds at Ytre Moa

In addition to six house sites, 20 burial mounds and a menhir (memorial stone) are located on the Moa terrace. Some of the burial mounds are found in among the houses, whereas the majority is gathered in a row, east of the farmyard. The mounds vary in size and form, being round, oval or oblong. Only a few of the burial mounds at Ytre Moa have been investigated. In addition, a grave under level ground has been excavated, and a boat-shaped area of paved stone. The latter is probably a boat grave. All the graves were archaeologically excavated at the same time as the house sites in the summer months of 1964-1966. 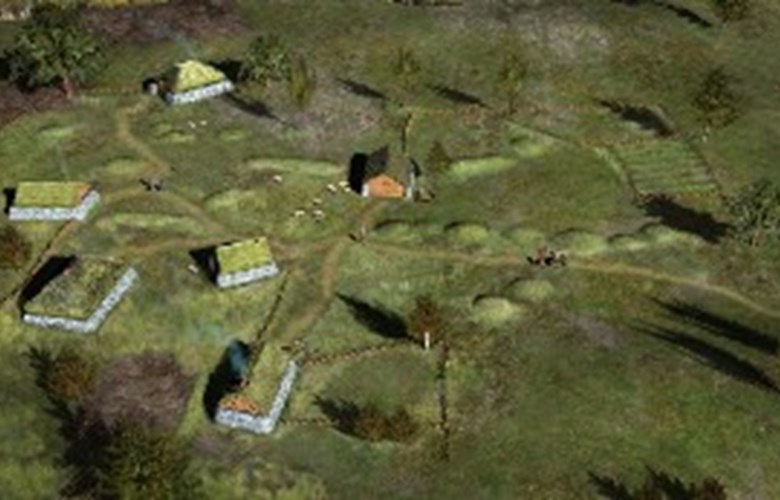 Reconstruction of the Viking farm at Ytre Moa

Burial rituals in the Viking Age

In the Viking Age both burial in mounds and under level ground were common practice, with or without any markings on the surface. The burial mounds were placed in such a way that they were clearly visible, frequently located near the farmyard or by the road leading up to the farm or at places from which the farmyard could be seen. Sometimes they are gathered in clusters, ranging in number from two to 20 mounds. The form can be round, oval or oblong, with varying sizes.
The Oseberg mound is said to have measured more than 40 metres in diameter and a height of four metres, whereas most of the burial mounds at Ytre Moa have had a height of 0.5 metres and a diameter of five to ten metres.

Burial rituals in the Viking Age have varied as we find both burned and unburned burial sites. As for the objects found in the graves these may vary, both in terms of quantity and selection. The most common objects and artefacts are jewellery, weapons and tools linked to various handicrafts and trades such as carpentry, smithies, textile crafts or farming. Women and men have been equipped with different objects into the grave. Textile tools and kitchen utensils are common objects found in women's graves, whereas we frequently find weapons, hunting gear and carpentry tools in men's graves.

The grave under level ground

At the edge of the terrace a young boy found a bridle ring made of iron. When the archaeologists took a closer look at the site, they understood that the bridle ring originally must have been in a grave. The terrace edge was now the upper part of an open landslide and most of the grave had probably disappeared in the landslide. We have no knowledge when this could have taken place. 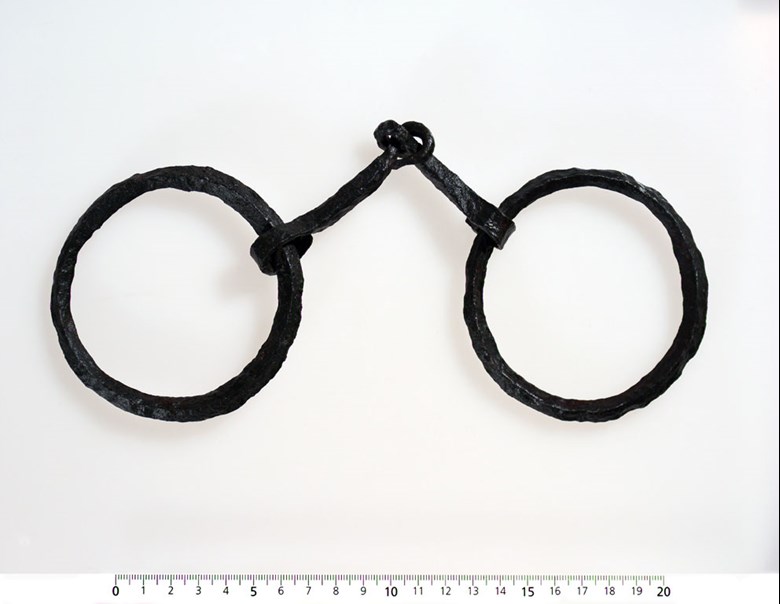 Close to the site where the bridle ring was found, the archaeologists found more objects: a celt with an open axe eye / socket and some small iron nails. A number of flat stones protruded from the edge of the terrace where the bridle was found. These stones are probably remnants of the stones covering the grave. Unfortunately, no remnants of the grave itself were found. However, based on what is known of burial rituals in the Viking Age, we can assume that this has been an unburned man's grave. Bridle and axe are objects commonly found in men's graves from this period.

Seven of the burial mounds were investigated: mounds number 3, 4, 7, 10, 12, 16 and 19. When the archaeologists started on their excavation of mound 7, they quickly realized that this was not a burial mound after all. The experts found out that the mound was simply a wall consisting of rocks, gravel and earth, and "stretching out from" the southern long wall of house site B. This wall may have been a guiding fence or part of an enclosure.

The archaeologists were more certain that the other mounds investigated were in fact burial mounds, both in terms of their form, their construction and location. Mounds number 3,4,10 and 12 were all relatively small, about five to six metres wide and 0.5 metres high, with a round or oval form. They were built up by rocks covered by a thin layer of earth. No remnants of graves or signs of interment were found in them. With the exception of a whetstone from the early Iron Age found in an upright position at the bottom of mound 4, the archaeologists found no other objects in any of these mounds.

The biggest mound at Ytre Moa

On the other hand, they found a number of objects in mound number 16: horse teeth, two whetstones, various iron fragments and a burned grave. Mound 16 was the biggest of them all, measuring about 10 metres in diameter and with a height of 0.75 metres. The mound had an even, round form, but had a dip in the centre, most likely the result of former plundering.

Horse was a common grave gift

Horse teeth were found dispersed all over the mound. Both horse and harness used to be common grave gifts in the Viking Age. One case in point is the grave of the Oseberg queen, where skeletons of between 12 and 15 horses were found. Harness and various objects linked to travel by horse constitute some of the most numerous and abundant groups of objects form the Viking Age. Throughout the whole country more than 1000 graves with such objects have been found (Solberg 2005). The grave itself was located at ground level with charcoal and bones spread out over an area measuring 1.5 metres across. Interments of this kind are referred to by archaeologists as "fire flakes", and this is a very common tradition from the Migration period (from about 400 AD) until the end of the Viking Age (about 1050 AD).