Florø was founded in 1859, and was for close to 150 years the only city in the county of Sogn og Fjordane. What was highly unusual was the fact that the city had no road connection whatsoever, in spite of being located on the mainland. Only in 1945 was Florø linked to the rest of the county by road. The roadwork had been going on since 1922, mainly financed in the form of employment relief from the state. Florø was a periphery in the county economically and politically until after the Second World War. This is probably the reason why the only city in the county had to wait for nearly 90 years to get a road connection to Førde and the rest of the region. 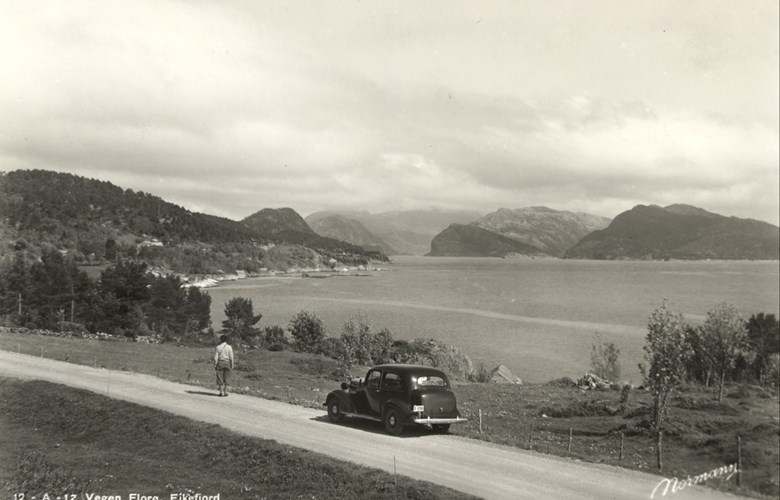 The new road between Klavelandet and Brandsøy in the 1930s.

Storting decision led to the founding of a city
In 1858, the Council of State appointed a commission with a mandate to discuss the location of a city in the region of Sunnfjord or Nordfjord. This had to do with a desire to increase the trade of fish and fish products, and there was also dissatisfaction with the trade in Bergen. Florø was chosen as it had a central location along the inner shipping lane on the coast. In addition, Florø was located close to the economically important spring herring fisheries. On 16 May 1860, the Storting passed "a law concerning the founding of a city at Florøen in the Kinn parish." The location of the new city was between the two farms of Øvre and Nedre (Upper and Lower) Florø with a population of hardly more than 50 persons. 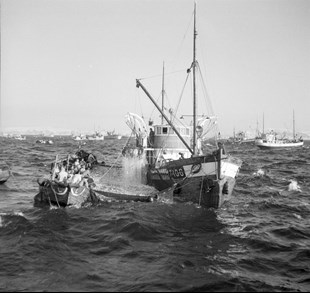 On the road connection in the commission report
The commission that was appointed to discuss the city issue, expressed as early as 1858 that: "Florøen has such a location that, if in time this is considered necessary, a road can be built from Førde and from Hyen in Nordfjord, where a more than 20-kilometre-long public road has already been completed. The city will thus become linked overland with the inner districts". Close to 100 years would pass until these ideas of the commission could be realized. 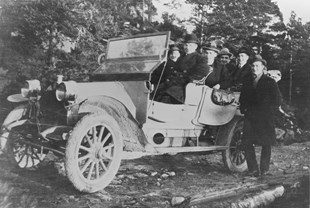 Road demands from the 1890s
The first person to start working for a road connection between Florø and Eikefjord was F. T. Lorenzen, mayor (1888-90) and district doctor in Kinn (1880-90). The city council of Florø asked the mayor in 1891 to turn to "the county governor with a request to get the road surveyed, at least as far as to Brandsøysundet". Førde, Gloppen and Kinn all supported this request. They demanded a survey of a road between Florø-Eikefjord-Førde and Hyen. The issue was brought up by the municipality both in 1892 and in 1893, and it was pointed out that the road connection would be of vital importance to the outlying districts. At the same time, people were also discussing a road between Førde and Naustdal.

Many demands, but no action
In 1906, the city council appointed a committee that would present the road issue to the county council. Very little came out of this initiative. In the first road plan of 1907, the Florø-Brandsøy road was not given any priority until 1932, and then as a rural road. The road further on to Eikefjord was categorized as a main road, but would not be included in the 30-year period. In the traffic plan of 1919, it was written that Florø "suffers under the lack of overland road connection with the city's surrounding villages, and that this was indeed a unique situation". 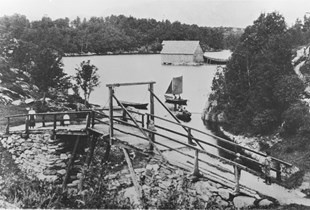 To the capital to ask for money
In 1920, the city council once more brought up the demand to build an "automobile road" from Florø to Eikefjord and further on to Naustdal, Hyen and Sandane. Kinn and Florø wanted to allocate 7 % to the Florø-Brandsøy connection. The Florø mayor went to Oslo to apply for means through employment relief.

Employment relief and threat of strike.
In 1922, the roadwork was started with employment relief means, on the condition that the district covered one tenth of the cost. The cost of the whole project was estimated at 353,000 kroner. The road between Florø and Brandsøysundet (6.1 kilometres) was completed in 1937 at a cost of 330,660 kroner. The work was carried out not without conflicts. It was not very well received when the poverty commission in 1934 refused to pay the road workers a small sum in advance, which they had been promised. The workers threatened to go on strike if they did not get the advance payment. The times were hard for many people. The board of aldermen did a turnaround and the poverty commission was told "that workers with such big families that they cannot cope with the advance payment, will get an appropriate supplementary payment per week in addition to the advance paid out. The piecework rate was 0.50 kroner per hour with a family supplement ranging from 0.03 to 0.12 per hour.

Road by way of Vevring or across Ramsdalsheia
The road demand was brought up on a number of occasions both by the municipalities of Florø and by Førde, supported by all other involved municipalities, but the whole time other road projects were given priority. The first allocation to the Førde-Florø connection was given in 1911 to be used on the road Førde-Naustdal. The last allocation came only in 1937/38. There was an increased interest in the road project between Florø and Førde, especially since it was decided in 1930 to build a county hospital in Florø. However, doubts were raised in the choice of road line, either straight across from Naustdal to the valley of Ramsdalen or by way of Vevring along the fjord. The latter was preferred, also by the Storting. However, it was the line across Ramsdalsheia that was eventually built. 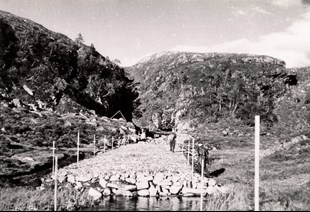 Germans speeded up the road work
In 1937, the work with the road from Brandsøy to Eikefjord was continued. When the war broke out in 1940, two kilometres of road had been completed. At the same time, the financing of the road between Naustdal and Storebru had been secured. Iy was important for the Germans to build a road to Førde for strategic reasons. Then they would have an opportunity to retreat in the case of an allied attack on the city. The Public Road Administration was in charge of the work which was continued in great strength. In 1942, they started work on a number of road sections simultaneously. Russian prisoners of war were also used for a while. 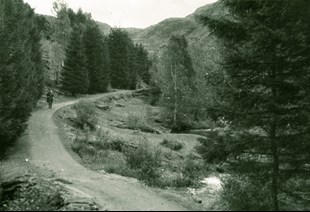 Question of sabotage
For long sections of the road, there were stone walls straight down to the fjord. Once when they were making a stone wall by hand, the wall foundation collapsed, and the whole stone wall - 50 metres long - fell into the fjord. This incident was investigated by the Germans who suspected sabotage, but the investigation revealed that there was a natural explanation. The new wall foundation was secured by blasting into the rock.
The co-operation between the German occupation forces and the Public Road Administration was far from smooth. Sectional engineer for the road section in Sunnfjord, Erling Skåre, was in charge of the road project. In July 1944, he was arrested by the Germans because he had expressed himself negatively about the Norwegian political party "Nasjonal Samling" (National Unity). The district chief road administrator Alf Torp threatened to stop the whole road project unless Skåre was set free.

Across the Ramsdalsheia to Naustdal
In 1944, the road to Eikefjord was completed. On 15 July 1944, the bus company Firda Billag started regular bus services between Florø and Eikefjord. The Sunde tunnel work had taken much time. The majority of the workforce was now used on the further roadwork into the valley towards Ramsdalsheia. In 1945, a total of 240 men were now employed on various sections from Storebru to the Indrekvam bridge in Naustdal. In the spring of 1945, it was possible to drive between Florø and Førde on highway #585. Some road sections were rather bad. The final completion and official opening of the road took place only in 1952. 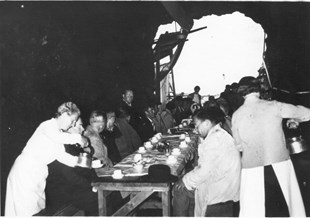 It was the spring herring fisheries that led to the founding of the city. However, the fisheries varied from one year to another, and the city never became the dominating fishing harbour that people had hoped for. In the 1950s, however, the herring fisheries were extremely rich, and with the road building and industrial development, the city flourished. The picture is taken on the herring fishing ground at Sendingane in February 1955.
Owner: Fylkesarkivet. SFFf-100031.100764 - Date: 1955. - Photographer: Kåre Botnmark.
Fylkesarkivet. SFFf-100031.100764
1955.
Kåre Botnmark.

The first car in Florø. In 1935, the car was referred to by a journalist from Bergen: 'Up in one of the higher streets in Florø we find the loneliest car in the country. It is a rarity on the island, actually a depressive sight. This is no joke. The road from Florø to Førde has not yet been started.'
Owner: Kystmuseet i Sogn og Fjordane. SFFf-1987012.0056 - Photographer: Ukjend.
Kystmuseet i Sogn og Fjordane. SFFf-1987012.0056
Ukjend.

In 1873, a canal was built between Brandsøy and Florelandet. Shortly afterwards, a bridge was built across the canal. The bridge had a mid-section that could be lifted so bigger boats could pass without having to lower the rig. When the bridge was rebuilt in the mid-1920s, the bridge was made permanent. It was built of solid wood material. In 1932, the old wooden bridge was rebuilt to a permanent bridge made of steel beams and reinforced concrete road surface. The bridge was a part of the first main road from Florø to Førde.
Owner: Offentleg eige. SFFf-1987012.0057 - Date: Rundt 1900 - Photographer: Ukjend
Offentleg eige. SFFf-1987012.0057
Rundt 1900
Ukjend

The work on the road section Indrekvam bridge-Storebru started in 1933 on employment relief means. Most of the money was spent on the section between Indrekvam and Ramsdal, where there was no road beforehand. The length of this section was about eight kilometres, including a 230-metre-long tunnel under the pass of Ramsdalsskaret. Here we see the breakthrough of the Ramstad tunnel with the party inside the tunnel afterwards. The tunnel was drilled by hand.
Owner: Henrik Aamot. - Photographer: Ukjend.
Henrik Aamot.
Ukjend.
resources:
Nagell, Otto: Det norske vegvesens historie med oversikt over Statens vegvesens virksomhet i tidsrommet 1820-1940. Bd. III, Oslo 1950.
Thingnæs, Magnus: Florø Norges vestligste by 100 år. Florø 1960.
Stavang, Harald J.: Flora. Kulturhistorisk vegvisar. Selja Forlag 1999.