In 1866/87, a sturdy lighthouse with a solid reinforced stone and mortar foundation was built on a slippery, rounded-off skerry in the middle of the shipping lane. 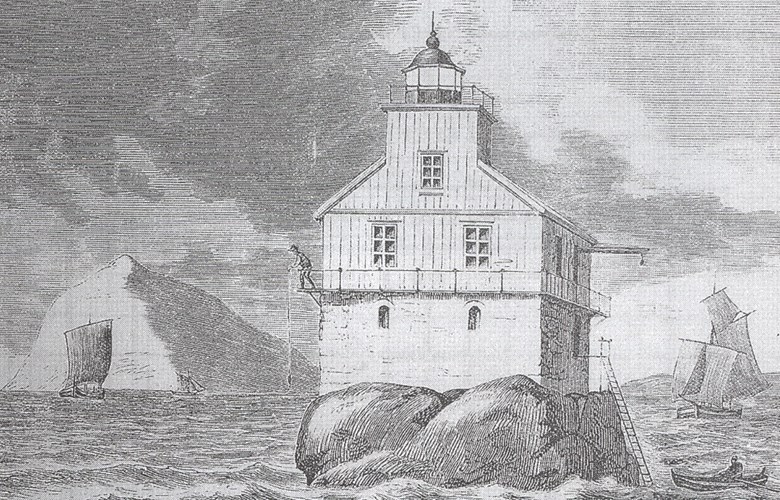 A drawing of the newly built Stabben lighthouse in the late 1860s. The lighthouse was built in the days of the legendary lighthouse director C. F. Diriks. The slippery skerry in the shape of a chopping block was used to the last square foot. ('Stabben' actually means the chopping block).

The timber house measuring 12 by 8.3 metres with its foundation wall consisting of 108 cargos of stone, occupies practically every square foot of the skerry. Towards the northwest, where the skerry is most exposed to the ocean through the Hellefjord, the foundation wall is built like a ship¿s bow to minimize the effect of the breakers.
The lighthouse has a characteristic shape, and it has become a landmark and a popular motif for artists and photographers ever since it was completed some 130 years ago. With the lighthouse at Kinnasundet (also built in 1867, but closed down in 1913), the Stabben lighthouse was the first lighthouse to be built in the Sunnfjord region. Consequently, this meant that there were lighthouses both along the outer and inner shipping lanes when the great spring herring fisheries were coming to an end. 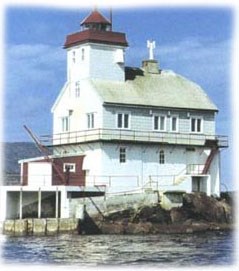 The reason why the lighthouse was built was the dangerous and treacherous waters with extremely strong currents. This was most likely one of the most difficult navigational points along the Norwegian coastline, which is highly evident in the many ships that went down or ran aground, even after the lighthouse became operational. The first journals have been lost, but there are more than enough incidents reported. In 1889, a "jakt" ran aground with such a force on the lighthouse skerry that one of its booms drilled a hole in the lighthouse wall, and part of the rigging was entangled in the hoisting crane. The following year the S/S ¿Fiskaren ran aground at full speed. The crew was saved but the ship was lost. They had not paid enough attention to the strong currents. In 1910, "Astrea" ran aground on the Grasskjeret skerry, and in 1920, "Emma Sauber" ran aground on Stabben.
Some shipwrecks from the inter-war period may supplement a much longer list. 1918: "Factor". 1923: "Cymric Vale". 1929: "Hofplein". 1932: "Heinrich Beermann". 1936: "Emma Reimer". 1938: "Gaa Paa". Three ships ran aground on Stabben itself: "Liv" in 1918 and "Kvalen" in 1931, besides the previously mentioned "Emma Sauber" in a raging storm on 26 January, 1920. 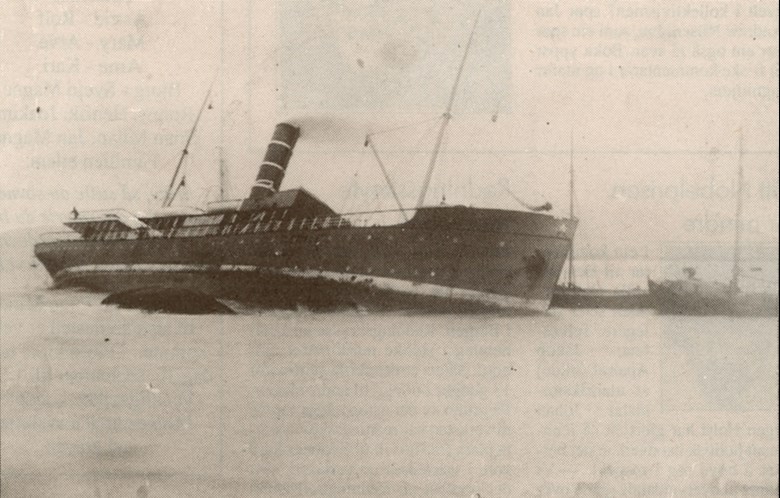 The lighthouse became operational on 1 October, 1867. In 1905, some changes were made, the wooden tower was made bigger, and the luminous intensity of the lantern was improved with a 4th order lens. Screening with eight sectors made sailing safer. A new hoisting crane was installed at the station and the landing conditions improved. The external form of the lighthouse has remained unchanged since that year, and technical equipment and original building elements have been preserved. The lighthouse station was manned from 1867 until it was automated in 1975. A sea cable has provided Stabben with electricity since 1965. Today the lighthouse is under the supervision of the lighthouse keeper at Ytterøyane further to the west. The lighthouse is now listed in accordance with the Directorate for Cultural Heritage¿s National Lighthouse Preservation Plan.

On 5 January, 1905, the coastal express steamer 'Astrea' ran aground on Grasskjeret. The steamer was on a northbound course when it hit the rock three cable lengths (600 yards) east-northeast of Stabben. The picture shows the ship on the underwater rocks at Grasskjeret. Much smoke is pouring out of the funnel because the pumps are running at full steam. Alongside a number of smaller boats are trying to salvage as much as possible from the shipwreck. Crew and passengers were rescued, but the steamer eventually went down.
Owner: Liv Svendsen / I avisa <i>Firdapsoten</i> 11.09.1993. - Date: 1910. - Photographer: Ukjend.
Liv Svendsen / I avisa <i>Firdapsoten</i> 11.09.1993.
1910.
Ukjend.
resources:
Stavang, Harald J.: Flora - kulturhistorisk vegvisar. s. 275. Førde 1999.
Olderkjær, Ove: Norske fyr, ei reise langs kysten. s. 76-79. Oslo 1999.
Riksantikvarens rapporter nr. 24: Norske fyr - nasjonal verneplan for fyrstasjoner. s. 96. Oslo 1997.
Seim, Einar: Fyrar og farljos. rentefritt i 10 år. (udatert, ikkje prenta).