The Solund islands are on the doorstep of communication across the North Sea, centrally and strategically, with good harbours and plenty of hiding places. For this reason the islands were always an important link in the line of defence which the kings built on the coast for the protection of the country. 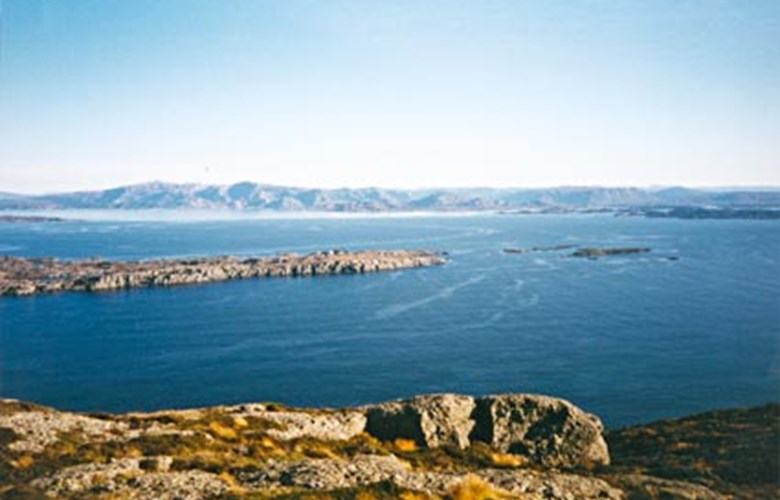 View from Håfjellet toward southeast. The promontory pointing south into Sognesjøen is Tungodden. Above Oddeholmane there is a glimpse of Glaværet and Skjerjehamn. All the waters in the picture were used frequently by enemy ships.

For the benefit of king and farmers

From around the year 900, when the country was unified, a stronger and more effective territorial defence was needed. The coasts in the south and the west were particularly vulnerable to attack. It was therefore important to have a coastal defence that was able to react quickly and repel, or even better, defeat the enemy. In the Viking period - after much negotiation - arrangements and agreements between the farmers and the king were established, which were beneficial for both parties.
The coast was divided into defence districts, and such an area was called a "skipreide" (from old Norse: reida ut skip (equip a ship)).

The Solund people belonged to Utvær "skipreide". The area corresponded with Solund of today, minus Losna. Compared with the other fifteen "skipreida" eastward in the Sogn district, Solund seemed large, but was more sparsely populated.
Along the weather-beaten west coast with exposed waters and numerous attacks by the enemy, it was logical to equip larger ships than elsewhere along the coast. While others equipped twenty-seaters, the people on the west coast equipped 25. This means ships with 25 pairs of oars. However, there could be up to a hundred men onboard if the king ordered the "leidang" fleet (conscripted war ships) out of the country. The "skipreida" was obliged the keep boat-houses for the vessels.

The king appointed the first mate. If one man could single-handedly cope with the baling of water until they reached the main sea lane, the ship was declared seaworthy. An old ship could not be burnt until the boards were fastened to the keel of the new one.
The farmer (out here he was more of a fisherman) was to provide food and oars. If he sent a cook along, he himself could stay at home. When they went to sea, they were expected to bring along food for two months for each pair of oars. The food was of two kinds: flour and butter. There were fines for those who did not meet, those who deserted, those who took the rudder from the first mate, etc..

It is not known where in Solund the boat-house stood, landing facilities for boats and harbours were not scarce where people lived. However, it could be difficult to provide enough food and enough men when the ship was called to action. Yet they had to sign on when King Harald Hardråde - according to the book Heimskringla - gathered his forces in Solund. No wonder the dreams augured the darkest tragedy, since he fell at Stamford Bridge in September, 1066. But if it is true that he left with close to 200 "leidang" ships, in addition to provision ships and smaller boats, there must have been quite a crowd of people on the islands of Solund.

Beacon fires were burning in times of unrest

An important part in the defence were the warning beacons. A beacon (old Norse: víti) was a prepared bonfire on a mountain top, and at Utvær "skipreide" there were several of them. Place names such as Vetefjellet, Veten, are evidence of links in the chain of warnings. On Håfjellet and Nesøy beacons stood ready to be lit, and also on Krakhellenipa and Pollatinden. When unrest was expected, there were guards at the beacon, and outlawed was the one who fell asleep. And he was fined if he was careless and lit the fire for friendly ships. The beacons on Nesøy and Håfjellet were well pointed toward Gulen and Sognefjorden. The beacons warned locally and further along the coast.

Gokstadskipet gives an idea of what the "leidang" ships could look like, even though the "leidang" ships on the west coast were larger. They had 25 pairs of oars while Gokstadskipet had 16. A copy of Gokstadskipet in 1893 sailed across the Atlantic in 28 days.
The "leidang" ships could make six knots when rowed, with two or three men on each oar. By sail, they could make 11 knots. In 1925 the American Postal Agency issued a series of stamps in connection with the centenary of the start of the immigration to America from Norway. One of the stamps has the ship from 1893 as its motif.
Owner: Hermund Kleppa. - Date: 1925. - Photographer: Ukjend.
Hermund Kleppa.
1925.
Ukjend.

On the mountain of Pollafjellet one of the tops is called Viten, and here the beacon stands. Further north is Pollatinden, 541 metres above sea level.
The name Viten reflects beacon fire and watch, and a freer and more visible point of warning for the local area and for the sea lane north/south is hard to find. The picture shows the oldest beacon that people can remember. It was round, had a diameter at the foot of approx. 1.5 metres. The height could be 2.5 metres. Here was particularly fine stone to build with, and the beacon was smooth and elegant as if it had been cut on the lathe. It was English agents who, for some reason or other, tore down the beacon while they were here in the mountains during the Second World War. Some time later it was rebuilt with a slightly different shape, now quadrangular.
The people in the picture are Hagefjord ungdomslag (youth association), who hiked to the mountain top some time in the 1920s.
Owner: Olav Iversen. - Date: Ca. 1925. - Photographer: Ukjend.
Olav Iversen.
Ca. 1925.
Ukjend.

The illustration from Snorre tries to describe the situation when King Harald Hardråde is sailing down the river of Nidelva in the new Ormen. This ship had 35 pairs of oars, but the long and heavy ships such as this probably needed one or two men on each oar. No wonder the women on the river bank are watching in awe and are thinking the ship has eagle wings.
resources:
Gulatingslovi. Det norske samlaget.
Bosheim, Oddkjell:Vetar i ytre Sogefjorden, artikkel i Kjelda, nr. 1, 2000.
Sturlasson, Snorre:Kongesoger, Gyldendal Norsk Forlag, Soga om Harald Hardråde.
Privatperson:
Olav Iversen.
Serien Norrøne Bokverk, Det norske samlaget.