The private graveyard of Fredensborg

Fredensborg is situated in a beautiful park close to a small lake, about half-an-hour's walk from the Lillingston residence. This used to be the private graveyard of the Landmark family. 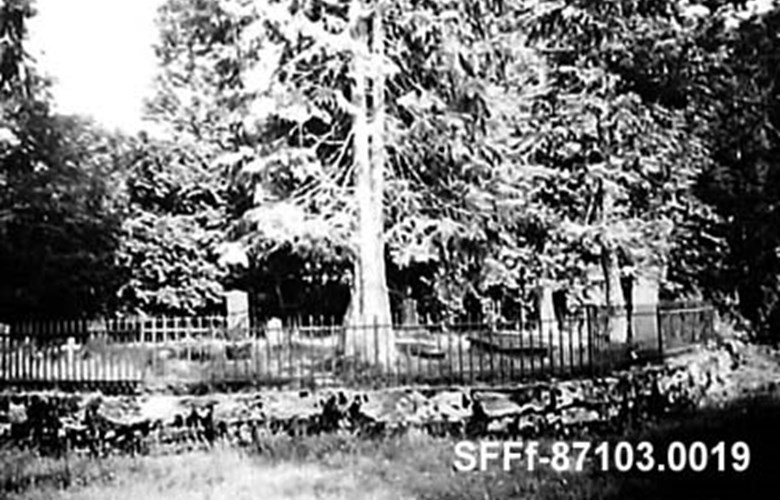 From the graveyard of Fredensborg.

In 1824, the district recorder Nils Landmark at Tysse was granted the right by royal decree to build a special graveyard for his own family, and this he located to Fredensborg. He built a road up to and around a bog area where he made a dam. In the resulting lake he set out fish that could be netted. He also planted deciduous trees along the alley-ways. When the state authorities bought the forest at Leitet in 1911, the family made the reservation that the national authorities should take over the maintenance of the graveyard. In the early 1990s, the road leading up to the graveyard was restored and information boards put up.

Outing destination for the upper-middle class

Landmark family had many high-ranking visitors and guests at Tysse, and in this connection it would be natural to include an outing to Fredensborg. Johan Theodor - one of Nils' sons - wrote in 1912:

"Around the graveyard a lovely park with gravelled roads and paths was built, alleys were lined with trees, and other trees were planted, turning the whole area almost into an arboretum. In the middle of the lake a fountain was installed for ornamentation, and the spouting jets of water high up in the air could be seen in the foreground of the alley-way leading up to the graveyard. In the summer, my parents took their guests up to this park, where they could find a restful place with benches and stone tables. Cool refreshments, tea, wine and cakes were served, while other guests in the party could ride or drive around the lake or row on the lake, entertaining the guests on land with song and music." 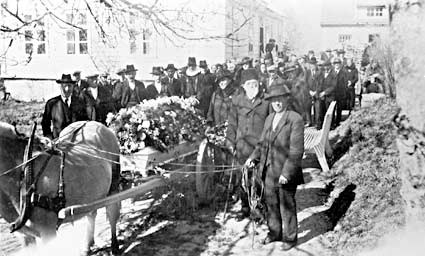 Marie Landmark's coffin was taken by horse and cart from Leitet to Fredensborg. In the centre of the picture we see the vicar Døskleland behind the cart. The man with the long beard is Michael Rasch Landmark, an elder brother of Marie.
Owner: Cecilia Hauge - Date: 1935. - Photographer: Ukjend.
Cecilia Hauge
1935.
Ukjend.