Nord-Vågsøy kyrkje is a longchurch built in concrete in the village of Raudeberg in the municipality of Vågsøy. The church, with a seating capacity of 420, was consecrated on 24 October, 1960 by the bishop Ragnvald Indrebø. The architect Ole Halvorsen made the designs. Up until 1 January, 2002, this church was the "sokn" church for the the Nord-Vågsøy "sokn" in the parish of Vågsøy. From that date on, the three "sokns" in the parish were united into one, and Nord-Vågsøy church thus lost its status as a "sokn" church. 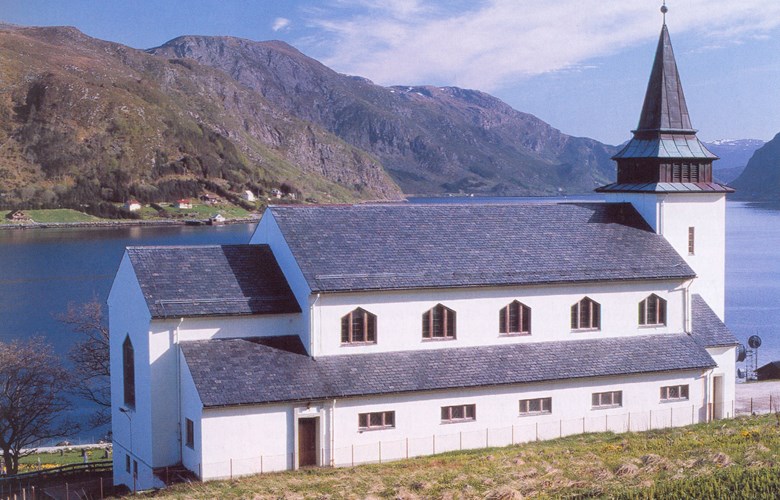 Like a landmark the Nord-Vågsøy church is located on the point of Røysaneset at Raudeberg. The three-nave concrete church is the second on the same site, built close to the site of the former church. The church is one of the last churches in the county to be built in a traditional style, and one of the few not having any church plate or interior objects from earlier churches on the site. The reason, of course, is the fire in 1945 which reduced the 19th century church to ashes.

Church with a day-care centre

The reason why the church was built in concrete may have something to do with the painful memories from the fire. People though it would be safer to build in concrete than in wood. But practical considerations also played their part. The point of Røysaneset is a weather-exposed site, and many people felt that concrete was better suited to withstand bad weather than wood. In retrospect, it must be said that concrete churches have proved to need just as much maintenance as wooden churches.

Even if Nord-Vågsøy church is built as a classic longchurch, it contains more rooms than are ordinarily found in a church. Half the basement is built into the terrain and contains meeting room, kitchen, and toilet facilities. In the mid 1970s, this part of the church was temporarily refurbished as a day-care centre, and has been used as such since then. The "sokn" council has asked the local authorities to find another place for the centre, so that the church basement can be used for church purposes, but it has taken time to find new premises for the day-care centre.

The nave itself is light and fairly simply refurbished. The pews are painted in pale blue and beige. The ceiling is flat and painted in blue sections. The chancel ceiling has a big central area decorated with stars. On either side of the central aisle there are six square concrete columns, and two under the gallery. Along the walls there is panelled wainscoting, whereas the chancel walls have painted boards.

The church room has windows in two rows up on the mid walls and down on the side-aisle walls. The vestries are placed on either side of the chancel, and beside the baptismal vestry there is a room with toilet facilities. Seen from the outside, it is the side aisles which give the church an especially elegant look. The square steeple base reaches above the roof ridge, in keeping with the style of the rest of the church. Above the base there is a small steeple neck with windows, and at the top a copper-covered spire. The steeple was badly damaged during the so-called New Year's hurricane in 1990 and this had to be repaired. Otherwise only the usual maintenance has been carried out since the church was completed.

Ship's bell in the interim church

A short while after the former church burned down to the ground in 1945, the biggest German military barracks at Halsøyr was consecrated as an interim church. This took place within a month after the fire, and this temporary arrangement was to last 15 years. The church bell used in the interim church is indeed a curiosity. It was actually the ship's bell from the coastal express steamer "Sanct Svithun", which sank off Ervika at Stadt during World War II. The ship's bell was given to the people of Ervik in recognition of their courageous salvage effort in this catastrophe. Upon the request from the vicar Ola Tungesvik, the neighbouring community of Vågsøy was allowed to borrow the bell for some time. Later on the "Sanct Svithun" bell got its rightful place in the Ervik church.

The discussion of the location of the new church caused conflicts. Some people felt that the church site should remain where it was, whereas others went in for building a new church at a more central location in the village. The argument for building a church at a central location was that this would lead to an increased use of the church outside the regular services. The "sokn" meetings, however, revealed a majority for the church site at Røysaneset. After all, this had been a church site since the mid 19th century. At this site the church would be visible for the passing ships, and close to the site were the burial mounds with their historical ties back to the Viking Age. These arguments were strong, and it was decided to build the new church on the previous site, but a little higher up in the terrain.

In 1952, the local council approved the plans, and three years later, the Ministry for Church Affairs endorsed them. It took another year to finance the project, and the reason was that the insurance sum for the former church covered only one fifth of the budgeted cost of the new church (final cost 750 000 kroner). In 1956, the project was fully financed, and shortly afterwards, the building permission was granted.

The altarpiece made by Jørgen Skaare from Vanylven is a stained-glass painting with the motifs of "The Holy Communion" and "The Victorious Christ".

On the altar there are two candlesticks, and like most of the interior objects in the church, they date from 1960. A three-branched candelabra in German silver dates from 1980 and is a gift from the "Raudeberg Indremisjon" (Evangelist association) in commemoration of the fourth centenary/centennial since the building of "Vaagsøe Capel" at Kapellneset. The Holy Communion set consists of a chalice, a paten and a wine flagon. In addition there is a pyx in German silver dating from 1982, with a cross symbol on the lid. The pulpit and the font are both made of wood. The baptismal bowl and the holy water ewer are made of brass.

Seen from the outside, it is the side aisles which give the church an especially elegant look. The square steeple base reaches above the roof ridge in keeping with the style of the rest of the church. Above there is a small steeple neck with windows and at the top a copper-covered spire. The steeple was badly damaged during the New Year's hurricane in 1990 and had to be repaired.
Owner: Fylkesarkivet i Sogn og Fjordane. - Date: 2002. - Photographer: Hermund Kleppa.
Fylkesarkivet i Sogn og Fjordane.
2002.
Hermund Kleppa.

Nord-Vågsøy church is built in the style of a classic longchurch, but contains more rooms than what is usually the case in most other churches. Half the basement is built into the terrain, and in the mid 1970s, this part of the church was turned into a temporary day-care centre, and has been used as such since then.
Owner: Fylkesarkivet i Sogn og Fjordane. - Date: 2002. - Photographer: Hermund Kleppa.
Fylkesarkivet i Sogn og Fjordane.
2002.
Hermund Kleppa.
resources:
Aaraas, Margrethe Henden m.fl.: På kyrkjeferd i Sogn og Fjordane - 1. Nordfjord og Sunnfjord. Selja Forlag. Førde 2000.