In 1905, Norway became a free and independent state. The union with Sweden was dissolved by resolution of the Norwegian Storting (Parliament) on 7 June. This article is about 1905 in the municipality of Askvoll. 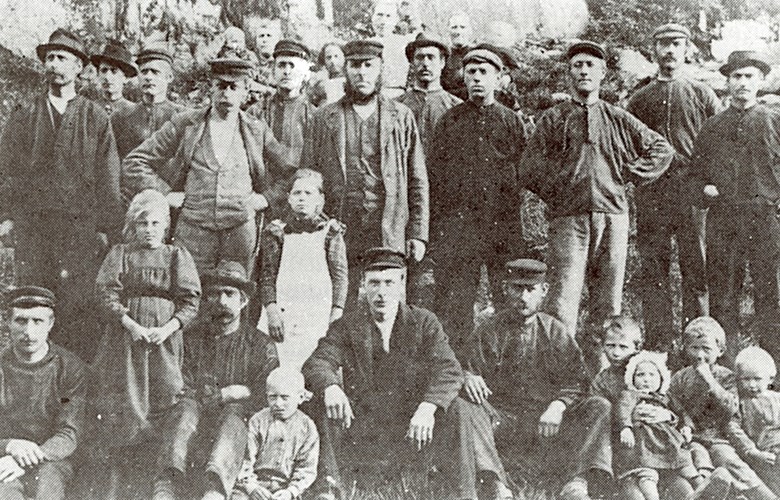 Workers and children at Stongfjorden around 1900. The industrial development started a few years before the turn of the century with the production of peat coal and iodine. The aluminium factory started production in 1908. In the summer of 1905, there was an accident at Stangfjordens Elektrochemiske Fabriker. A worker had his face badly burned when a steam pipe broke. He was taken to Bergen the following day.

In 1900, the population counted 2691. Agriculture and fishing were the most important industries. After an interruption, the Grimeli copper mines were in operation in 1906. Industrial activity had been started at Stongfjorden with an iodine factory and a peat coal factory. In 1906, English venture capitalists arrrived at Stongfjorden, and the first aluminium plant in Scandinavia started production in 1908. There were brick factories at Vårdal and at Helle. From Vårdal four million bricks were sold in the summer of 1905, the major part to Ålesund. The company of Vilnæs og Sætre Hellebrud cut flagstones on the farms of Vilnes and Sætre.

Holmedal and Kvammen
Holmedal sub-parish belonged, as we have seen, to Ytre Holmedal (Fjaler) municipality. The village of Holmedal had a boat stop, post office, and a woollen mill (Trollefoss.)
Kvammen was the "centre" of the part of Vevring municipality which was on the south side of the Førdefjord. There was a boat stop and a post office, and at Flokenes as well. Vevring Sparebank (savings bank), established in 1904, was located at Hegrenes.

"in great expection"
At a time when there were no mobile telephones, no internet, no radio, and no television, people were informed in other ways. They asked for news when they met, at the steamship quay, at the shop, at school, at church (there were announcements from the church entrance), and by post (letters and newspapers).

Throughout the year 1905 people everywhere were waiting for news about "the situation", i. e. about the union between Norway and Sweden, about the development in the so-called consulate issue that spring, about the dissolution of the union on 7 June, about the referendum on 13 August, about the negotiation in Karlstad, the question of monarchy or republic, and the new royal family in late November and into December. 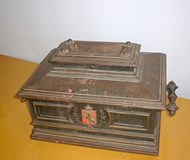 A man from Underdal in Aurland wrote a letter to a newspaper describing what it had been like in his neighbourhood: "About the general opinion in our work for freedom, about the same can be reported from here as from various other places in the country. The people here are in a collective excitement waiting for reports about "the situation". They are well informed about what has happened, and there have been newspapers in abundance, big and small, conservative and liberal."
A man at Fresvik wrote in a letter to America that people more than once were standing "in great expectation down at the steamship stop, every time the steamship was expected to bring post to the community."

Other issues and events besides the dissolution of the union
The dissolution of the union was the all-important issue throughout all of 1905, yet there were other issues also which interested people. The newspapers reported regularly on small and big events from around the county, from other places in the country and the world, in short notes and more comprehensive articles.
At Høyvik, they in October of this year caught 2000 mackerel of high quality in one catch. Some was sold as fresh food for 25-30 "øre" per fish, but most of it was salted for later use. More attention was paid to the exhibition of sheep and goats at Askvoll on 6 October. In January 1905, people talked about the terrible avalanche at Loen, in the night of 16 January, when more than 60 people lost their lives.

Examples of issues before the municipal council were: extension of the road Askvoll church - Nyborg, new schoolhouse in Høyvik district, purchase of book cabinet and books for the Askvoll public library, telephone connection Askvoll - Bulandet, and a new steeple for the Askvoll church (see minutes index for Askvoll.) 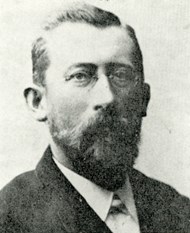 Some important individuals
Election for the municipal council took place in 1904, and Ole Sjurson Nordeide was elected mayor. He had been mayor since 1880. Karl Andreas Breyholtz was vicar and Reinhard Jørgenson Steen bailiff.

17 May 1905
Larger crowds than usual took part in the 17 May celebrations in 1905, which this year was on a Wednesday. The newspaper Fjordenes Blad on 24 May had a report about the Constitution Day at Askvoll. There was a church service, a public procession, and a party at the house of "Anders Askvold (Bøen) and daughter Elisa", who had offered their house for use in the 17 May celebration. The procession looked beautiful with three large flags, many children with flags, and quite a few women in national costumes.

At Atløy, people took part in the procession, and later there was a celebration at the schoolhouse at Leirvåg, where the parish clerk Jens Askvold and the editor David Leervaag and others spoke.

7 June 1905
7 June 1905, the day the union with Sweden was dissolved, was a Wednesday and an ordinary working day. As the news came out, people hoisted their flags, and in some places they sent telegrams of greetings to the authorities. The Storting issued an announcement about the dissolution of the union. The church ministry asked the vicars to read the announcement in the churches on Whitsunday, 11 June, or later.
The vicar Breyholdtz read the announcement from the pulpit in the church at Askvoll on Sunday 25 June. The congregation was standing, and then they sang "Vår Gud han er så fast ei borg. (our God is a reliable castle)"

Both referendums were carried out in accordance with the rules for elections to the Storting (parliament) and supervised by local election committees. The Askvoll constituency corresponded with the municipality of Askvoll at the time. Holmedal parish belonged to Ytre Holmedal (Fjaler) election district. The election committee consisted of the bailiff R.J. Steen (chairman), and the aldermen: the mayor O.S. Nordeide, the vicar Breyholtz, the sergeant H. Follevaag, and the farmers Mathias K. Stubseid, Johannes E. Vilnæs, and Jakob M. Einen.

In both referendums there was one polling station, in the Askvoll church.
In Holmedal parish they voted in the Holmedal church. The votes there were taken to Dale and counted with the other votes from that election district.

The referendum in August - yes or no to the dissolution of the union
The result in the Askvoll election district: of 581 who had the right to vote, 512 votes were cast. The turnout was thus 88.1%. All voted yes.
In the county of Sogn og Fjordane the turnout was 88.7%, and three voted no.
Numbers from Holmedal election district are not available. 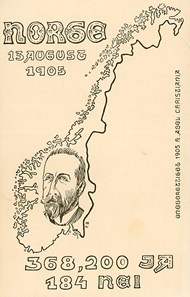 The polling
A note in the newspaper Fjordenes Blad on 12 August reports that in the period before the referendum people were busy getting their hay into the barns, and that the weather was unstable. Interest in the coming referendum was considerable, and since the Fylkesbaatane (steamship company) had changed its schedules, a high turnout was expected.
The interest in the result was equally great, and if there would be "no" votes. "They did not come!", was the exclamation in a newspaper note signed "M.G." afterwards.

A recollection of the polling at Holmedal
In 1955 - fifty years after - Erling Vindheim gave an account of a childhood recollection from the day of the referendum at Holmedal. He remembered two men in particular. About one of them, Jens Engebø, he said:
"He arrived with a big plaited garland of heather formed as a Yes and put it on the wall near the pulpit. From that moment on, Jens Engebø became "my" man - and has been ever since. I cannot read or think about 1905, indeed, I cannot think of the Holmedal church - and I do quite often - without Jens Engebø appearing on this remarkable day."

Private petition by women
Women did not have the suffrage in 1905. But the women wanted to say their yes along with the men. Several women's organizations joined forces in a countrywide petition, and on 22 August they handed over more than 250,000 signatures to the Storting.

The collection of signatures was organized in different ways, such as placing lists in newspaper offices. At Leikanger the women signed on lists in the vestry during the service before the referendum.
There is no information about the women petition at Askvoll.

The referendum in November - monarchy or republic
The Storting (parliament) decided on 31 October to have a referendum on whether the Storting should choose Prince Carl of Denmark King of Norway. In reality this would be a choice of government, monarchy or republic.
In Fjaler (Ytre Holmedal) people were interested in this question long before. On 22 October, a popular meeting at Holmedal sent a telegram to the Storting with the following petition:

"To the Storting. Popular meeting yesterday at Holmedal declared: For a safe and calm future development, and with right as an autonomous people, we expect that the people are asked, by referendum or by election beforehand, before a decision is made on monarchy or republic."
The telegram was signed by Bakke, Helgerud, and Skarstein.

David O. Bakke - towering Republican at Holmedal
Fjaler (Ytre Holmedal) had a higher percentage of votes for republic than Askvoll, 25.1% compared to 19.6%. This difference is puzzling. Some of the explanation can probably be found in the fact that the earlier Liberal member of the Storting D.O. Bakke lived at Holmedal. He was very active in the campaign before the referendum. He participated in the popular meeting and wrote articles in several newspapers.

The new royal family
On 18 November, the Storting chose Prince Carl of Denmark King of Norway. He was married to Princess Maud of England, and their son's name was Alexander. Prince Carl took the name Haakon VII, and Alexander's name was changed to Olav. The new royal family arrived in Kristiania (Oslo) on the Norwegian navy vessel "Heimdal" in the evening of 25 November, and thousands of enthusiastic people had come to receive them. 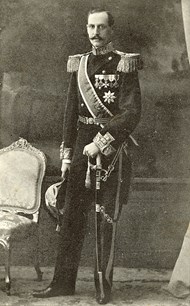 At Askvoll the arrival of the King was celebrated with flags and fired salute. The steamships "Alden" and "Stavenes" - which on this day stopped at Askvoll - flew their flags and greeted with fired salutes. On Sunday 26 November, salutes were fired at several places at Askvoll for Queen Maud's birthday.

Thanksgiving church service on 7 December
On Thursday 7 December 1905 - half a year after the 7 June decision - thanksgiving church services were held around the country.
At Askvoll there were services at the Askvoll church and at Holmedal, at Holmedal the pastor Landmark officiated. Little is known about the services, but the Church Ministry in a circular ordered Psalm 118, 23-26 to be the text for the day, and Blix's national hymn "Gud signe vårt dyre fedreland "(may God bless our precious nation) was recommended.

Psalm 118, 23-24:
This is the LORD's doing;
it is marvellous in our eyes.
This is the day which the LORD hath made;
we will rejoice and be glad in it!

In 1905 and 1906, many postcards were made with motifs from the important events in connection with the dissolution of the union.

Note in the newspaper Søndfjords Avis about the telegram sent to the Storting by the popular meeting at Holmedal. In 1905, there were two local newspapers at Florø: Søndfjords Avis and Nordre Bergenhus Amtstidende.