Haukedalen church is a basilica church in wood located at the farm of Gjerland in Haukedalen in Førde Municipality. The church, which accommodates 120 people, was consecrated on 8 July, 1885 by the dean Christopher Johannes Hammer. The architect Hartvig Sverdrup Eckhoff designed it. Haukedalen church and Holsen church are "sokn" (sub-parish) churches for Holsen and Haukedalen "sokn" of Førde parish. 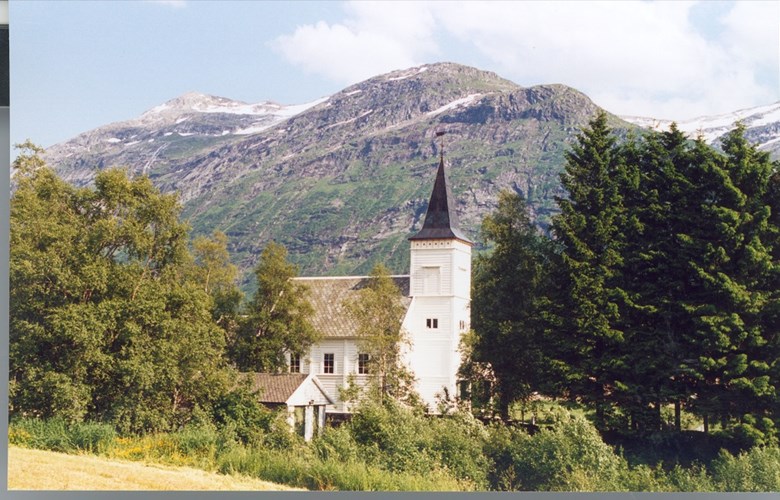 Distant from the centre

Haukedalen church is located 300 metres above sea level, only the Borgund churches in the municipality of Lærdal are higher. Haukedalen is the church located farthest from the sea in the county of Sogn og Fjordane, 42 kilometres from the head of the fjord, in the municipal centre of Førde. But the community of Haukedalen is on the high ground of the Gaular watercourse, and it is geographically more closely connected to the municipality of Gaular. The distance to Osen at the head of Dalsfjorden is 56 kilometres, and the Haukedalen people have always belonged to Førde, even if they on their way to Førde have to cross the 543-metre-high pass of Rørvikfjellet. Haukedalen is in the geographical centre of the county of Sogn og Fjordane and is thus both distant and central in location. 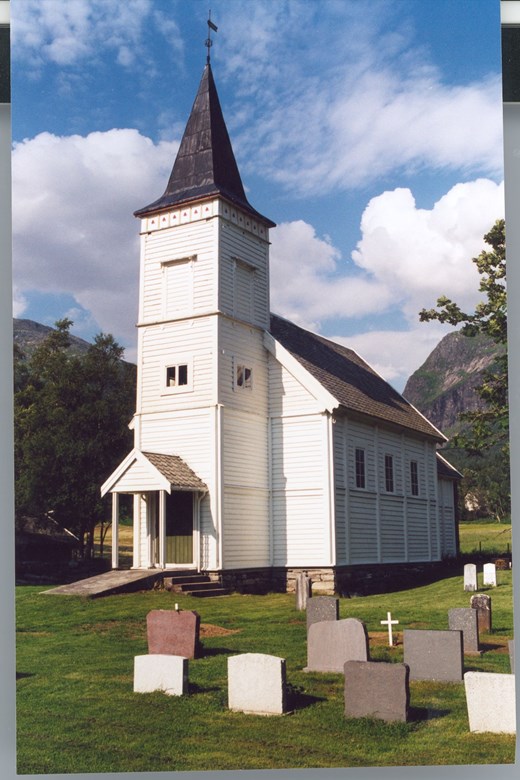 Large quantities of snow have stopped a good many church travellers across the mountain pass, and at a place called Likhillaren people used to leave the coffin, if darkness or bad weather set in, when they were on their way to the "sokn" church at Holsen. Toward the end of the 17th century they at long last had their own church. It was built close to the lake Haukedalsvatnet. Up to 1859 the Førde vicar came to Haukedalen only twice a year, around midsummer and on Michaelmas, 29 September. Funerals were taken care of by the people in the community. It was practice to "sing out" the dead body at the home, then the coffin was buried at the churchyard. The ritual had to wait until the next church service. The midsummer mass tradition is special, and it is something Haukedalen shares with other hill valleys, f. ex. Guddalen. The midsummer mass is even today a day of celebration for people in the community. Since 1886 Haukedalen has had a church service about once a month.

The Haukedalen church of today was built in 1884 and consecrated the year after, the same year in which the Førde church was finished. As was the case with the old church, the people in the valley covered all the expenses, which amounted to NOK 5765.06. It is a basilica church in timber framework, painted white, with the steeple above the porch to the west. The nave is 9.5 by 7 metres, the chancel 5.5 by 4.5 metres. A vestry was built to the east in the 1950s. Then the church was also insulated, electric lighting and heating were installed, and the interior was renovated with new panelling and new seats. In the olden days people sat according to their rank in the church, the people from the largest farms on the front benches, but this was changed for the 75-year anniversary in 1960.

In 1984, a new chapel of rest was built with a room for equipment, plumbing was installed, and for the centenary anniversary the year after, the interior of the church was painted. In this connection the gallery was extended to measure the whole width of the nave. A new organ was installed in 1985.

A good many people in Haukedalen were opposed to having an organ in the church, the reason being that the community has a strong tradition of polyphonic singing during the services. The community has since 1874 had many choirs, and many parsons have made positive comments about the beautiful singing in the church.

The altarpiece from 1962 is made as a triptych, but the doors are without pictures or any other decoration. In the middle there is a painting of Christ on the cross, and three female worshippers, probably Mary, Christ's mother, Mary Magdalene, and Salome. The inscription on the cross is in Latin and is in translation: "Jesus from Nazareth, King of the Jews". In the middle of the picture, words from the Scriptures are painted which interpret the picture: "Behold the Lamb of God which Taketh away the sin of the world" (from John 1,29), and "In Truth He Bore our Illness And Took Our Pain" (from Jes. 53,4). The artist is not known, but the inscription below identifies the donors: "Jesu Tienere oc Tienerinde Fendrich Offu Christianson og Dyd Ædle Barbro Danniels Datter Bugge 1692 (the servants of Christ lieutenant Offu Christianson and the virtuous honourable Barbro Danniel's Daughter Bugge 1962)". 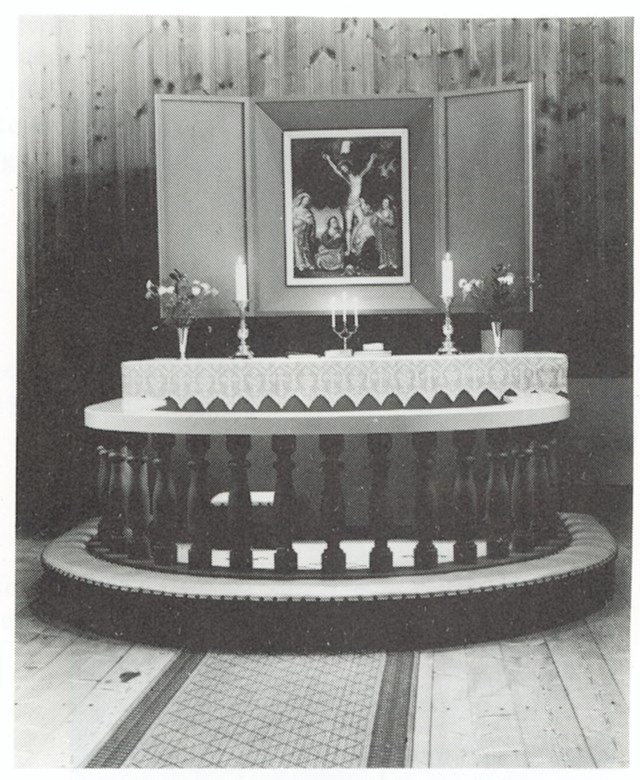 The relationship between this altarpiece and the one from 1673, now at the Sunnfjord Museum, is unclear. The altarpiece from 1673 is believed to have been in the church until 1884, but an inventory from 1703 says that "1 Picture on the altar donated by Owe Christian". In the new church a cross in wood was placed on the altar for the time being, and only around 1960 today's altarpiece was installed.

On the altar are two candlesticks in brass and a small three-branched candelabra in silver. The altar set consists of a chalice, a paten, and a wine flagon , all in silver, and a pyx from 1963. The pulpit as well as the font are in wood dating back to 1885. With the font is an undated brass baptismal bowl, a holy water ewer, and a mug. There is also a Bible from 1738 and a wine barrel , most likely for communion wine, with 1754 carved into it..

The organ from 1985 has four registers, built by Jehmlich Orgelbau in Dresden. The church bell has the inscription: "Støpt i Bergen av J. T. Becker 1851(moulded in Bergen by J. T. Becker 1851)." It is actually a remoulding. The legend has it that a poor woman who was called Myra-Synnøve (Synnøve from the marsh), who had been in gaol, said: "When I am buried, they will toll so hard that it splits." And so it happened when she died in 1848. The bell most likely dates back to the oldest church in the 1600s.

The altarpiece from 1673 was painted by the local artist Christen Kjelstad in 1794. It belonged to the old church at Gjerland which was torn down in 1884. It is now in the custody of Sunnfjord Museum.
Owner: Førde kyrkjekontor. - Date: 2001. - Photographer: Jon Baxendale.
Førde kyrkjekontor.
2001.
Jon Baxendale.

In February, 1928, the snow forced its way through one of the doors of Haukedalen church. There had been black frost for some time, before a heavy snowfall in January. When the temperature rose in February, the avalanche came and swept through a field of new plants and a lot of forest. The trunk of a tree knocked in the door behind the chancel, and proceeded into the altar. This happened before the vestry was built. The avalanche had such speed that it filled the altar rail and shot its way through the church up to the entrance. Books, a surplice, and a chasuble were retrieved from the snowdrifts.
Owner: I <i>Haukedalen kyrkje 1885 - 100 år - 1895.</i> - Date: 1928. - Photographer: Herman Andersen Ness.
I <i>Haukedalen kyrkje 1885 - 100 år - 1895.</i>
1928.
Herman Andersen Ness.