From riding path to road - between Kaupanger and Sogndal

Kaupanger has always been an important historical place in Sogn. There is a reference to the place in the saga literature and it has been used as a market place, a church site, a court site, and as residences for bailiffs and county governors. The contact with the outside world took place by means of boats, but there was also a road connection between Kaupanger and Sogndal. In earlier times, this was hardly more than a good riding path. In 1848, the standard of the path was improved to a cart road, and, in 1938, a car road was built to connect with a ferry at Kaupanger. The ferry quay in the bay of Amlabukta was for a long time one of the busiest in the county. 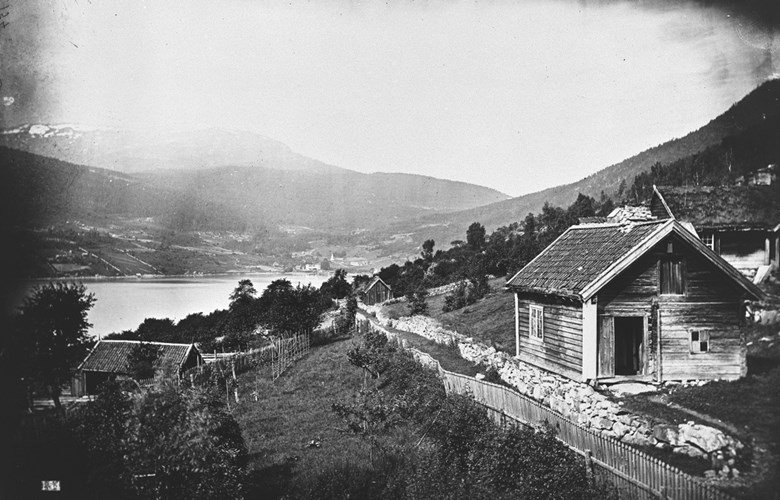 The picture dates from 1880 and shows the old cart road built in 1848. The picture is taken from upper Amla towards the Kaupanger estate and the stave church in the centre of the picture. The houses on the picture are located where the first buildings of the Sogn Folkemuseum were put up about 1900.

The old riding path went from Loftesnes by way of Kjørnes to Amla. It was natural to build a road there, as it was much faster than going by boat from Sogndal. There are different references to this road in historical sources. Kaupanger was many times a battleground in the struggle for power between King Sverre's supporters - also known as "birkebeiners" - and his opponents - called "baglers". King Sverre and his men were in Kaupanger on many occasions to secure his power and suppress the opposition.

The first riding path passed through the farmyard at Kjørnes, then through the hamlet of Vestrheim across Kaupangerskogen down to Amla (16 kilometres). Bishop J. Neuman was on a visitation to Kaupanger in 1823, but when the horses did not arrive at the agreed time, he started to walk the long road back to Loftesnes, accompanied by the dean Qvale and the vicar Friis. It was indeed a long walk for the bishop who was not used to travelling on foot. The bishop said afterwards: "We walked uphill for a long and tiring while. Then an even stretch of road through a forest, and, eventually, down a very long and steep hill to the fjord."

In 1848, the path was rebuilt and improved to a cart road standard, as was the case with many other much-used riding paths, such as the roads along the Lærdal valley, the road between Hafslo and Sogndal up the so-called "Gildreskreden", and the road to Solvorn. The municipal authorities wanted these roads to be classified as main roads, but the county road committee was of the opinion that the people of Luster, Hafslo or Lærdal would never use these roads. They maintained that the sea route was a much more convenient and accessible alternative, and travellers would prefer to go by way of Solvorn rather than Amla. Besides, it would be too expensive.

Increased car traffic and a different road pattern changed the view of people concerning the road connection across Kaupangerskogen. With a ferry from Kaupanger, the distance to Lærdal was very short, and the road network in the Inner Sogn area could be linked to the road across the mountains to eastern Norway. In 1933, Sogndal applied to get the road between Sogndal and Kaupanger built with an extra allocation, which the county council road committee endorsed. The road plan was then included in the so-called compensation plan for the railway in 1936, with the argument that the road would be an important part of the traffic by way of Flåm. With the exception of the road between Vadheim and Sandane, this was the first of the roads to be included in the compensation plan.

Work on the road between Sogndal and Amla started just before Christmas in 1936, and in April 1937, the workforce counted 100 men. They were divided into five work groups with 30 men, three groups from Sogndal, one from Årdal, and one from Hafslo. From Kjørnes to Hovland a new road line was built. The roadwork on the section across Kaupangerskogen went much faster than expected, and in early June 1938, the approx. ten-kilometre-long road was opened for traffic. 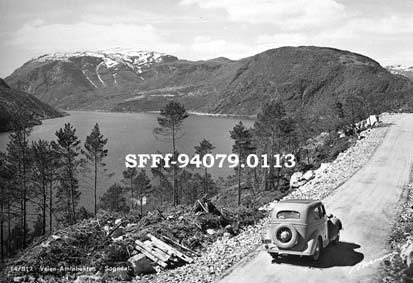 Disagreement concerning location of ferry quay in the bay of Amlabukta 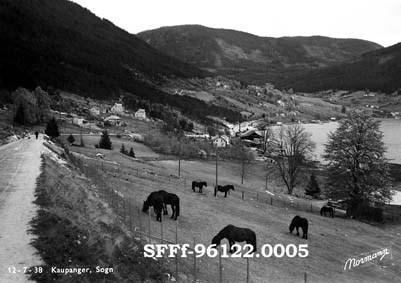 With the new road, obtaining a highway status in 1941, the whole area between Skjolden and Leikanger could be connected to Flåm by boat from Amla. The ferry connection turned out to be the most important one in the whole county, and played an important part for the tourist industry, too. Ferries called at Amla from Lærdal, Gudvangen, Flåm and Årdal. The road and the ferry connection also became an important link in the connection between Sogn and Sunnfjord across the Gaularfjell mountain pass.

In the summer of 1938, the steamship company Fylkesbaatane rented a motorboat, "Vesle Øyvind", to operate the Lærdal-Kaupanger connection, but there was only room for four cars on deck, and buses and bigger lorries could not be transported. Nevertheless, the boat transported 995 cars in the course of the summer months. The service was planned to terminate on 30 September, but the connection was kept throughout the winter. In 1938, the car traffic increased dramatically, and the company had to get hold of two new ferries to deal with the increased traffic. 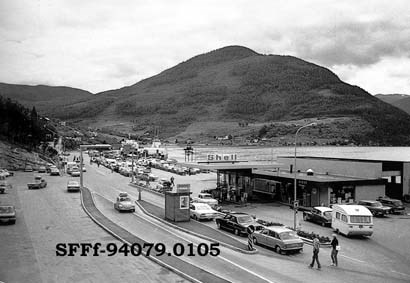 No longer rowboats across the fjord.

In order to get to Sogndal, people had always had to be rowed across the strait of Loftesnessundet. A bridge was therefore included in the road plans. When the new road came, a cable-drawn ferry was temporarily used. This ferry could transport a bus or four-five private cars, and it crossed the strait only when a bus or several cars were lined up on one side. Only in 1946 was a regular schedule introduced. The bridge was completed in 1958, and for the first time it was possible to drive between Kaupanger and Sogndal without having to use a ferry.

This postcard from 1938 is taken from Drogi and we can see the village of Fardal in the distance. The car on the new road between Kaupanger and Sogndal belongs to the photographer Normann.
Owner: Ivar Falck Husum. - Date: 1938. - Photographer: Normann.
Ivar Falck Husum.
1938.
Normann.

The new road down to the bay at Kaupanger in 1938. It was now possible to go by car between Kaupanger and the centre of Sogndal called Sogndalsfjøra. In the centre of the picture, you can see the house for the retired people on the Kaupanger estate, owned by the Knagenhjelm family. We can see the sawmill down by the quay, also stacks of timber. The ferry quay is located behind the sawmill. It was the vast pine forests in the area that formed the basis for the prosperity of the Kaupanger estate, with an extensive timber trade dating back to the 17th century.
Owner: Christen Knagenhjelm. - Date: 1938. - Photographer: Ukjend.
Christen Knagenhjelm.
1938.
Ukjend.

The ferry quay at Kaupanger was the busiest in the county until 1995, when it was replaced by the new connection between Fodnes and Mannhiller. In 1970, two ferry quays were built because of the increased traffic.
Owner: Ivar Falck Husum - Date: 1976 - Photographer: Sviggum
Ivar Falck Husum
1976
Sviggum

This picture shows two communication generations. In the background, the Loftesnes bridge is being built to be opened in 1958. In the foreground is the ferry that was used to transport cars across the strait. Bernt Pedersen was pilot on the ferry.
Owner: Magnar Flåten - Date: 1955-58 - Photographer: Ukjend
Magnar Flåten
1955-58
Ukjend

Kaupanger bridge under construction about 1924. In 1924, the old road was rebuilt to the west of the stave church, and a new bridge had to be built. The workers in the picture are: Johan Nyset, Kristin Nondal, Anders Fredheim, Johannes K. Nondal.
Owner: Statens vegvesen Region Vest. - Date: Ukjend. - Photographer: Ukjend.
Statens vegvesen Region Vest.
Ukjend.
Ukjend.