Randabygd church is a wooden longchurch situated a short distance up from the quay in the village of Randabygda. The church has a seating capacity of 240, and was consecrated on 29 August, 1916, by the bishop Peter Hognestad. The architect Jens Sølvberg from Bryggja in Nordfjord made the designs. For along time the church only had a status as a chapel under Utvik ¿sokn" in the Innvik parish, and from 1967 under Hornindal. However, since 1 January, 1981, the church has served as a ¿sokn" church for the Randabygd ¿sokn" in Hornindal parish. 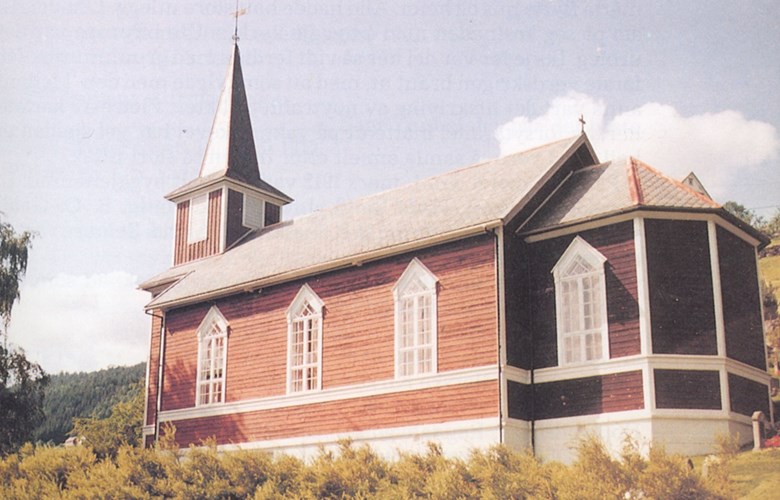 The brown-stained Randabygd church has an especially tall appearance because the basement has been built above ground.

The wish to have their own church

A church at Randabygda had been a dream for many people long before it was built. They dreamed of being able to congregate on their side of the fjord where they belonged, thus avoiding the frequently strenuous crossings to the church at Utvik, or to Gloppen for the farms at Hopland which belonged to Vereide church.

They kept on dreaming, but most people realized that the most realistic alternative was to move the Utvik church to Tistam, about 7 kilometres further west in the fjord. At any rate they thought this would be a better solution because it would mean a shorter crossing to Tistam. This demand was put forward on many occasions, but it was always turned down. The last time this issue was raised, was in the late 19th century when the Utvik church needed major repair work. The people at Tistam were supported by people both from Randabygda and Fjelli in their demand to move the church to Tistam. However, the discussion ended as always when their suggestion was turned down. Nevertheless, the discussion led to an important decision when Randabygda was promised to get its own auxiliary graveyard. It took some years, but in 1910, the graveyard was eventually consecrated.

At that time a group from the Randabygda congregation had started planning a chapel at their own expense. An important part of this work was to raise money, and after three years of various, regular fund-raising activities, they had already been able to raise enough money and were promised enough financial support for a total of 3000 kroner. 30 persons from Randabygda guaranteed for the remaining sum needed for the completion of the project..
In 1915, the construction work was started, and 18 months later, the Randabygd chapel was finished.

Chapel in a steep terrain

There are few flat areas available at Randabygda as the terrain is mainly very steep. The church site is a terrace with only a few metres¿ width on the south side. North of the church is the graveyard, which must surely be the steepest in the county. It is divided into three walled terraces. Because of the difficult terrain, it is practically impossible for one man alone to prepare the graves. For this reason, the congregation has kept the old tradition that the neighbours of the deceased take part in digging the grave. In spite of the steep terrain, the church has a fine location a short distance up from the quay and the shop, with a commanding view of the Nordfjord. 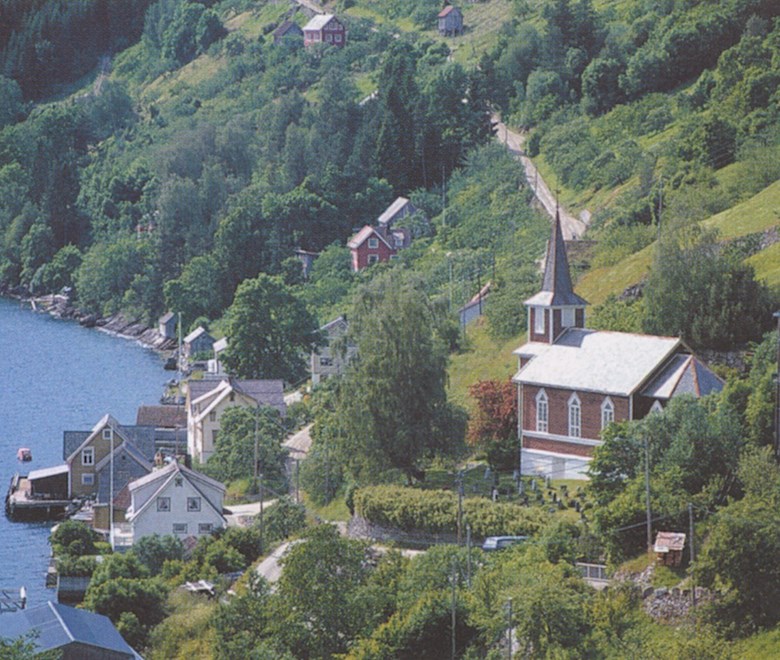 The term chapel followed this house of God up until 1981, when Randabygda was established as a ¿sokn" of its own. After the parish border adjustments in 1967, the church and its congregation became part of Hornindal parish, but the people and the church building still belong to the municipality of Stryn.
The border adjustment took place in the same year as electrical heating was installed in the church. At the same time, parts of the basement were dug out to make room for toilet facilities, a mortuary room, and a storage room for tools. In 1998, a separate mortuary room was built close to the church itself.

Randabygd church is a traditional longchurch, but with a chancel in the east end having five of the sides of the symbolic octagon. On the north side there is a vestry used both by the vicar and also for baptismal purposes. The turret base in the west end is a porch with staircases on either side. The steeple is built with a square turret neck and a slate-covered spire. The church was originally tarred, but has later been treated with brown stain. Casings and corner boards are painted white.

When the church was to be consecrated, many people pointed out the unusually strong colour scheme. The walls in the nave were painted yellow, the chancel walls were dark red, the ceilings sky blue, and elsewhere in the interior green, white and orange were used. On pictures from that time we can also discern a bluish violet on the wainscoting. The artist Ferdinand Kjerulf Tranaas chose the colour scheme. The same person was also responsible for the altar painting. When the church was to be repainted in 1970, much more subdued and lighter shades of green and grey were chosen. No other changes to the interior were made. The gallery is spacious and has a whole front with similar fields as those found on the pulpit. The gallery is supported by four columns. On both sides of the nave there are three pointed-arch windows, and the window furthest back also provides light for the gallery. In the chancel there is a window only on the south wall. 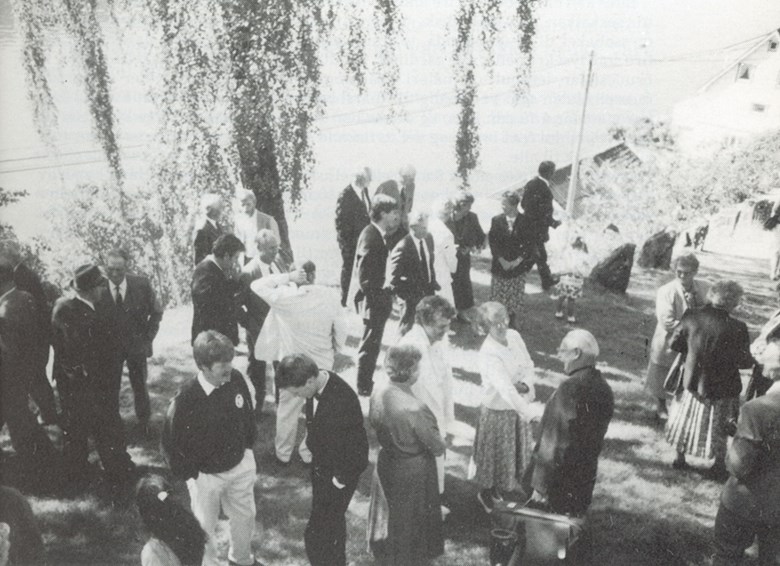 Both the pulpit and the font are of the same age as the church itself. The same thing applies to one of the baptismal bowls and the silver holy water ewer. The other baptismal bowl dates from 2000, and the other holy water ewer is undated. The Holy Communion set consists of a chalice, a paten, and a pyx, all undated. 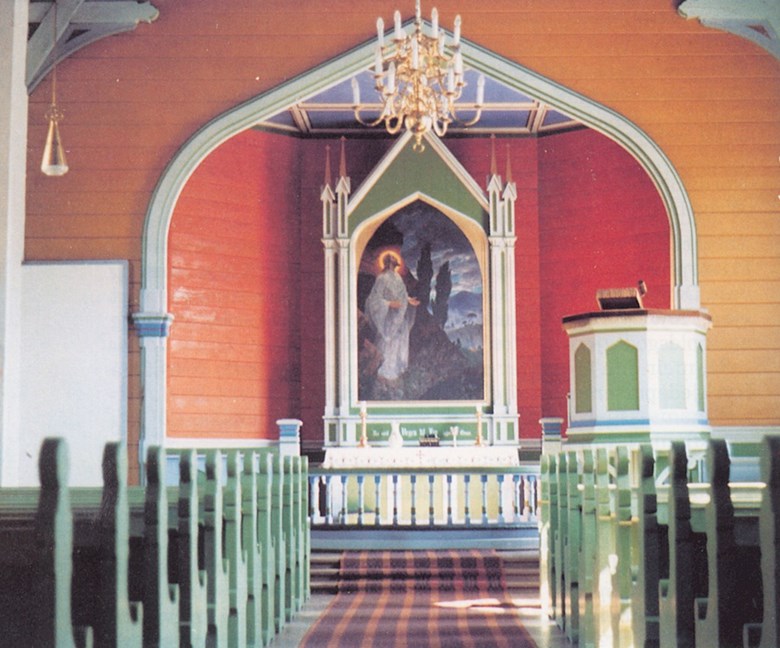 The organ dates from 1929 and has seven registers. The organ was financed by a will to the church. The church bell dates from 1916.

The colour scheme in the chancel is still identical to the original. The altarpiece from 1916 is painted by Ferdinand Kjerulf Tranaas. The painting depicts Jesus leaving the grave, looking towards to the sky. Beneath is the inscription: 'Now I know the way to life through the grave' which is a line from a hymn by Blix. The vicar Prytz in Gloppen is said to have been the model for the artist.
Owner: I <i>Årbok for Nordfjord 1992.</i> - Date: 1992. - Photographer: Matias Djuvstein.
I <i>Årbok for Nordfjord 1992.</i>
1992.
Matias Djuvstein.

On the altar there are four candlesticks in all, two made of brass from 1916, and two undated ones in silver. Like the other churches in the parish, Randabygd church got new chasubles in the 1990s. The motif on this purple chasuble shows the cross and the crown of thorns, inspired by a detail on the chalice. Three thistles at the foot of the cross symbolize the three nails. The chasuble is designed by Magne V. Kristiansen and made by Magnhild Blakset.
Owner: I <i>Årbok for Nordfjord 1992.</i> - Date: 1991. - Photographer: Olaug Hellevang.
I <i>Årbok for Nordfjord 1992.</i>
1991.
Olaug Hellevang.