Bryggja is located on the northern shore of the Nordfjord, just to the east of the entrance to the fjord. The place was separated from the farm Runnshaug in 1838. From days of old, Bryggja has had road connection to Vanylven across the strip of land called Maurstadeidet, and to Selje through the valley of Rimstaddalen and across Berstadeidet. Bryggja has a good harbour, well sheltered by the islands and islets to the west. The place used to belong to the municipality of Davik, but was transferred to Vågsøy by the municipal boundaries regulations in 1964. 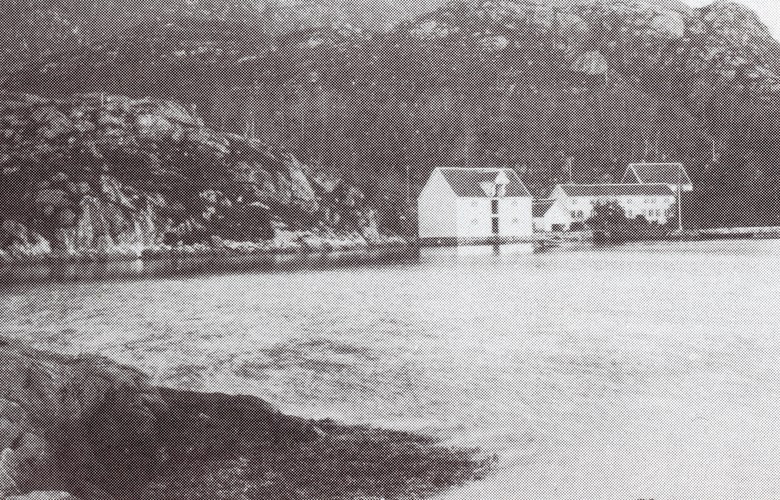 From the 17th century onwards, Bryggja was one of the most important trading posts in Nordfjord. The picture shows the place before the fire in 1898. The big residence burned down along with some other buildings.

Trading in the 17th century

The first citizens settled down at Bryggja in the 1600s. About 1640, the place got a trading privilege. There is a reference to Ola Jacobsen in 1682, and he was allegedly the first person to carry out trade there. There are also references to Peder Johnsen and Jens Paulsen. From 1706 Hans Bang had a trade privilege. At the same time he was also a manager of the land properties belonging to Sankt Jørgens Hospital in Bergen. Three years later, Bang sold the place to Hans Larsen Glad. Both Bang, Glad and the other owners throughout the 18th century enjoyed a trade monopoly at Davik and Hyen.

In 1757, when Niels Pedersen Tonning owned Bryggja, the bailiff wrote a report on the place. He wrote that the place is indispensable for travellers and the general public. In addition to having a trading centre and an inn, it also served as a posting station. According to the bailiff, the place had an excellent harbour.

Hans Nielsen Tonning took over Bryggja after his father in 1771. At the same time, he owned half of the churches in the parish of Selje. In 1801, Hans Tonning lived there with his wife, their four children, three servants, his mother and brother, and an "elderly, weak girl". The servants helped in the running of the trading post. Erik Nord, member of Parliament in 1814 and 1833 took over Bryggja after Tonning. In 1841, a sub-post office was established there. Lauritz Elstrand took over the trading post and the inn in 1846. The same year, the municipal council refused to give the inn a licence to sell liquor, but changed their minds the following year. In addition to being a tradesman and an innkeeper, Elstrand was also a sub-post office manager, and when the steamer began regular stops at Bryggja, he became a shipping agent as well.

In the 1850s, Bryggja was a regular stop for the steamers between Bergen and Trondheim. The place became an important communication junction for the traffic across to the southern part of Sunnmøre. Fylkesbaatane included Bryggja as a regular stop from 1858, even if there was no quay there. In 1858, Lauritz Elstrand and Lars Eide sent a letter to the authorities about building a road across the strip of land called Berstadeidet. Stortinget (the Norwegian Parliament) resolved to build a road between Bryggja and Åheim in Sunnmøre, which meant that it was not necessary to use the weather-exposed waters around Stad by boat. In 1863, the road across Maurstadeidet was completed, but no means were allocated to build a quay. The quay must have been built shortly after 1886. In 1907, the quay is referred to as falling to pieces.

Lauritz Elstrand ran Bryggja until 1887. In 1865, he lived there with his wife, Amalie, their four children, six servants, and a private tutor from Bergen. In addition, the road administrator H. H. Rosenquist lived there with his wife and three children, and two servants. In 1887, Henrik Elstrand took over the operation after his father. On 23 October 1898, the main residence and some other buildings burned down. After the fire a new residence was built in the so-called Swiss style.
In 1900, Elstrand ran a sub-post office and a fishmonger's shop at Bryggja. Besides, a lawyer and a private doctor also lived there with their families. When Elstrand in 1909 sold Bryggja and moved to Ytre Nore, he took the post office with him. Bryggja was sold to Per Gjesdal. Reidar Gjesdal sold the house and the garden to the veterinary surgeon Asgaut Bleie. In this building the Davik municipality established an old people's home.

On account of the fire in 1898, very little remains of the buildings at this old trading post. After the fire only a boathouse, a sea warehouse and a servants' cottage remained. The big, two-storeyed sea warehouse was later moved. The Swiss-style residence built after the fire was for a while used as an old people's home, but has now been torn down.

In the first decades of the 20th century, various business activities have been carried out at Bryggja. In 1924, Bernhard Tunold established a bakery in rented facilities. Later on, the business also included the sale of groceries. "Alv Aalen Ass. Landhandel" (general store) was established in 1926. The business has included the sale of flour, groceries, shoes, crockery, clothes, haberdashery, hardware, paint, cement and other building material. In addition, there has been a petrol station. Another general store was established in 1930: "Johan Lothe Ass. Landhandel". In 1942, Ola Kassen started the production of wooden soles for clogs and boots. There was also a garage and a mechanical shop called "M. Krikens mek. verksted".

Many of the activities that were established in the early and mid 20th century are still in operation in the year 2000, and new ones have been added. After the Second World War, Bryggja was included in the timetables of the services carried out by the local steamship company between Nordfjord and Bergen, but was gradually phased out due to reduced traffic, and Bryggja is no longer a regular stop. On the other hand, the place has benefited from being located along the main communication artery in Nordfjord - highway RV 15. The road along the north side of the fjord and the connection north to Sunnmøre are of most importance, not the boat traffic on the fjord.
Bryggja has become a small local community with some institutions such as old people's home, school, and kindergarten, and a bank branch office.