Hydroelectric power and industry at Svelgen

In Bremanger the water resources formed the basis for the development of the industrial town of Svelgen. It took some time before any establishment of industry that could utilize the power, and it was only from the 1950s that Svelgen emerged as a major industrial site, with the company Elkem Bremanger as its dominating workplace. After the municipal boundary regulations in 1963, Svelgen became the administrative centre for the new Bremanger municipality. 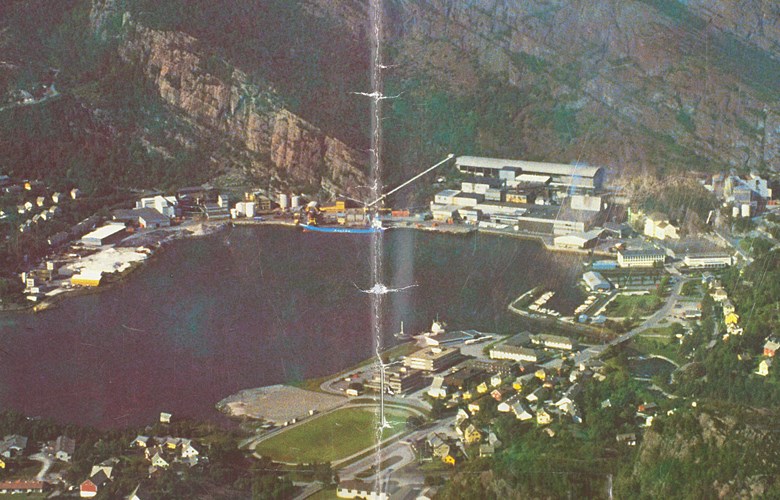 The industrial town of Svelgen in the municipality of Bremanger is located at the head of the Nordgulen fjord. There we find the company Elkem Bremanger which produces silicon and ferrosilicon.

The Svelgen watercourse was ideal for hydroelectric development. It was easy to dam the reservoirs, and the waterfalls fell directly into the fjord. The first purchase in the watercourse was made in 1906. A/S Bremanger Kraftselskab (power company) was established in 1914. A key person among the non-local owners was the attorney Kristian Faye, who beforehand had been working to secure the water rights in the Svelgen watercourse.
The power company got concession to develop the watercourse in 1915, and the construction work started in 1917. At that time there were six farms at Svelgen, two at Sande and four at Rise. During the first couple of years, there were built barracks, storage houses, and cable cars up to the construction sites in the mountains. Roads and bridges were built, and a number of new houses were built for the company, families at Øyna and engineers. A makeshift power station provided enough electricity to cover the local demand from May 1918. The same year the first tunnel work was started at the power development, and this was a new type of work in these parts of the country. In 1921, Bremanger Kraftselskab completed its hydroelectric development.

The hydroelectric power at Svelgen was originally meant to be utilized for industrial purposes, but it took a long time before any industry was established. The crisis after the First World War (1914-1918) hampered to industrial development at Svelgen. Instead, the power was delivered to the Ålfotselskapet company, but this was not profitable enough. Bremanger Kraftselskap suffered from a bad economy, and was taken over by Bergens Privatbank, after a pig-iron plant had been planned at Svelgen by Christiania Spigerverk. The melting of iron started up in 1928. The Spigerverket company pulled out of Svelgen in 1933, and it was only later that the production at the plant became profitable. In 1936, there were 166 employees at the plant. In 1955, Christiania Spigerverk took over the power company and the iron plant which was called Bremanger Smelteverk.

Local power and pig iron from Rausand in Romsdal formed the basis for the melting plant. This was extended and new products were added. A new pig-iron furnace was completed in 1958, and the new facility was opened in 1959. In 1956, a new product was launched with the production of ferrosilicon (FeSi). In 1963, a new ferrosilicon furnace was started up, at that time considered to be the biggest in the world with 15 000 kW. Then the product called silgrain was developed and was put into production in 1964 and extended two years later.
The pig-iron product was also developed, for example the so-called OB iron, a particularly clean iron product. A new smelter became operational in 1971, and the following year, the hydroelectric development of the Norddalsvassdraget watercourse was completed. The production was modernized, and new cleaning facilities reduced the emissions from the plant. In the last couple of decades, ferrosilicon and silicon have been the main products at Elkem Bremanger. The annual production has been about 38 000 tonnes of ferrosilicon and 25 000 tonnes of silicon. Most of the production is exported. The employment has gone down from about 500 in the 1970s and 1980s to about 240-250 in 2001.

The development of an industrial town

In the development period it was the hydroelectric company and later on the plant that were behind many of the development initiatives. In the late 1950s, the municipal authorities came to play a more central role. Svelgen became the municipal administration centre after the regulations of the municipal boundaries in 1963. The industrial town took over after the old centres of Kalvåg and Davik.
The population figures for Svelgen have moved up or down in line with the employment needs of the plant. The population increased from 328 in 1930 to 532 in 1950. The growth accelerated in the 1960s, and passed 1500 in 1970 with a maximum of 1679 in 1980. In the last couple of decades, the population has gone down there as in several other industrial towns, and came under 1200 in 2000.

In the picture we see a work gang about to make a distribution reservoir during the power construction. The crane in the picture was also used during the construction of the quay.
Owner: Fylkesarkivet, SFFf-95064.0458. - Date: 1921. - Photographer: Ragnvald Oliver Riise.
Fylkesarkivet, SFFf-95064.0458.
1921.
Ragnvald Oliver Riise.

Villabakken is one of the oldest housing estates in the industrial town of Svelgen. To the left we can see Villabakken with Ingeniørmessa (The engineers' mess hall) and house #8. To the right we can see the store of Knut Kjelkenes. We can see the point of Naustneset with the school building and further behind is the point of Langeneset. The three houses at Breivika are still there, but the two barracks to the right were torn down in the 1960s.
Owner: Fylkesarkivet, SFFf-95064.0108. - Date: 1925 - 1930. - Photographer: Ukjend.
Fylkesarkivet, SFFf-95064.0108.
1925 - 1930.
Ukjend.
resources:
Nesbø, Sverre: Industriutviklinga i Svelgen.Svelgen, 1978.
Nordstrand, Leiv: "Lys og kraft til bygdenes behov¿" - Kraftforsyninga i Sogn og Fjordane 1893-1993. Sandane, 1993.
Munnleg informasjon frå:
Roar Hatlenes, f. 1946, Bremanger.
Endal, Hans Eirik: Frå sild og fisk til industri. I Jul i Nordfjord, 1973.
Færevaag, Per: Industrien i Bremanger. I Jul i Sunnford, 1963.