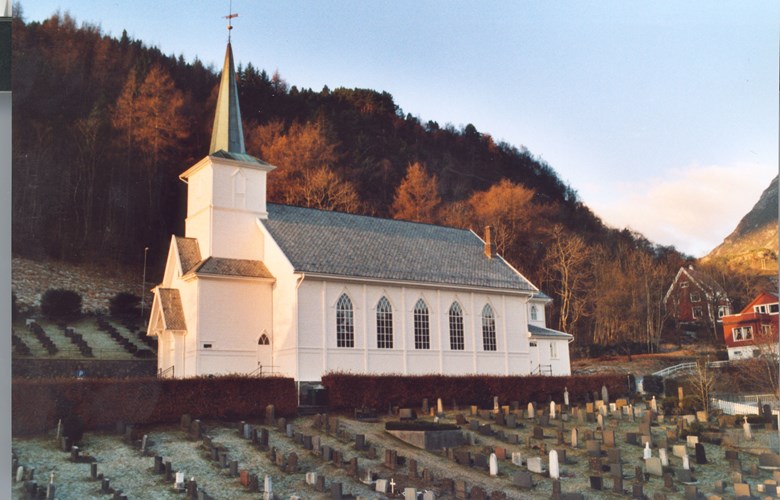 Sør-Vågsøy church has a fine and high location on the point of Sæteneset, one of the few flat areas in Måløy. The church has a commanding view of the fishing harbour, the busy centre activities, and the traffic across the Måløy bridge. Still, church goers are not disturbed by the hectic everyday activities once they enter the church.

It is a nice experience to enter this house of God. The impressive and massive grey columns lining the central aisle give the church a distinctive, monumental look. This character has been accentuated by the architect with the unusually lofty, white-painted slanted ceiling. Strangely enough, Lars Sølvberg is not one of the famous and great Norwegian architects, but a local man from Nordfjord, who had learnt the profession and made excellent designs characterized by fine details. The columns in the Sør-Vågsøy church have capitals and elegant carvings on all sides. Even the hymn boards have a majestic look, shaped like two windows with a roof, and with spires on either side. There are five windows on either side of the nave, with stained-glass paintings in the mid-section. These windows are the result of a money-raising drive in the early 1950s, when individuals gave fairly substantial sums for the embellishment of the church. The series of stained-glass paintings is concluded with the altarpiece, where the motif is Christ's resurrection on Easter Sunday. The chancel itself has five sides of the octagonal form, and a ceiling slanting out from the centre in five sections. The walls in the chancel and the nave are painted yellow above the darker wainscoting. The chancel arch is painted red like much of the other interior objects.

The struggle to get their own church

The history of the Sør-Vågsøy church goes back to about 1900, when Vågsøy was part of the municipality of Selje, then the most populous in the county. In May, 1899, some 100 farmers met in the school house at Skramsbygda to speed up the process of building their own church in the southern part of the municipality. Initially they formulated a demand to split up the Vågsøy "sokn". This was followed up with a demand of building a church of their own. Simultaneously a fund-raising drive was initiated for this purpose. The political aspect of the church issue became a story in itself. A case in point was the fact that the people of Sør-Vågsøy felt it to be important to get as many representatives elected to the local council of Selje to gain any ground. After some "fighting", they were able to elect six representatives, which proved to be the decisive factor in the political decisions that were made.
The splitting-up of the "sokn" became a reality in 1905 after many years of correspondence between the "sokn" council and the central church authorities. Getting to church was an important argument, and one of the letters to the "Norwegian Church Board" contained a description of this. According to this letter, the crossing from Sør-Vågsøy to Raudeberg was hard for small sail boats because of strong winds. Unfavourable wind also made it hard to land at Raudeberg. People from Sør-Vågsøy sometimes had to stay overnight at Raudeberg, and in the winter months some people crossed the mountains in semidarkness to get to church.

Fund-raising for the church

In 1906, the building committee was appointed and the work got under way. The church was completed the following year. Pictures from the day of consecration show just as many people outside the church as inside. The congregation contributed mainly in the form of fund-raising activities, but many people also participated with practical work. In this connection, the bishop took the opportunity at the consecration dinner to thank the young for their interest in helping to build the church. The dean of Nordfjord, Anton Prytz, wrote an article in "Nordfjord" about the generosity shown by most people. The article described how much money the three villages of Skram, Skavøypoll, and Våge had raised, and all the things they had provided. There were still no chandeliers in the church, but people intended to start working on this project as well.

In the summer of 1951, a major restoration and painting work was carried out on the church, and electrical heating was installed. The following year, toilet facilities were built.

Otherwise the Sør-Vågsøy church has undergone few changes since it was built. On either side of the chancel we find the usual vestries. At the west end there is a fine entrance with arched windows above the main door and the side doors. The steeple base contains a porch and stairways up to the gallery. The base goes up to the middle of the west wall, and then tapers off to a square steeple neck with a copper-covered spire.

The altarpiece from 1907 is made by Sveinung Aanondson (1854-1919). The motif is "The Resurrection", a copy of Adolph Tidemand's (1814-76) picture "Christ's Resurrection" in Bragenes church in Drammen. The depiction of Christ is more naturalistic than traditional. Christ emerges from the grave, and the soldiers are struck with fear, whereas the angel with a palm branch worships.

On the altar there are two candlesticks from 1907. The Holy Communion set consists of a chalice, a paten, a pyx, and a wine flagon, all in silver also dating from 1907. Both the pulpit and the font from 1907 are made of wood. The baptismal bowl and the holy water ewer are made of silver and date from 1907 as well. Eight stained-glass paintings from 1952 have motifs from the life of Jesus. Four carved oak chairs from 1932 are made by Martin Endal.

From the service in connection with the 75th anniversary of the church in 1982. Many presents were given to the church on that occasion. From left to right: the verger Hans Wåge with the holy water ewer, the parish clerk Arnfinn Kragset with the votive ship model made by Henrik Holvik (in the centre). The vicar Aase is wearing the new chasuble. The Housewife Associations of Måløy and Skavøypollen are represented by Agnes Selstad and Lovise Tennebø.
Owner: I <i>Jul i Nordfjord 1982.</i> - Date: 05.09.1982. - Photographer: V. Fløde, Fjordenes Tidende.
I <i>Jul i Nordfjord 1982.</i>
05.09.1982.
V. Fløde, Fjordenes Tidende.