Ships going down and running aground in Solund

The archipelago of Solund was brutal for sailing vessels in strong westerly winds. But motor vessels went wrong as well, with tragic consequences. Around the islands are many wrecks, several of them are today tempting objects for divers. 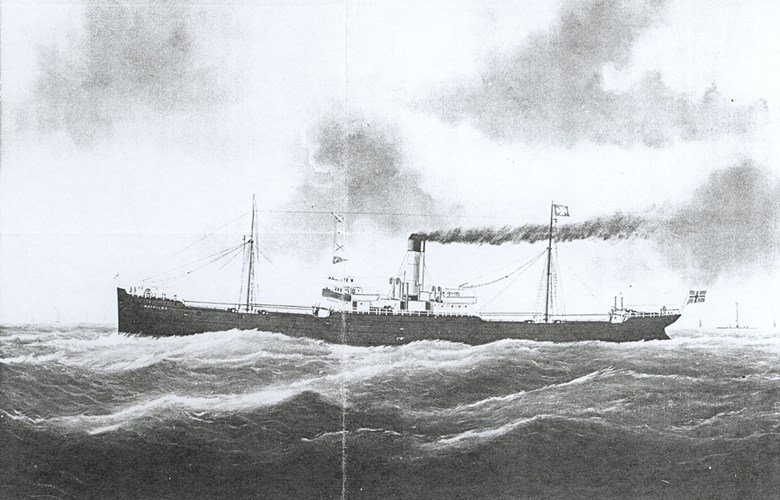 The picture shows the 4000-tonner SS "Mathilda", which was grounded in Solund on 3 October 1918. The twelve-year-old ship, built in steel and 120 metres long, was wrecked little by little. The crew in one of the lifeboats got ashore on some barren skerries at Sørværet near Værlandet. They huddled on the skerries to avoid freezing to death. One person tried to swim ashore, but perished.
People from all parts tried to salvage some wheat, and here and there they managed to unscrew things from the disabled ship. But to the west of Langøy, the waters are exposed to the open sea, the vessel went under, and the line of people looking for grain and other things useful, had to leave empty-handed. People said that the crab fished there had rusty shell for many years after.

The Mathilda was wrecked west on Ospa

One of the better-known shipwrecks is the D/S "Mathilda", which came in from the ocean and was stranded west on Ospa, during the First World War. Her cargo was wheat from the USA to Belgium. In order to avoid U-boat torpedoes, she decided to sail toward the Norwegian coast, and then head south. In the fog the vessel came too close, was stranded, and was stuck until the sea broke her down. The crew rowed in two boats before the wind, one ending up at some skerries at Sørværet, the other making it to Myrevågen at Værlandet. The people on the skerries were rescued with the exception of one, who tried to swim ashore.

Dead men tied to the rigging

During the First World War, the freighter "Sifen" (correct spelling unknown) ran into the rock in the west on Oksen, in fog. The ship came from South America loaded with maize, and sank at 40 metres. The crew escaped in the lifeboats and rowed northward along the coast. They saw glimpses of light at Sveholmen and rowed on to Hjønnevåg (Gjønnøyvåg).
The sailing vessel "Christiania" drifted aimlessly through the narrow entrance to Storsundet, which was more like a miracle. A gentle northerly breeze took her into the bay of Hårrevågen. They saw the masts from Sveholmen and rowed north. Brand-new sails had been blown off the bolt ropes. All onboard were dead, two of them tied to the riggings. The skipper had his wife and his baby with him - baby clothes and the bridge of a fiddle floating in the poop. The wood cargo kept the ship afloat. She was towed to Bergen.

Poop became a cottage on shore

At Huseflua near Gåsvær, a sailing vessel broke in two. The cargo is believed to have been hemp, which was used to spin fibre for seines. Half the vessel was rescued and taken to Gåsvær. The poop was used to build a cottage at the end of a residential building. This must have happened before 1830
To the west on Plitten, a sailing vessel was off course and was wrecked against the rock. The dog managed to get ashore and later settled at Lågøy. It whined and barked in pain in nasty weather!
Fylkesbaatane (steamship company) had capable captains and fared well in these treacherous waters. Nevertheless, the first boat, the "Framnæs", in 1913 went under water in the Nesefjorden.

A short time before the First World War, the "Frankenwald" was grounded near Ytre Steinsund and sank. Secrecy about the cargo led to speculations. Today the wreck is a favourite divers' object.
Particularly tragic was the wrecking of the "Bandak" from Porsgrunn in February 1949. In the night, in foul weather and poor visibility, on her way to Sogn, she came off course and went too far north, and ran into the steep cliff north of Grønholmen. The boat sank. At the steep rock in heavy sea, the crew were doomed among the floating deck cargo. Seven were lost. One drifted on wreckage 2-3 kilometres into Hopsosen, until he reached land. He also managed to get in touch with people. Only two were rescued. 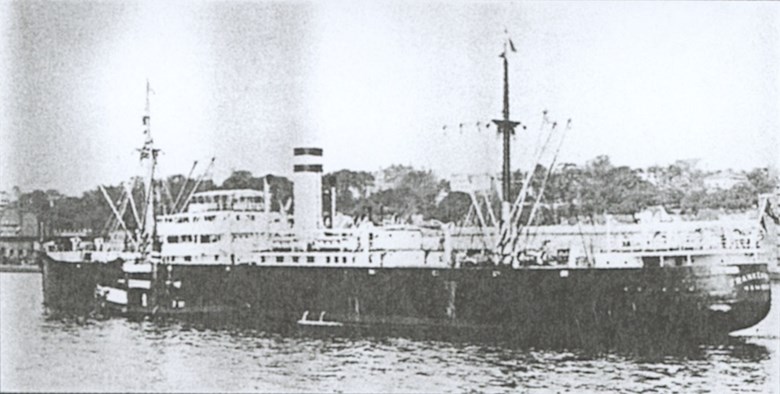 At the narrow sound in the south of Ytre Steinsund, the SS "Frankenwald" ran into the islet of Brattholmen. It was believed that a meeting boat with dark lanterns made the ship turn too late. The ship was German, coming from the south, 122 metres long making 12 knots. The ship was so big that it needed the whole sea-lane for itself in order to make the curve through the sound in the dark. The current is very strong there.
The 5000-tonner was grounded on 6 January 1940, at around six o'clock in the evening. She leaked water, drifted into a sheltered bay and sank. The crew, the captain, and the Norwegian pilot, Arnstein Trovågnes, were all taken to Bergen on a Norwegian motor torpedo boat. So near the outbreak of war, this wreck became a mystery. The cargo in particular was the topic of much speculation. With time, it was even unclear whether the boat came from the south or the north.
Owner: I bladet<i>Dykking, Norges ledende dykkermagasin.</i> - Date: Ca. 1935. - Photographer: Ukjend.
I bladet<i>Dykking, Norges ledende dykkermagasin.</i>
Ca. 1935.
Ukjend.

A part of the stem of this cement boat juts out of the sea in a bay on the south side of Ospa. Two boats were built of concrete, it is believed in 1929. It was also said that they were built in the Osterfjord. One of them was so heavy that they could not get it off the slip. The other one was put in operation, with a new engine.
Perhaps it was on the first trip north that they came off course across the Lågøyfjord, so that the boat touched the sea floor, to the west of Hamnholmen, it is believed. She sprang a leak, and they looked for a cove to strand it in. Unfortunately there was an underwater rock where they tried, so the boat stopped short of where they had hoped to land. She took in water, and the stern sank.
The company Olav Aalen from Kvammen took on diving assignments and salvaged the engine, a 150 HP 2 cylinder Bolinder, which Fylkesbaatane (steamship company) bought at a reasonable price. They installed the engine in the M/B "Nesøy." The engine worked flawlessly for 27 years.
Owner: Hans H. Steinsund. - Date: Ca. 2001. - Photographer: Hans H. Steinsund.
Hans H. Steinsund.
Ca. 2001.
Hans H. Steinsund.

This round stone was brought up from the sea floor in the sea-lane of Indre Steinsund when the sound was dredged in the late 1930s. The stone has a 3.20- metre circumference.
In the sharpest curve, where the bridge is today, there is a dangerous shallow, where many ships have run aground over the years. From the sea floor 2-3 millstones were brought up, in addition to this round stone which may have been formed in a pothole somewhere. This stone does not have its origin in the rock of Solund. Some sloop may have been grounded here and dropped it overboard, or worse, gone down with it.
Owner: Magne Hamre. - Date: 2000. - Photographer: Magne Hamre.
Magne Hamre.
2000.
Magne Hamre.
resources:
Steinsund, Hans H., Om Mathilda i Ve og vel. 1998 nr.1 og nr.2 . Organ for Solund kommune.
Landøy, Sverre: I Firda.19.12.1978. Førde.
Informasjon frå:
Johan L. Hjønnevåg, Solund.
Asbjørn Gåsvær, Solund.
Noranger, Trygve: Vår lange kyst.