In the spring of 1964 there was some cultivation work going on at the farm of Skaim. This work included removing some rock heaps left from clearing the fields and the bulldozer then touched some rather big rock slabs at the bottom of the heap. Lars Vikesland, the elder, realizing that this could be an old grave, stopped the work and contacted the local bailiff, who in turn contacted the Historical Museum in Bergen. The museum sent experts to the site and they quickly established that this was a prehistoric grave find. The excavation was soon under way, and a new chapter was added to the oldest part of the history of the farm. 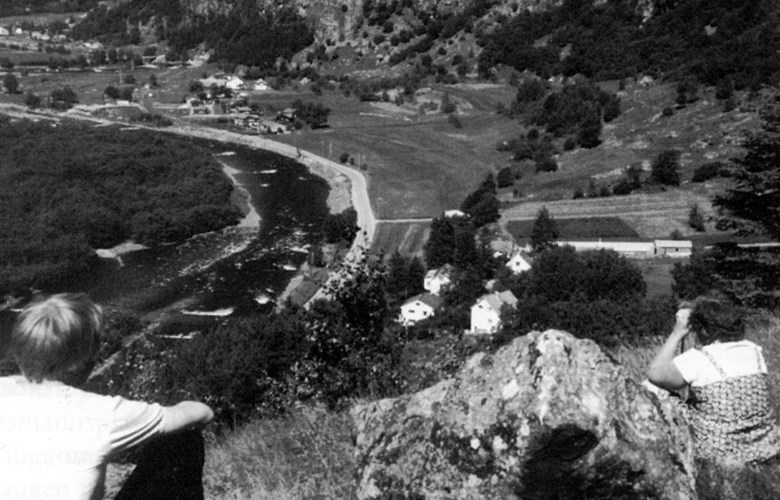 View towards the northwest down to the farm Skaim (in the upper left corner). Skaim is located halfway between Vangen and the lake of Vassbygdivatnet.

It turned out that there were two graves in the mound. In the upper part the following objects were found: a piece of a bronze key, a handle from a box, a large number of iron nails, as well as 25 beads, most of them made of coloured glass, but some were also made of silver. The find proved that this was a woman's grave dating from the Viking Age, probably from the ninth century, where the deceased had been buried in a wooden coffin.

The stone slabs belonged to another grave deeper in the ground, and this grave was three to four hundred years older. This was also a woman's grave. She was buried with some of her belongings, such as a pottery jar, probably having contained some food, four buckles, some beads, a knife, four spindles for a distaff, and remnants of various other objects, such as at least one wooden box. This grave, dating from the fifth century, was plundered at the time as when the Viking woman was laid to rest in the same mound.

In 1933 Lars Vikesland found a grave on his farm. While ploughing the field the ploughshare hit a slab. When they removed the slab, they saw a pottery jar and remnants of a human skeleton. The museum was notified, and the curator Johs. Bøe came to Aurland to take care of the excavation work. The grave consisted of a slab coffin, some 2.5 metres in length. In addition to the pottery jar, the woman had been equipped with four bronze buckles, two sets of hooks and eyes in silver, one belt ring, a knife, a spindle, remnants of a wooden box, as well as various smaller objects. Most of the woman's skeleton was found. She was lying in a bent position in the grave on her left side, with her head facing south. This grave also dated from the fifth century. These two women are likely to have lived at the same time and must therefore have known each other. Could they have been related as well? 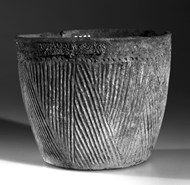 In 1910 a former owner of the farm, Peder Skahjem, found an arrowhead in the field. He handed over the arrowhead to the museum along with some other objects he had found in a rock mound; another arrowhead, a knife, a piece of a sickle blade, and a piece of a scythe blade. In the mid-19th century an arrowhead is said to have been found in a small mound in a field at Skaim. A war axe from the Viking Age that had been kept at the farm for a long time was given to the museum in 1985. This axe was allegedly also from a mound, but most likely from a different one. All these finds must have come from men's graves from the Viking Age that now have been cleared.

Burial mounds reserved only for the few

Even if the finds are relatively numerous, the number is, nevertheless, low in relation to the many people who must have lived at Skaim in prehistoric times. From the fifth century until about 1050 when Christianity put an end to heathen grave rituals, close to 25 generations had lived on the farm. Even if only husband and wife from each generation were buried in mounds, there should have been dozens of grave memorials of this kind at Skaim.

Few farms in the county have so many, and where there are major grave fields, these probably do not belong to one farm only, but rather to entire hamlets or villages. Most people had to make do with less, and traces of these are rarely found. Why some people were granted the privilege of being buried in their best clothes, with jewellery and weapons, food and drink, is not fully known.

The grave finds at Skaim indicate that the farm was settled in the fifth century and in the Viking Age, and for this reason, it is typical of many old farms in the county. From the very first centuries AD the graves are few, rarely more than one or two from each farm, if there are any at all. The earliest graves date from the fourth or fifth centuries. From the late sixth century very few graves exist, and they do not reappear in earnest until the Viking Age at about 800AD.

At Skaim the two earliest graves belong to the Age of Migration (400-550AD) and the four-five others from the Viking Age (800-1050AD). However, from the eight-ten generations who lived from the late sixth century until about 800AD there are no grave finds whatsoever. We believe that this lack of finds has to do with a change in burial rituals. A less likely explanation is that the farms were deserted and the fields lay fallow throughout this long period. According to written records, Skaim was also settled in the Middle Ages. Consequently, there is reason to believe that there has been a continuous settlement on this farm for more than 1500 years.