Kaupanger church is a stave church from about 1190. It is located on the grounds of Kaupanger Manor. The church has a seating capacity of 125, and it is the biggest stave church in the county. A number of major restoration projects have been carried out, such as in 1862 and in the 1960s. Kaupanger stave church is a "sokn" church for the Kaupanger "sokn" in the parish of Sogndal. 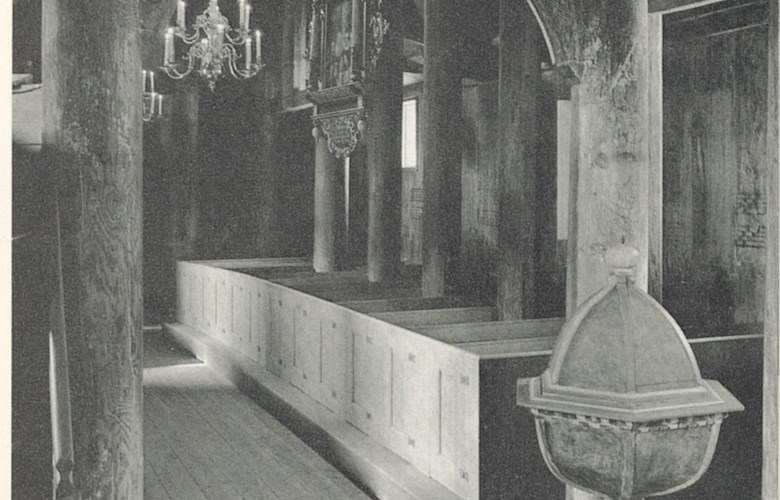 From the interior, seen from the chancel into the nave. The font with the lid in the foreground. In the background one of the chandeliers, and to the right one of the epitaphs. The pews have doors.

A stave church without much decoration

The church exterior today has horizontal panelling in a greyish-brown colour. The interior is mostly of wooden colour, with the exception of the areas where the baroque wall paintings were uncovered in connection with the restoration work in the 1960s. These paintings were hidden under a coat of oil paint from 1862. Practically all the interior dates from the century following the Reformation. It is the least decorated stave church in the county, and there are no capitals and carved portals left. This is rather strange, as Kaupanger has been a seat of noblemen and a manor since the Middle Ages. The reason for this is unknown.

Originally the church was some 10 metres long and 7.5 metres wide, and there were no other windows in the nave apart from some small round apertures high up on the walls. In the dark church room the congregation remained standing throughout the service. Only the elderly and the sick were allowed to sit on some makeshift benches along the walls. In the period of about 340 years when the church was Catholic, there was an external gallery, but it had no panelling. Some time between 1200 and 1350, the church was extended by 3.5 metres. For this extension two extra staves (upright posts) were put in, and the present church has 20 staves in all in the nave and two in the chancel. To put this in perspective, the Urnes stave church has 14 staves and the one in Borgund 12. The extension meant that the Kaupanger church became the biggest of the stave churches in Sogn.

The present church is to a large extent marked by the style of the 17th century, when major changes were carried out. A turret was built on the roof ridge, in addition to porch and windows. The walls were panelled, and pews and pulpit were put in. On the northern wall a funeral chapel for the Heiberg family was built in 1720, made of white-washed stone. It was torn down in 1872.

In 1862, rows of windows were installed in the side aisles and the wall in the central room, and a new porch was added. Furthermore, two galleries were built at the back of the church, a small one high up, and a bigger one placed between the staves with an extra set of columns underneath. The first organ was placed on the gallery. Later on, it stood at the front by the chancel, but today the organ is placed at the rear end of the nave on the north side. In retrospect, experts have called all these changes a brutal modernisation. Fortunately, the church was saved from demolition, mostly because of the good quality and condition of the building material. Another important reason was that there was sufficient seating capacity in the church.

The exterior of the church had white-painted, vertical panelling, and on the roof dark pantiles were laid, to match the roof of the Kaupanger Manor close by. The interior was painted in ochre and pale-blue oil colours which covered well the almost deleted baroque paintings. The altarpiece, the font, and the epitaphs in the church all ended up at the local museum. The old objects were to be removed from the church.

Returned to the style of the 17th century

A new restoration project was carried out in the years between 1959 and 1965, after a period of some 100 years with a white-painted church. Once more, it was important to go back in time to recover the original character of what once was a stately stave church. The architect wanted to avoid a Romantic reconstruction of the church as it could be imagined to have looked before the Middle Ages, but rather to recover its style from the 17th century. This work was partly based on copying similar church buildings from the same period, but most of the reconstruction work was based on what the historical research and excavations uncovered in terms of previous building forms and interior.

The many windows were removed and replaced by wall areas. Today only three windows remain on the northern wall, two on either side of the chancel, and one to the east. All windows are small-paned with leads. The steeple is covered with copper, and the turret itself stands out with its four extra steeples on each corner of the turret neck. The rest of the roof is covered with shingles. In the latest restoration work the interior walls were treated with lye, and this is why the very special areas with so-called neumes appeared - a series of notes which turned out to be a hymn painted directly on the nave walls. These notes have been interpreted and arranged, and today this hymn has found its place as no. 197 in the new Hymn Book.

The altarpiece from 1634 was given by the bailiff Gjøde Pedersen. It is a relatively simple Renaissance object, and is held to be of inferior quality compared to the pulpit. The main picture shows the crucifixion scene with Mary and John on either side of Christ on the cross. The gabled top section shows a picture of the resurrected Christ.

On the altar there are two brass candlesticks from 1609, with an inscription showing that they were given by Gjøde Pedersen and his wife Kiersten. In addition, there is a two-branched brass candelabra from 1720 with an inscription on the front shield.
The Holy Communion set consists of a chalice in silver plate from 1665, with inscription; a silver-plated paten; a hexagonal silver pyx from 1867 with a relief on the lid of the Virgin Mary with the Infant; and a wine flagon in silver plate.

The hexagonal baptismal bowl is made of brass, and in the bowl are two shields engraved with the letters ICN and MID respectively. The chancel arch dates from approx. 1300, and was probably part of an earlier altar canopy above the main altar. The two brass chandeliers date from 1723 and 1965. There are three epitaphs in the church. One dates from 1634, depicting Gjøde Pedersen and his family; in the gable there is a picture of an unknown vicar's family. The second epitaph shows Thomas Vilhelmsen, died 1634, with wife and children. The third dates from 1659, showing the sawmill owner Thaames Willumsen with wife and children.

The organ from 1967 has four registers, built by I. Starup, Denmark. There are two church bells from about 1200.

The altarpiece is a relatively simple Renaissance work of art. The main picture shows the crucifixion scene with Mary and John on either side of Christ on the cross. The gabled top section has a picture depicting the resurrected Christ. The hexagonal wooden font with lid probably dates from 1634, and was probably painted in 1661.
Owner: I <i> Kaupanger <b>+ N</b>.</i> - Date: Om lag 1966-1970. - Photographer: Ukjend.
I <i> Kaupanger <b>+ N</b>.</i>
Om lag 1966-1970.
Ukjend.

The altarpiece is a relatively simple Renaissance work of art. The main picture shows the crucifixion scene with Mary and John on either side of Christ on the cross. The gabled top section has a picture depicting the resurrected Christ. The hexagonal wooden font with lid probably dates from 1634, and was probably painted in 1661.
Owner: Sogndal kyrkjekontor. - Date: 1999. - Photographer: Ukjend.
Sogndal kyrkjekontor.
1999.
Ukjend.