For more than thirty years the Trollefossen waterfall on the farm of Engjabøen at Holmedal provided the woollen mill by the same name with electric power until the buildings burnt down in 1932. The enterprise created jobs, but it faced many problems. 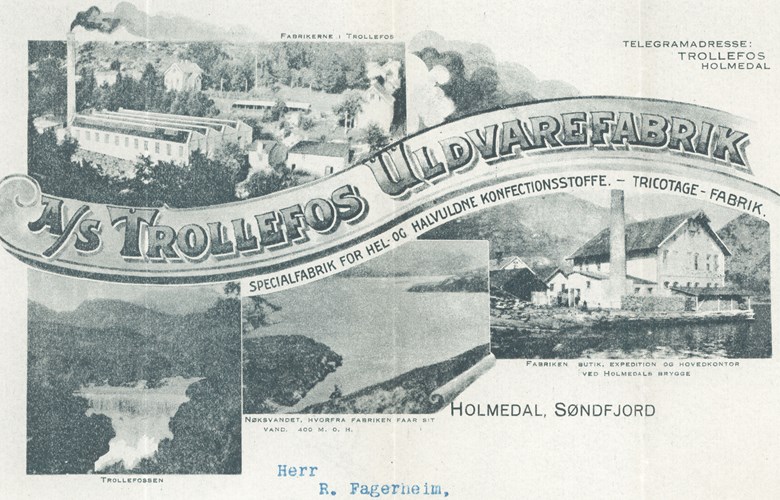 The sheet of writing paper was used by the mill in 1924. The letterhead had pictures of the factory buildings, the lake of Nyksvatnet, and the Trollefossen waterfall. The letter is addressed to R. Fagerheim with the message that Theodor Bjaanes is unable to come to the next school board meeting. It is signed by Chr. M. Vestrheim.

Started up during a venture period

The joint-stock company of "The Trollefos Uldvarefabrik Ltd." was founded in 1898, in a period characterized by strong industrial growth in the Dalsfjord area. At roughly the same time, the brick works at Vårdal and at Helle were established, the clog factory at Dale, and the dairy "Flora" at Holmedal. Johan Jenssen from Bergen, who lived at the Holmedal farm at the time, had a hand in most of these ventures, as well as in the Trollefos Uldvarefabrik. He found investors willing to take risks, and watercourse rights and land for the factories were bought.

The following year, the mill was completed, and production could begin. Looms, spinning machines, knitting machines, and carding sets were imported from Germany. Local farmers provided the wool, and travelling agents were hired to buy wool and rags. Cloth for suits and dresses, wool blankets, knitting yarn, rag rugs, carpets, and quilts were made. The factory had its own outlet on the steamship quay at Holmedal, and a dwelling for four worker families at Engjabøen. Many of the workers came a long way - some in rowboats across the fjord every day.

The workplace environment there as in most other textile mills at the time was of little concern. The machines were very noisy, and the workers were not protected against drums and rollers. On several occasions fingers and hands were injured.

Problems from the very beginning

The woollen mill at Trollefossen turned out to be a financially unfortunate project. Even before production could start, money from shareholders who had not paid had to be recovered by legal action. After a few years, the factory had to offer its products at reduced prices in order to pay the employees. For some periods business improved, but into the 1920s, the situation had become very difficult, and in 1923 the company went bankrupt. Production was kept up by a new company. Then disaster struck one April night in 1932. The factory building burnt to the ground. Buckets and hoses were stored inside the building, so little could be done to fight the fire.

The mill was later not rebuilt. The machines were sold as scrap iron, and the factory site has since been abandoned.

Johan Jenssen, born in 1868 in Bergen, bought the farm of Holmedal in 1890. He had attended agricultural college. Jenssen had new houses built on the farm and cultivated more land. But he is best known as a venture capitalist in this area. He was involved in the establishing of the woollen mill of Trollefos Uldvarefabrik, the Helle Teglverk (brickyard), the dairy "Flora", and had also invested in the Dale Kloggfabrikk (clog factory).
Owner: Kjell Eikemo / Fylkesarkivet i Sogn og Fjordane. - Date: 1900 - 1905. - Photographer: Ukjend.
Kjell Eikemo / Fylkesarkivet i Sogn og Fjordane.
1900 - 1905.
Ukjend.