Sauesund, like most places with an inn, is situated on a sound. The old inn is at Atløy, in the municipality of Askvoll, with a view across the narrow sound of Sauesundet. The municipal centre of Askvoll, on the opposite side of the Granesundet sound, has now taken over all the traffic which earlier went across the Sauesund. 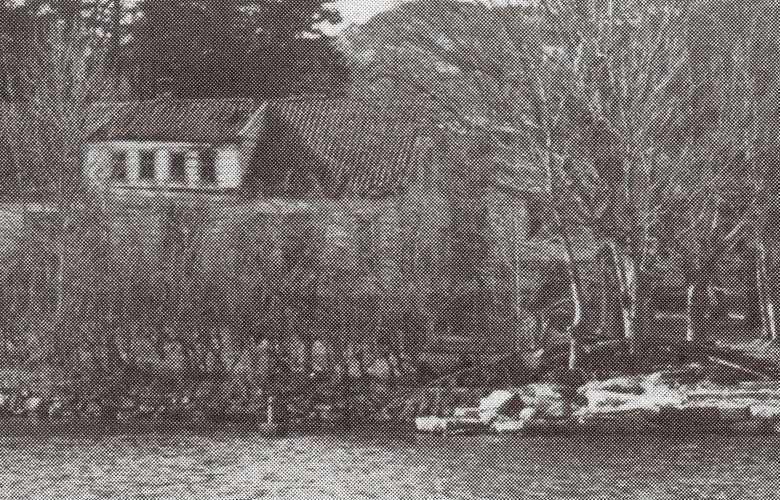 The inn at Sauesund was early a central place on the sea lane. It was one of the oldest inns in the Sunnfjord district. The general store to the right.

Sauesund was for some time a crofter's farm under the farm of Kumle. The place was licensed to operate an inn in 1622. The first innkeeper was Henrich Bloch from Bergen. The first reference to him at Sauesund is in 1662. After he died in 1685, his widow married the German Herman M. Uldrich. In 1712, Lars Bloch took over the inn, but in 1713 he handed it over to the German Fredrich Zitselau. Sauesund was in 1723 described as an old but essential, licensed inn, which brought little profit. The bailiff in 1735 referred to the place as a highly essential harbour for travelling people, but wanted the house removed where beer and brandy were served to the churchgoers. Five years later, there was still hardly any business here, but the inn was essential for seafaring people and served as a posting station.

In 1737, Hans Jensen Ryland, Zitzelau's son-in-law, took over after his mother-in-law. In addition to the houses at Sauesund, buildings at Bulandet and at Askvoll were included in the bargain. Ryland mortgaged Sauesund and other properties to raise capital. He borrowed from Hans Schultz in Bergen, but was unable to meet his obligations. So Schultz took over Sauesund and sold the place to Hans Pedersen Hansen in 1748. Claus Frantzen Wulff bought Sauesund from Hansen in 1776. He had lived in Bergen since 1760, and was a maritime captain. In connection with a new license arrangement in 1778, he petitioned and was granted permission to sell tobacco. In 1784, Wulff sold the inn to Nils Martinussen Bøe. Bøe the following year was given royal license to operate the inns at Sauesund and at Stavenes. But the petition for the inn at Askvollsøyra was turned down.

According to the district magistrate Hans Arentz in 1785, the inn had two beer pubs, where the innkeeper sold "inn merchandise". One was Stavenes, and the other was Øren in Askvoll vicarage. The Øren pub was meant to serve people on their way to church.

In 1792, Nils Martinussen Bøe had to sell his properties to Hilbrandt Harmens, whom he owed money. Harmens sold Sauesund to Elias Mathiasen Zitzelau in that same year for 900 "riksdalar". The sale also included the buildings at Sauesund, Stavenes, Bulandet, and at Ask. Zitzelau owned and operated the inns at Sauesund and Stavenes, until he was lost at sea in 1806. His widow, Berte Susanne, carried on alone until 1812, when she married Ole Eliassen Kaland. She ran the inn until 1839. In 1840, she sold the place to Wilhelm Conrad Herford. At this time there were new regulations for commerce, and no licenses were required. Anders Matland bought Sauesund in 1874. He had permission to keep a general store. The shop was in business until the late 1950s.

In 1865, Henrich Paasche ran the shop there, while Oscar Christian Svanøe was shopkeeper and farmer at Sauesund at the end of the century.

A scheduled stop of the Fylkesbaatane (steamship company)

When Fylkesbaatane started up scheduled boat services between Bergen and the Sunnfjord and Nordfjord districts, Sauesund was regarded as an obvious place for the boats to make a stop. For more than two hundred years the place had been a posting station. The fishermen farmers in the district had an obligatory duty to provide a large rowboat and transport the travellers to the next posting station. The steamship schedules between Bergen and Trondheim had as early as in the 1850s a stop at Sauesund. There was no quay there at the time, so the steamship was boarded. After four to five years Fylkesbaatane moved the stop from Sauesund to Prestøya. In 1899, Sauesund was given consideration as a stop, but Kumle was chosen. From 1912 Kumle seems to have been established, Sauesund is referred to in a parenthesis behind Kumle in the published schedule. After the Second World War both places were included in the schedule of Fylkesbaatane.

In 1958, only a cargo ship stopped regularly at Sauesund. A private quay was used, but in the autumn of that year the scheduled steamship was denied access there. Fylkesbaatane would wreck the quay, was the contention. The fee would not bring in enough to have the quay repaired, and they would have to make do with boarding in the bay.

When Hans Pedersen Hansen took over Sauesund in 1748, a survey of the place was carried out. The buildings at the time were a living room and a larger room, each with an iron tiled stove, and with two small bedrooms and two kitchens - all under one roof. In addition, there was a guest house with a baking oven, and on the jetty a small fishing shed with an external gallery. There was also a sea shed, a stave sea boathouse, an "eldhus" (cottage used mainly for washing clothes and baking) with an extension, an old hay barn, and a cowshed, all under the same roof, and an old blacksmith's workshop. Almost all of the buildings were described as "derelict".

In 1899, Abraham Mathias Sørensen Høvik opened a general store at Sauesund, A. Høvik - Ass. Landhandel. He sold flour and groceries, clothing, and stoneware. Coal, wood, oil, and salt could also be bought. The business was in operation at Sauesund for 30 years, whereupon it was moved to Skaret at Nedre Grov. When Abraham Høvik died, his widow ran the shop together with her son Jim.
Around 1950. the cannery Sætre og Sauesund AS was in operation at Sauesund, canning crab.

In 2001, Sauesund has a fine harbour and a quay for freighters. In the marina, visitors can book places. Investments are made in small-boat tourism. Only the foundations are left of the trading post and the inn. Sauesund has gradually expanded westward. There is a new housing estate, a nursery, day-care centre, a school, a culture centre, and a sports ground. Sauesund has many of the institution needed to make it a community. Although the place is no longer a centre for trade and sea traffic, the future looks bright.

The history of Sauesund goes back to the early Middle Ages. In 1014, a battle is believed to have been fought in this sound between the tribal chiefs Håkon jarl and Heilag-Olav. Almost a thousand years later the place had become a small centre at Atløy with a nursery day-care centre, a school, a culture centre, and a sports ground.
Owner: Stiftinga Jensbua. - Date: om lag 2000. - Photographer: Leif Grane.
Stiftinga Jensbua.
om lag 2000.
Leif Grane.