Totland church is a wooden longchurch at Indre Totland, in the far eastern part of the municipality of Vågsøy. The church, which can seat 250, was consecrated on 8 August, 1912 by the bishop Johan Willoch Erichsen. The architects, Lars Sølvberg from Utvik, and Jens Sølvberg from Bryggja, made the designs. Totland church became a "sokn" church in 1964, and in 1967, the "sokn" was transferred from the parish of Davik to Vågsøy. On 1 January, 2002, the three "sokns" in the parish were united into one, with the result that Totland church lost its status as a "sokn" church. 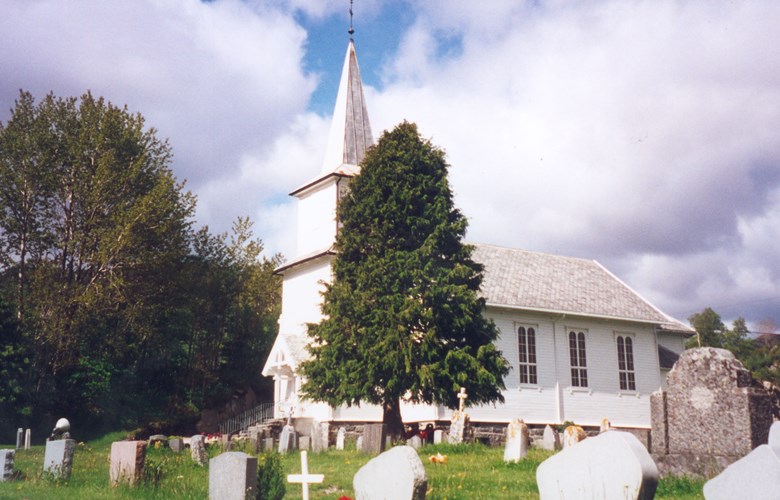 Totland church is a well-balanced building, and it is easy to see that the architect Sølvberg has included a number of details from the five-year-older Sør-Vågsøy church.

Church on the northern side of the fjord?

The only "mainland church" in Vågsøy was built when the area was still part of the Davik municipality, and the exhausting crossings of the Nordfjord to get to church during the winter months were some of the reasons why the church at Totland was built. Around 1900, the Rugsund church suffered a lack of space. The question then arose: should a new church be built there, or should the Rugsund church be moved to Totland? Maybe it would be a good idea to build a new and bigger church at Rugsund, and a smaller annexe church at Totland? Various alternatives were brought up, but everybody agreed that it might be convenient to have a church on the northern side of the fjord which could be used in wintertime when church attendance was low at Rugsund.

The first decision made by the "sokn" council in 1899 was that the Rugsund church (built in 1837) was to be moved to Totland. Then a new and bigger church would be built at Rugsund. However, the Ministry for Church Affairs refused to approve this decision. The Rugsund church was big enough if the "sokn" was to be divided. The following year, then, a new decision was made to the effect that the church on the southern side of the fjord was to be extended. But what about a church at Totland? In 1903, the church supervisors met but failed to make any decision. A couple of years later, they were finally able to agree to a decision of building a chapel church at Totland. They eventually agreed on a church site in connection with the graveyard at Kvile at Totland. Around midsummer 1911, the building material from Nordmøre was transported to Totland on two barges.

The architect Lars Sølvberg fell ill before he managed to complete the designs for the chapel, and Jens Sølvberg, who had learned the ropes from the architect, had to finish the work. The designs were approved by the State Building Inspectorate with only minor changes. Originally the chancel addition was not included in the designs. There was actually no money available for this addition, either. But when they were about to start the construction, the villagers worked collectively to raise the necessary means. The total cost of the church was 17 000 kroner.

There is nothing spectacular about the exterior of the church building with its traditional vestries built on either side of the chancel. The entrance is particularly elegant with its main door decorated with wrought-iron mountings. But once you enter the church, you are definitely in for a surprise when you see the beautifully decorated interior. The artist Lars T. Kinsarvik decorated the Totland church before he made the decorations in the Eid church. With his assistants he carried out beautiful paint decorations and adorned parts of the interior with carvings. The local craftsman Rasmus Bortne is held to be the man who carried out most of the work inside the church, apart from Kinsarvik himself.

The alternations between carvings and the traditional rose-painting decorations can be seen in the tension rods in the ceiling, on the pulpit, on the framework of the altarpiece, on the chancel arch, and the font. Both the walls and the gallery front are also elegantly decorated in the rose-painting pattern. Kinsarvik was inspired by the Bible, and carried out his work very conscientiously. Some people felt that such a national-romantic decoration was unsuitable in a church. The artist himself maintained that the Bible was his guideline and source of inspiration when he was working in a house of God. Most people, however, admired his work very much. The colour scheme is nice, providing both a joyful and dignified mood.

The steeple of this church is identical to the steeple of the Sør-Vågsøy church, and it is easy to see that it is the same architect who has designed both churches. The chancel addition has five sides of the octagonal form, and a ceiling slanting out towards the sides. An addition was built next to the church in 1971, containing a mortuary room/chapel of rest and a room with toilet facilities. Totland chapel district was separated from the Rugsund "sokn" in 1953, and a "sokn" council of its own was established. From that year on, the name of the house of God was changed from chapel to church.

The altarpiece from 1912 has the following inscription at the back: "Copy of Sir Joshua Reynold's "The Holy Family with the Infant & St John" in the English National Gallery. Painted by Miss F. Howarth, who donated it to the Totland chapel at the consecration on 8 August, 1912". Miss F. Howarth is said to have been a friend of the vicar's family at Davik, and was a frequent guest in their house. The framework of the altarpiece is carved and painted by Kinsarvik. The altarpiece depicts Joseph and Mary with the Holy Infant, and John the Baptist with his characteristic staff cross. There is a glimpse of the river Jordan to the left, and the mountains in the background are probably Lebanon and Hermon.

On the altar there are four brass candlesticks. Two of these date from 1912, and two from 1926 with the inscriptions "Gloriam Dei" (to the glory of God), and "Rasmus L. Rimstad MCMXXVI." The Holy Communion set consists of a chalice, a paten, a pyx, and a wine flagon from 1912. The baptismal bowl has the inscription "Suffer little children, and forbid them not, to come unto me (Matthew 19;14). The silver holy water ewer is like most of the interior objects from 1912. The chandelier hanging from the ceiling in the nave, has 24 branches. The organ from 1996 has seven registers, and is made by "Orgelmakerij Steendam" in the Netherlands. The church bell from 1912 has the inscription "Geg. V-Bochum Verein in Bochum", and is made by der "Bochumer Verein für Gußstahlfabrikation".