The great transformation in Stongfjorden

Stongfjorden was one of the first industrial sites in Norway, and its aluminium plant was the first in Scandinavia. 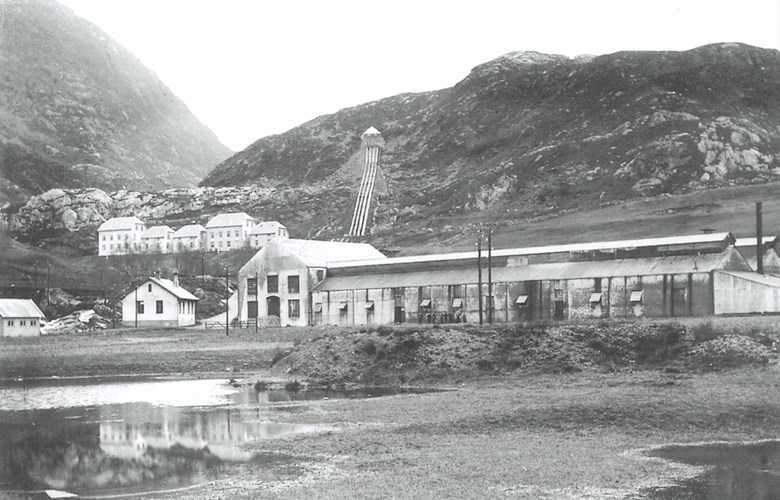 In 1908, 'A/S Stangfjorden Elektrokemiske Fabriker' started the production of aluminium. This was the first aluminium plant in Scandinavia.

Started by a person from Bergen

The industrial development in Stongfjorden started in 1897, when the industrial pioneer, consul Peter Jebsen from Bergen was informed about the waterfall and the river there. He made a contract with the local land owners to rent the water rights in the river, at the same time getting the right to dam the lake of Stongsvatnet. He then built the dam and the hydro-electric power station. The generated electricity was used in two factories producing iodine and peat coal.

However, the production of peat coal and iodine did not prove to be profitable, and it was discontinued after a few years. Instead, BACO (British Aluminium Company) took over, building the first aluminium plant in Scandinavia there. This industrial development took place at the same time as the one in Vadheim, and these two villages were in fact the first two industrial sites in the county, earlier than Høyanger, Svelgen and Årdal. In 1930, the centre of Stongfjorden had actually more inhabitants than Førde.

The workers in Stongfjorden lived close together in "Gata" (the Street), in contrast to the scattered farms and other houses in the village. The small community soon became actively involved in the trade-union movement. The first celebration of 1 May (Labour Day) in our county probably took place in Stongfjorden. The management of the company also worked actively to strengthen the social conditions of their employees, with the result that the conflict level at the workplace was kept relatively low throughout the difficult and unstable 1920s and '30s. In addition to building the special workers' houses which had WC and electricity, the factory also built its own school with a teacher's residence, as well as supplying the school with much educational material. The company also provided bank loans to workers who wanted to build their own houses, and ran the passenger boat to Askvoll. When the factory started up in 1908, the village got street lights, and later on a public bath was built.

Too small among the big players

Unfortunately there were production disruptions from time to time because of lack of water, and for this reason the management frequently had to lay off workers. For a period of three years after 1918 there was no production at the factory at all, and many workers then left for Høyanger. In order to stabilize the production, a contract was established with the energy company "Ålfotselskapet" to supply electricity in 1928. This meant that from now on there was a more continuous production. However, the factory in Stongfjorden was small compared with the major producers in Høyanger, Glomfjord and Tyssedal, and any extension was out of the question as the power reserves were already fully developed. Another problem was the price fluctuations of aluminium, and it was sometimes hard to sell the metal.

The decisive factor leading to the end of the production in Stongfjorden was World War II. Being a British citizen, the then managing director Maurice Russel Turner had to flee the country in 1940. The Germans took over, and continued the production until February, 1945. The factory was an important part of the German war machine, but finally had to shut down because there was no longer any raw material.

When peace came to the country, the British no longer wanted to restart the production in Stongfjorden as it had not been profitable enough. Instead, "Norges Fiskarlag" (The Norwegian Fishermen's Association) established the shipyard "A/S Stangfjordanleggene" (Ltd.) in 1948, and on the quay a net-mending facility was established. There was much optimism linked to these new establishments, but both were shut down in 1952. Many workers then moved to other industrial sites, particularly to Høyanger, Årdal and Sunndalsøra.