On 3 February 1940, the SS "Hop" left Bergen for England in ballast. The boat never got there. Three weeks later, the newspaper Firda Folkeblad had a short report with the headline "Bergen ship with 17 men missing." The captain was from Askvoll. Several years passed before the captain's widow had knowledge of what had happened. And she had to find out by herself. 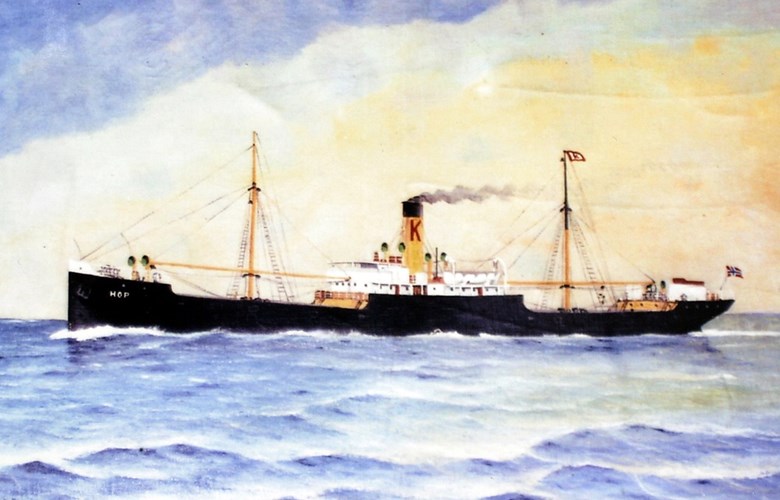 The SS "Hop" of Bergen. The ship was 2250 register tonnes and built in the Netherlands in 1916. The "Hop" on 3 February 1940 left Bergen for England in ballast. On 20 February the newspaper Bergens Tidende reported that the ship had not arrived and was "assumed" lost due to action of war.

In 1949-1951, the Norwegian state published the four-volume Våre falne (our fallen). About the captain of the "Hop" is written: 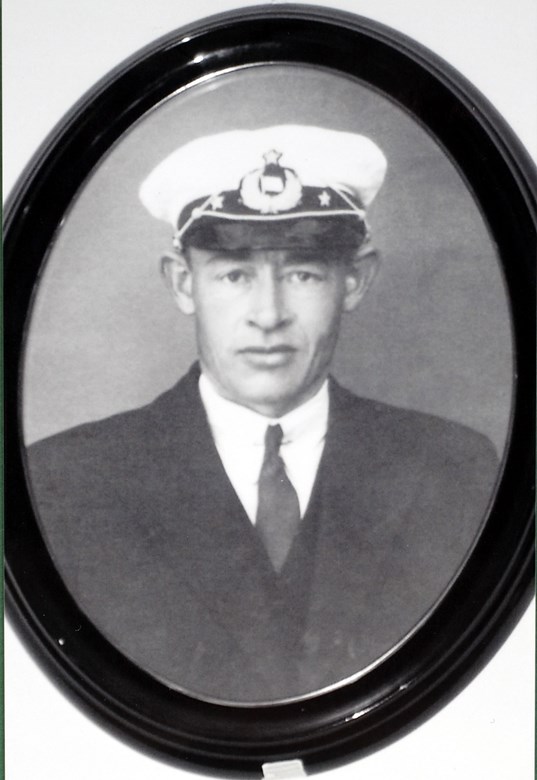 The merchant fleet at war before 9 April 1940

When the Second World War broke out on 3 September 1939, Norway declared herself a neutral country. The belligerents, German on the one side, England and France on the other, immediately established war zones at sea, laid minefields, and implemented measures against ships of neutral countries. Norway soon lost ships because of the war. On 13 September, the "Ronda" was hit by mines off the Dutch coast and sank in a matter of two minutes. 18 people died. There were soon more losses due to war. In this way, Norway entered the war long before the German attack on 9 April 1940. During the neutrality period from 3 September 1939 to 9 April 1940, Norway suffered heavy losses. A summary from June 1940 shows 50 ships lost due to the war. In addition, eight ships had disappeared without a trace, but which were regarded as losses due to war actions. The "Hop" was one of the eight.

Sjømennenes Minnehall (memorial hall for seamen) at Stavern has information on all merchant vessels lost due to war actions during the Second World War 1939-1945. About the "Hop" there is the information that the ship was officially declared missing on 20 February 1940 and "presumed" lost due to war. The shipping company, August Kjerland & Co in Bergen, made inquiries to find out what he happened, but "it was in vain."

"disappeared without a trace"

The biography volumesVåre falne (our fallen) have reference to the entire crew of the "Hop". In every reference there is the information that they were onboard the SS "Hop", which "disappeared" or "disappeared without a trace" en route to England. In one biography is written: "One has since not heard anything from ship or crew." This information was printed as late as in the period 1949-1951, whenVåre falne (our fallen) was published.

The "Hop" torpedoed by German U-boat

After the war it was gradually discovered what had happened to the eight ships that had disappeared without a trace. Studies of German naval archives gave reliable answers to six of the disappearances. The history Handelsflåten i krig 1939-1945 (the merchant fleet at war 1939-1945) , which was published in 1992, has the information that the "Hop" was torpedoed without warning by the German U-boat U37 under the command of captain Werner Hartmann. The incident happened in position 58° 55°N 14°V, in the morning of 4 February 1940, at 04.14 hours German time. No information is given, however, about when Norwegian authorities learned these facts, nor anything about the crew. The knowledge we have is due to the fact that the family as late as four years after the war learned the facts about the crew of the "Hop", and in a quite special way.

"Some information from the wartime..."

In the summer of 1949, Einar Seim from Kinn visited Shetland. In an article about his trip in the newspaper Firda Folkeblad (22 December) there is a paragraph with the headline "Some information from the wartime." Seim had heard people on one of the islands talk about a lifeboat which had been broken against a reef. His story:

"On 10 February 1940 the corpses of three Norwegian seamen drifted ashore (..). They were buried at Tresta, on the north side of the church. Other corpses drifted ashore to the north at Unst. On wreckage which also drifted ashore, was written "Hop, Bergen". People therefore believed the name of the boat was the "Hop" (...). I have a copy of the report which the district clerk sent about the coroner's inquest at Fetlar, if anyone is interested."

Had the wedding ring back

One person took more notice of the paragraph about the war time than anyone else: the widow Ragna Lutenthun. She contacted Einar Seim and learned more. On the lifebelts which the deceased had on was written "HOP BERGEN" There was no doubt, the seamen were from the "Hop". The urgent question for Ragna Lutenthun was now: Was her husband one of them?

She passed on what she knew to two other widows she knew. And she approached Bergen Politikammer (police headquarters) and asked their assistance in finding more information about the discoveries on Shetland.

Some time later she had confirmation that her husband, Kristoffer Lutenthun, was one of the found corpses. The corpse had been found on the beach near Haroldswick on the island of Unst on 9 February 1940. He had been buried in the churchyard at Ballista together with others.

In the summer of 1950, she learned after enquiry to the British Embassy that coroners' reports, personal belongings, etc. that the embassy had received from Shetland, had been passed on to Bergen Politikammer. Yet only in December 1953, after her written request in October, were her husband's possession sent to her:

The inscription on a grave in the churchyard of Lunna church on Shetland sums up in few words what happened, - a tragedy unknown to the families until several years after the war. It reads:

Family set up a memorial plaque

In 1994, a group of people went to Shetland to unveil a memorial plaque. Magnhild Lutenthun Fløholm and Asbjørn Lutenthun (the daughter and son of Kristoffer and Ragna Lutenthun), were among them. They now knew that their father's grave was one of the eight graves in a churchyard on the island of Unst. The memorial plaque on the church wall beside the eight graves was unveiled on 11 August 1994. 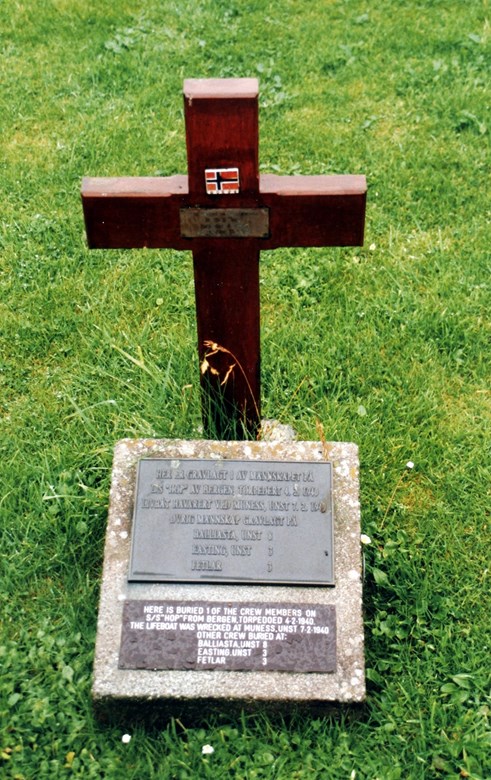 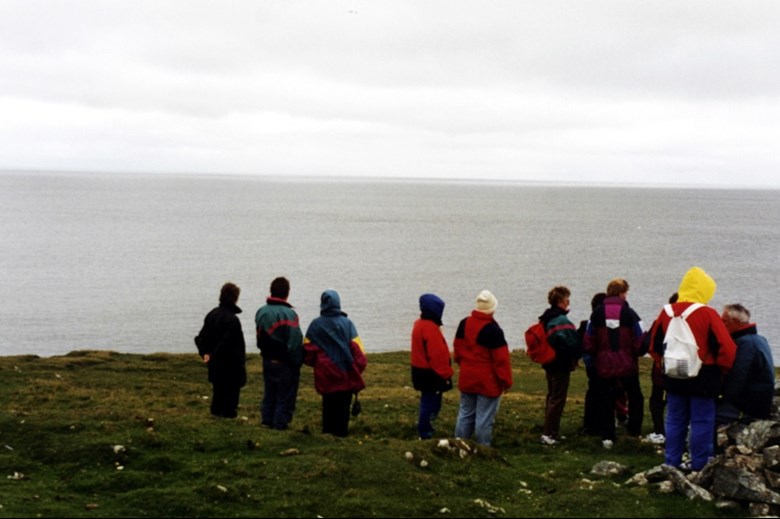 There are still a number of questions concerning the "Hop" wreck. Asbjørn Lutenthun has in cooperation with others looked for evidence for years. He has had good assistance from Robin Hunter, an interested individual on Shetland, and he learned a great deal on Shetland. In Norway, on the contrary, very little has been found. He has approached Bergen Politikammer, Sjøfartsmuseet i Bergen (martime museum), Statsarkivet i Bergen (public archives), and Riksarkivet (national archives), but nobody has been able to help him find research or other documentary evidence concerning the shipwreck. Statsarkivet has found traces of documents in the archives of Bergen politikammer. The correspondence record of the Bergen police headquarters indicates that the case documents were put in a package marked "Ark. Pk. 713". However, this package never arrived at the Statsarkivet. It is "therefore probably .. .lost", Statsarkivet in Bergen assumes in a letter dated 3 October 1994 to Asbjørn Lutenthun.

The crew of the "Hop"

Eight war graves at the Ballista church on the island of Unst. One of them is Kristoffer Lutenthun's grave. The picture was taken on 11 August 1994, on the day a memorial plaque on the church wall was unveiled. The Norwegian flag covers the plaque before the unveiling ceremony.
Owner: Asbjørn Lutenthun - Date: 1994 - Photographer: Ukjend
Asbjørn Lutenthun
1994
Ukjend