The Solveigsæter legend - a dramatic love story across county borders

County and municipal borders have never constituted any barriers or fences between people. People have always had contact across the borders - more or less, and for better or worse. The Solveigsæter legend is a testimony of encounters between people across the county borders of Sogn og Fjordane and Møre og Romsdal, and between the villages of Åheim and Maurstad. This was an encounter with a tragic outcome. 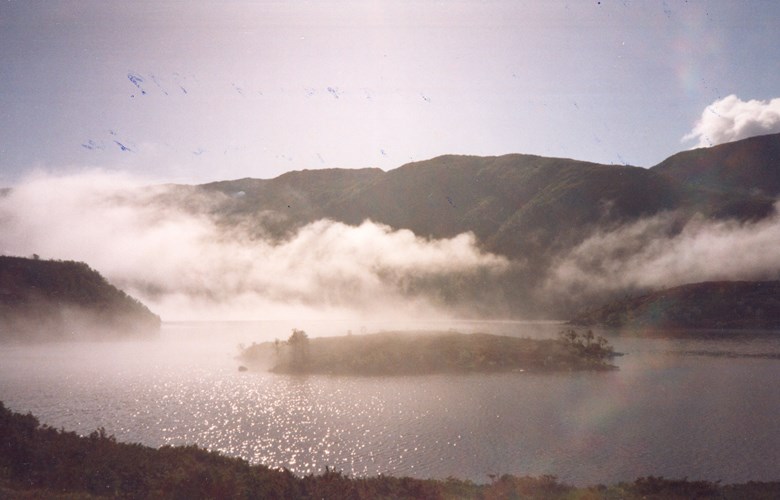 Fog lifting at Movatnet. The picture is taken from Solveigsætra.

There is a red-painted cabin at Solveigsætra, and beside it are traces of former houses.

The Solveigsæter legend is still alive today on both sides of the county border.

The legend as a poem

The poetic version was printed in a special booklet in 1929 with the poem ''Min hytte'' (My cabin), a poem by Jacob Kroken Åheim dealing with a cabin at Solveigsætra called Solveigstova. The booklet was printed in 2000 copies and the profit of the sale would go to Solveigstova.

Duel at the mountain farm

According to the legend, Marius Bakken came riding up to the mountain farm at Movatnet in his finest clothes. He was courting Solveig. Tormod was also present. Marius was sure of his ground, and he assumed that the rival did not have any other choice than to leave. Tormod refused, and it ended in a duel. The fight between the two is described in the seventh stanza (here freely translated).

Tormod fetches from the bushes
a six-feet-long osier
and ties it around the waists
of the two rivals armed with knives.
The first call of cuckoo from the hill
will be the signal when peace is broken,
but cowardly Marius breaks the deal,
and stabs Tormod before the agreed time.

The drama had consequences. It happened that Solveigsætra was haunted. Sometimes people heard strange sounds. The last stanza deals with this, but this was left out in the printed version (here freely translated).

Still in stormy nights,
especially with storms from the west,
you can hear someone quarreling,
and the neighing from a horse
Two male voices can be heard,
a woman sobbing and weeping.
Then a body falls to the ground, -
and then silence, as before.

At Maurstadeidet there are two boundary markers in stone, one fairly new, the other one older. On one side (the south side) of the vertical line, marking the county border, it says: NORD BERG AMT (Nordre Bergenhus Amt, which was previously the name of the county of Sogn og Fjordane fylke until 1918) and NORDF FOGD (Nordfjord fogderi, administrative sub-division of a county). On the other side: ROMSDALS AMT (Møre og Romsdal county), SØNDM FOGD (Sunnmøre fogderi).
Owner: Fylkesarkivet i Sogn og Fjordan. - Date: 2002. - Photographer: Hermund Kleppa.
Fylkesarkivet i Sogn og Fjordan.
2002.
Hermund Kleppa.

".. Recently there was built at the mountain farm / a cabin in memory of those .." These are two lines from the poem "Min hytte" (My cabin) that was published in 1929. The cabin called Solveigstova must therefore have been built a year or two before. The cabin has since been extended and is well maintained.
Owner: Harald Maurstad. - Date: 1999. - Photographer: Ukjend.
Harald Maurstad.
1999.
Ukjend.
resources:
Kroken, Jakob: Solveigsæter-sagnet. 1929.