Oppstryn church is a wooden longchurch situated on the farm of Fosnes in the municipality of Stryn. The church has a seating capacity of 300, and was consecrated on 1 November, 1863 by the dean Wilhelm Frimann Koren. Captain Ludolph Rolfsen made the designs, based on architect Linstow¿s model designs. Oppstryn church is a ¿sokn" church for the Oppstryn ¿sokn" in the parish of Stryn. 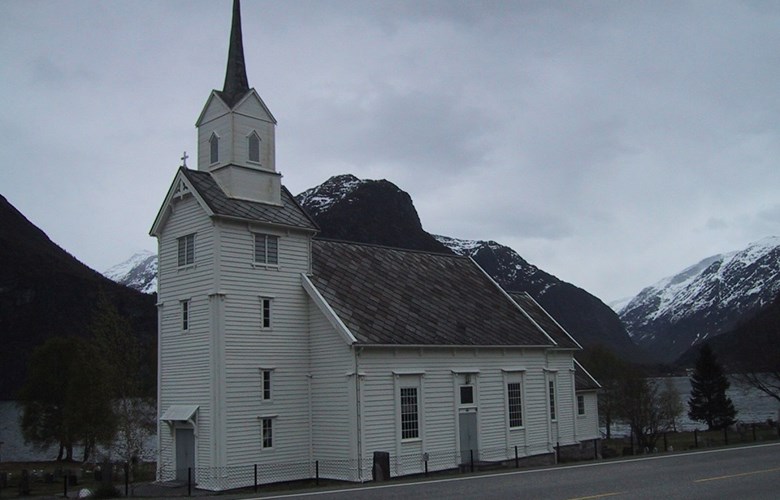 Oppstryn church is situated on the farm of Fosnes on the southern side of the lake of Strynevatnet.

Different from the neighbouring church

Just four years after the neighbouring church of Nedstryn was completed, time had come to consecrate the new church by the lake of Strynevatnet. It is not only a testimony of the strong building activities prevailing in this period, but also proves the willingness of all the households in the area to do their share.

Oppstryn church has a fine location on a flat field down by the lake, close to the main road. The church had the same master builder as the neighbouring church, but the two churches are still different. The interior of Oppstryn church has light walls painted in warm colours - orange, green, and a greyish ochre. The church has a standard porch, placed at the lower end of the turret base. Seen from the outside the steeple has a towering appearance, rising above the gable on the church roof. Further up is a turret neck with roof ridges on four sides. 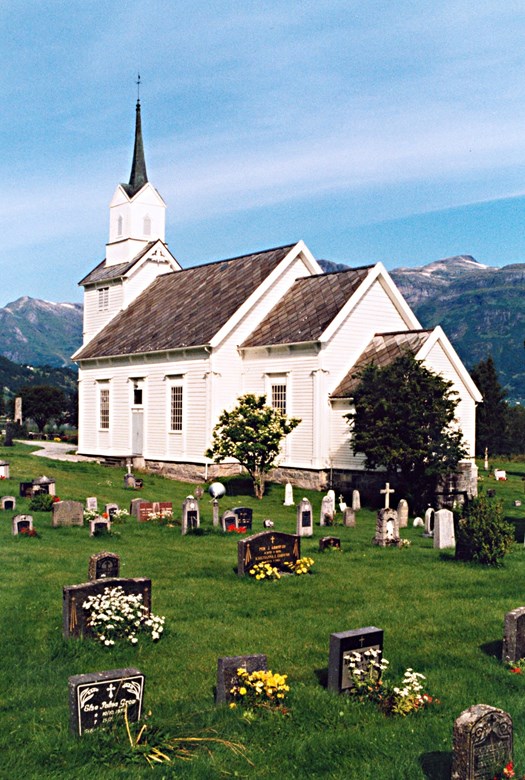 Buried under the floor

In the early 20th century, the flat ceiling was painted white both in the nave and the chancel. The gallery was painted in a pale violet colour with white fields. This colour scheme was also used elsewhere in the interior. For the centenary celebration in 1963, the church was once more renovated, and the ceiling was painted yellow with orange-red beams. The walls were painted in a greyish white, and the pews, the altar rail and the pulpit in shades of red, green, grey, and yellow. For the same occasion, a new vestry was built in an extension to the chancel, and a basement was dug to make room for a mortuary room, a storage room for tools, as well as toilet facilities. During this work, a number of human bones were found, and it is obvious that the custom of burying people under the floor of the chancel and also elsewhere in the church was a common occurrence. As was the case in Nedstryn church, the coffins and graves have been left in peace.

In connection with the centenary festivities, the exterior of the church was renovated, too, and repainted in white. Who can be blamed for the fact that the foundation wall was not solid enough remains unknown, but in 1908, it was discovered that the ground under the turret base was sinking. The whole church was jacked up, and a new and stronger foundation wall was built under the steeple.

As is the case with Nedstryn church, the gallery protrudes along the nave walls, but the corners are not rounded off. The gallery is supported by six solid columns. The nave has an entrance door only on the north wall, with two big windows on either side. On the south wall there are three windows. The most interesting window is the one above the entrance door on the side wall. This window is said to be from the very first church in the village, the old stave church at Nesi.

In terms of the interior, few changes have been made. The so-called chair bench of the vicar¿s wife still stands on the north side of the chancel as it has always done. The chair benches of the sexton and the vicar¿s assistant are placed on the opposite side in the chancel. At present, only the sexton¿s chair is still in use. 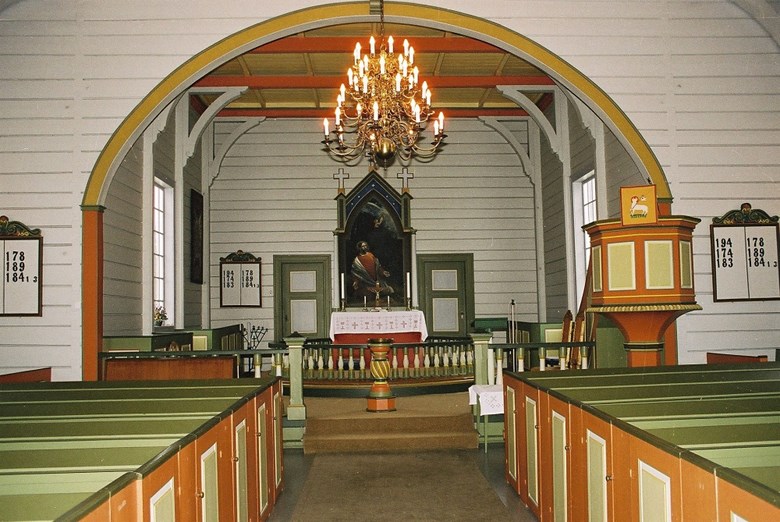 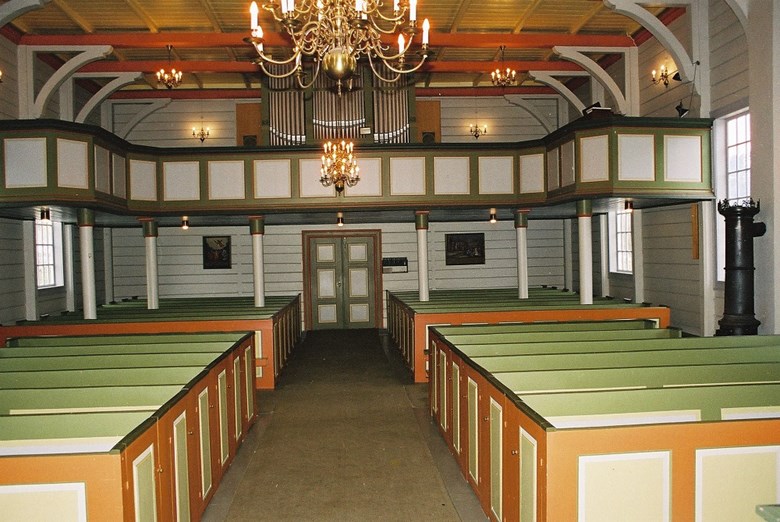 The altarpiece was installed in 1910. It is made by Ferdinand Kierulf Tranaas and the motif is ¿Jesus in the garden of Gethsemane".
On the altar there are four brass candlesticks, two undated from an earlier church, and two from 1975. 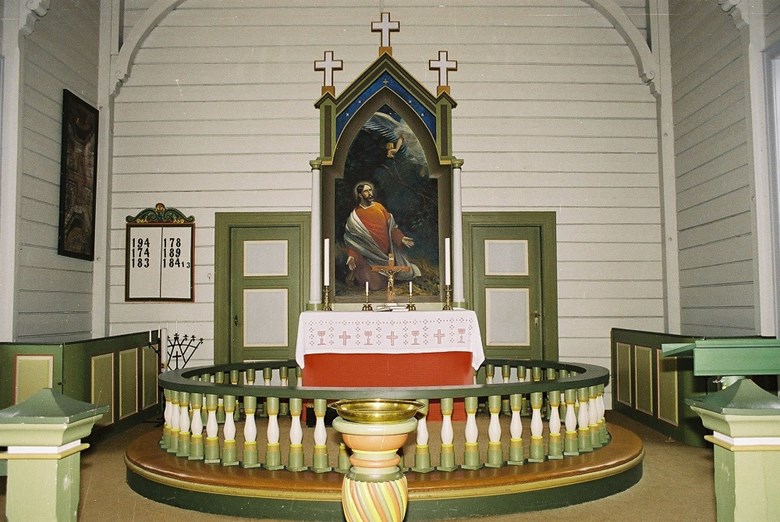 The Holy Communion set in silver in use consists of a chalice, paten, pyx, and wine flagon. A chalice and paten in silver from the 17th century made in a late Gothic style are no longer in use. The chalice is an extraordinary and rare work of art, and is considered to be the finest of its kind in this part of the country. It is very tall, 27.5 centimetres, hexagonal, with a moulded crucifix attached. On the altar there is also a copy of Fredrik II¿s Bible published in Copenhagen in 1589, and eight hymn books from before 1600.

The painting from 1622 was formerly used as an altarpiece. It is considered to be of inferior quality, even if it was taken into the new church. The picture is a copy of a painting by Carlo Doliez "Christ blessing the bread". On the back it is written ¿Olaus Petri Hjolstrensis 1622".
The bench from before 1600 may have been part of an altar from the stave church standing on this site until 1662. The alms pouch on a rod with a bell is from an earlier church. The door from before 1600 is exhibited on the porch wall.
The painting from 1704 portrays "Jesus in the garden of Gethsemane", and the painting from 1714 depicting ¿ ¿The ten virgins" (Matthew 25;1-13), are both painted by Jørgen Clausen Berge.

There are two church bells. One dates from 1702, but may be a recast from an earlier bell. It has the Latin inscription "Soli Deo Gloria" (Glory to God alone) and "F4" (Fredrik IV). The second bell probably dates from 1863. 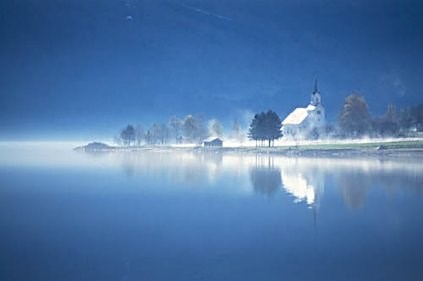 The altarpiece has the motif 'Jesus in the garden of Gethsemane'. It was painted by Ferdinand Kierulf Tranaas and was installed in 1910. On the altar there are four brass candlesticks, two big and two small ones. The octagonal font and the brass baptismal bowl both date from 1862. To the far left is the painting from 1622 which for some time served as an altarpiece.
Owner: Stryn fellesråd. - Date: 2003. - Photographer: Svein F. Rønne.
Stryn fellesråd.
2003.
Svein F. Rønne.

From the interior of the nave seen towards the chancel. For the centenary celebration in 1963, the church was renovated, and the ceilings were then painted in yellow with orange-red beams. The walls were painted in a greyish-white colour, and the pews and the altar rail in shades of green, grey, and white. The pulpit is pentagonal on an octagonal base.
Owner: Stryn fellesråd. - Date: 2003. - Photographer: Svein F. Rønne.
Stryn fellesråd.
2003.
Svein F. Rønne.

From the interior of the nave seen towards the gallery and the porch. After the 1963 renovation, the gallery was painted in shades of red, green, grey and yellow. The organ dates from 1913 and has five registers. It was built by 'Olsen & Jørgensen', and is a gift from emigrated people from this village to America. Under the gallery hang two paintings from the early 18th century.
Owner: Stryn fellesråd. - Date: 2003. - Photographer: Svein F. Rønne.
Stryn fellesråd.
2003.
Svein F. Rønne.