Nordal church is a wooden longchurch located on the farm of Nordalen far to the north-east in the municipality of Flora. The church, which can seat 200, was consecrated on 14 September, 1898 by the dean Andreas D. Jespersen. The architect Jacob Wilhelm Nordan made the designs. Today Nordal church is a ¿sokn" church for the Nordal ¿sokn" in the parish of Kinn. Nordal was separated from the Bru "sokn" on 1 January, 1998. 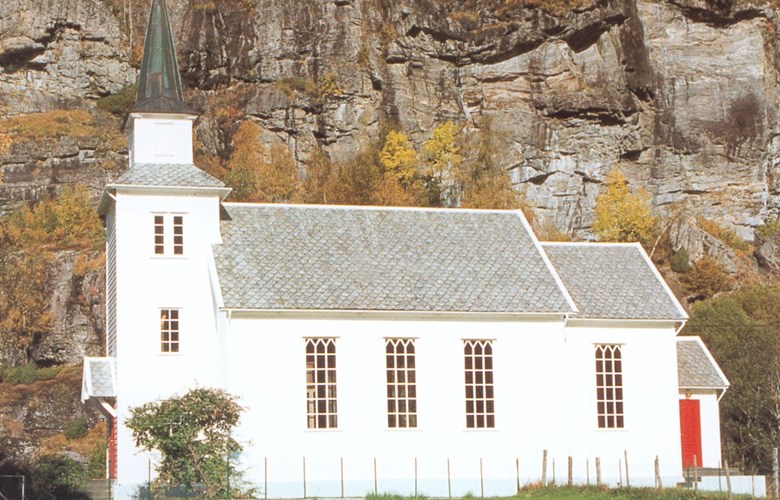 Nordal church was the very last 19th-century church built in this county. It was designed by Jacob Wilhelm Nordan who designed nine churches in all in the county.

The great church-building period towards the end of the 19th century was completed with the building of a new church in Nordalsfjorden in 1898. This was church number 50 in 50 years in the county, and Nordal church was very similar to most of the others. It is a simple, white-painted longchurch built in cog-joint logs with horizontal panelling. The church thus marks a dignified conclusion to the most active church-construction period in the county in recent times. In addition, it represents the end of a hectic church-building period in the parish of Kinn. In 1866, the municipality of Kinn bought the church at Kinn, in 1873, a new church was built at Stavang, the following year Eikefjord church was thoroughly renovated, and, in 1882, the church in the city of Florø was completed.

The people of Nordalsfjorden had for a long time belonged to the ¿sokn" of Svanøy, which meant an extremely long and strenuous way to get to church. From the upper parts of the valley of Grøndalen down to the fjord it was a distance of 20 kilometres (about 12 miles) and five lakes had to be crossed by boat on the way. From Solheimsøyra to the church at Svanøy it was another 40 kilometres (about 24 miles), which took about four hours by row boat, if the weather was fine, that is. They had to go all the way to the Svanøy church, not only for ordinary services, but also for christening ceremonies, weddings, and funerals.

The road up to Grøndalen was not completed until 1954, in 1966, a new car-ferry connection to Bjørnset was introduced, in 1977, a new road to Haukå was finished, thus shortening the ferry crossing, and then finally in 1987, the bridge across the Nordalsfjord was opened and the village was linked to the national road network.

From 1873, the people of Nordalsfjorden belonged to the new church at Stavang which was closer, but it was still a long way to travel to church. Some progress was made in connection with the change of church site from Svanøy to Stavang, when it was decided that the people of Nordalsfjorden would get their own graveyard at Floten, a short distance to the west of the present Nordal church site. The graveyard was consecrated on 17 November, 1869. Later on the graveyard was extended in 1912 and 1938.

A church of their own

The very first time the issue was raised of building a church of their own at Nordalsfjorden was in 1887, and two years later the decision was made to get started on the project. The people in the valley had raised 2000 kroner, and the same sum was allocated by the Norwegian Parliament (Stortinget) and the municipality of Kinn. The savings bank of "Kinn Sparebank" donated 1500 kroner, so the total sum raised was 7500 kroner which was enough to cover the construction costs. At first the vicar was somewhat reluctant to a new church building because this implied that he would have to travel more frequently. Furthermore, when the church was completed, he tried to confine the services to the summer months, but the ¿sokn" council objected. In the first years, services were held five times a year, preferably in the winter. Nowadays services are held fourteen times a year.

The new church site at Nordalsfjorden was located on the farm of Nordalen, the flat, green peninsula by the fjord. The site where the graveyard was located was not deemed suitable enough for a church site. In those days, funerals were usually ministered in the homes before the coffins were taken to the graveyard. In more recent times after the church was taken into use for funeral ceremonies, a bridge was built across the river separating the church site from the graveyard. 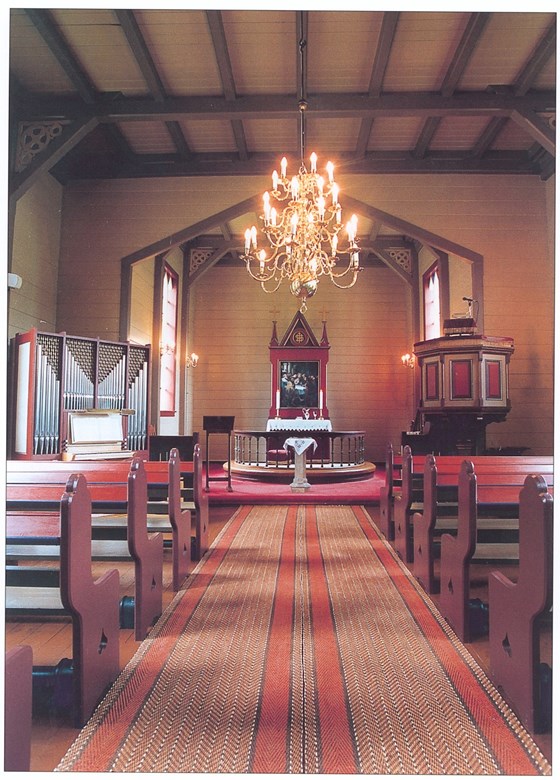 The architect J. W. Nordan was much used as a church architect, and in this county he had designed the churches at Helgheim (1877), in Florø (1882) and in Førde (1885). He was approached and produced designs that were approved by the Ministry of Church Affairs in 1896. The construction work was started the following year and local inhabitants put in a lot of voluntary work. For example, the villagers provided stones for the foundation wall, as well as transporting building material from Høydalsfjorden. The church had a seating capacity of 250, which was more than enough for a village of 325 inhabitants. Today the church has even more ample space with one seat per inhabitant.

Nordal church has always been painted white. The interior was originally painted in a pale colour, late on in blue before its present colours after the restoration work in 1984. The walls are painted beige and the mouldings brown both in the nave and the chancel. At the same time, grooves were cut between each log to prevent the paint from cracking. Electric lighting and heating was installed in 1964, and, in 1994, automatic bell ringing was installed, too.
Even if Nordal is both a young church and a young church site, at least they have a souvenir of the old church site at Svanøy; the small dish which is still in use. This stems from the old church at Svanøy which was torn down in 1872. Most of the other old interior from this church was lost in the fire of Stavang church in 1951.

Nordal church got its first organ in 1937, and until the 1970s most people were satisfied with the old organ from "Jakob Knudsen orgelfabrikk" in Bergen. However, in 1981, people started raising money to buy a new organ. Through various fund-raising activities 135 000 kroner was raised, and in April, 1983, the ¿sokn" council ordered a new organ at a price of 214 000 kroner from ¿Eystein Gangfløt orgelbyggeri" in Fredrikstad. In good faith the "sokn" council as agreed paid two thirds of the sum in advance; 170 000 kroner. In October, 1984, they could read in the newspaper that the organ builder was bankrupt. All their advance payment was lost, and to make matters worse, the organ had not even been started on.

The good people of Nordalsfjorden immediately started on a new fund-raising drive, and managed to get municipal security for a loan of 150 000 kroner. As early as 27 May, 1985, the church got a new organ, this time made in Denmark.

The altarpiece from 1898 has a classic motif: 'Christ's institution of the Holy Communion'. The painter who made the copy is unknown. The portrayal is fairly close to the copperplate engraving by Boëthius Bolswert, thus belonging to the Rubens tradition. On the altar there are two brass candlesticks from 1898. The Holy Communion objects consist of a chalice from 1898 and an undated silver dish from the old church at Svanøy. The holy water ewer was originally used as a wine cruet, and it is a gift from the military officer Nordal.
Owner: I <i>Nordal kyrkje 100 år - "Glimt frå kvardag og helg".</i> - Date: 1998. - Photographer: Arne Stubhaug.
I <i>Nordal kyrkje 100 år - "Glimt frå kvardag og helg".</i>
1998.
Arne Stubhaug.