There is a relatively high occurrence of textile tools in the finds at Ytre Moa. With our knowledge of grazing conditions, finds of tools for gathering of fodder for sheep and the historical use of the area, the many textile tools have been interpreted as an indication that textile handicraft played a very important role in the region in the Viking Age. What kinds of tools have been found and what do we know about the process of textile production? 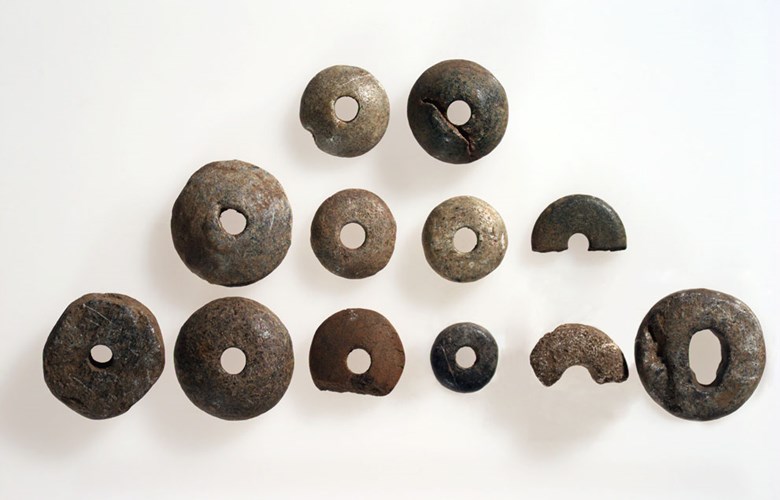 Whorls from Ytre Moa. The whorls are made of different types of materials, and they vary in weight and size. The size of the holes also varies. Whorls of this type can be dated to the Iron Age / the Middle Ages. (Photo: The County Archives of Sogn og Fjordane).

In the younger Iron Age textile tools are one of the most common and numerous of object categories besides weapons and imported objects and artefacts from the British Isles and the continent. Textile tools are commonly found in graves from this period, but also in house sites. At Ytre Moa textile tools have been found in most of the house sites, but not in the excavated graves. However, it must be added that in one of the graves at the Moa farm, just to the east of Ytre Moa, textile tools in the form of loom weight and wool comb were found in a grave from the younger Iron Age.

Spinning and weaving were necessary activities, for example to provide fabrics for clothes and sail for boats. The most common activity was spinning wool, but flax and nettles fibre were also used as raw materials. Wool fabrics were made for garments for various uses, as well as fabrics which later were wetted to make frieze (tova) or brushed to make the material softer (loa). Textiles from other parts of the country from this period which show that they could weave fabrics with patterns, embroider and use various plant dyes to embellish the textiles.

In the category of textile tools there are a number of different tools, such as loom sword, loom weights, wool comb / flax hackle, whorls, needles made of bone or metal, needle cases, seam smoothers and scissors. In addition, we find remnants of tablet (card) weaving, loom comb, but also flax mallets (used in the process to dress the fibres in the flax plant so the linen could be used in weaving). Wool was dressed by means of wool combs or hackles with iron tines. The yarn was spun by using drop spindles where the whorls were used as weights. For the weaving, frequently carried out on a warp-weighted loom (an upright loom), loom swords were used to beat down the threads. The textile tools found at Ytre Moa include 14 whorls, 10 loom weights, a vevreell (weaving batten?) and four pairs of scissors. The scissors are of a type that had been in common use in the Viking Age, and they have most likely been used in connection with the production of textiles and clothes. A pendant whetstone has also been found, and it is natural to include this in the category of textile tools as it was often used to whet needles.

The whorl was the most common textile tool from the younger Iron Age. This was also the case at Ytre Moa. The whorl forms part of a drop spindle used to spin wool and linen. The spindle is a thin shaft with a small hook on top. The shaft was inserted into a hole in the whorl to ensure a steady motion when the wool was twined to make thread. A whorl can be made of stone, bone, wood or burned clay. Of the 14 whorls found at Ytre Moa, one is made of mica schist and one of phyllite, whereas all the rest are made of soapstone. These whorls vary in form – some have a slightly arched upper side and are flat, or slightly concave underneath. Others are formed like discs, and one has an oval contour. The weight varies between 10 and 40 grammes. The weight of the whorl decides how thick the thread could be spun. The heavier the whorl, the coarser the thread. Research on prehistoric textile production has shown that whorls weighing between 25 and 35 grammes have been most common in the spinning of wool from the old Nordic short-tailed sheep.

At Ytre Moa 10 loom weights have been found, complete or in fragments. These have been used to tighten the warp in the so-called Opstadvev –warp-weighted loom – an upright loom leaning against a wall. Besides the Opstadvev, tablet weaving and tape weaving methods were used until the table loom was introduced in the Middle Ages. The form and size of the loom weights found at Ytre Moa vary, but most are oval or with an approximate triangular contour, weighing between 300 and 400 grammes. All of them have had holes at one end. 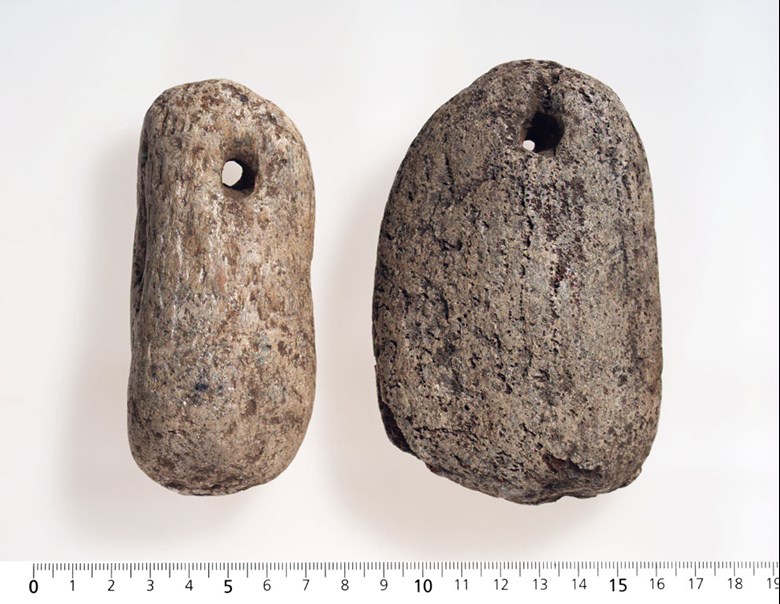 Textile production – in everyday life and in mythology

A number of experts are of the opinion that textile production has mainly been woman's work. This view is partly based on grave finds, where textile tools have predominantly been found in women's graves. Ethnographic and historical sources from these areas also corroborate what the experts maintain. On the other hand, it is far from uncommon to find textile tools also in men's graves, frequently alongside weapons such as swords, arrowheads and spears. Weaving and spinning are also known from Old Norse literature and the mythological universe of the Viking Age. Best known are perhaps the three Norns – virgin goddesses – Urd, Verdande and Skuld, representing the past, the present and the future, respectively. These three Norns spun and wove the threads of life and the destiny of man. In the mythological universe weaving and spinning are often combined with the cultic, in connection with ritual ceremonies.

Loom weights from Yter Moa. The stones were used to tighten the warp on the upright loom. (Photo: The County Archives of Sogn og Fjordane)