Bernhard Færøyvik from Solund was one of our most prominent vessel historians. He was a pioneer as well as an adviser in drawing and visualizing the oldest boat and sea culture of the coastal communities. 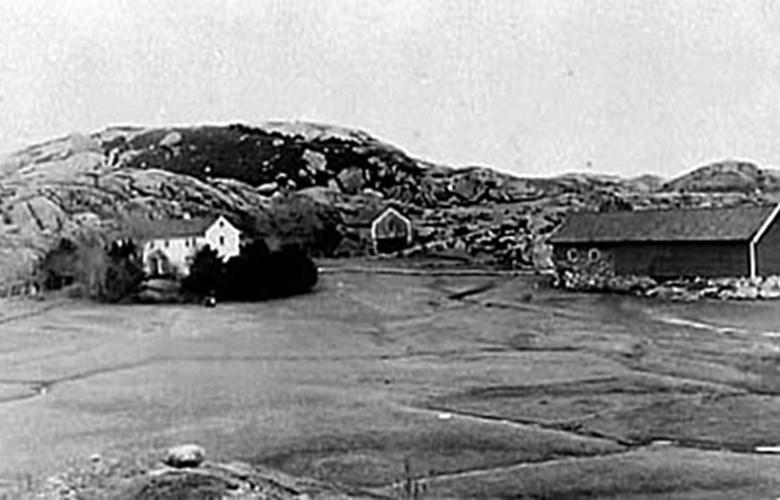 The farm of Færøyvik as it looked until the residential house burnt down on Christmas Eve 1955.

Bernhard Andreas Færøyvik (1886-1950) grew up on the farm of Færøyvik in the north of Solund. His childhood home offered many-sided activities on land and in boats for the eight children. Although the farm was one of the biggest in Solund, their main income came from fishing. Bernhard had even taken part in the fat herring fisheries when he graduated from Hambro secondary school in Bergen in 1909.

His father thought that university science studies were too expensive, so Bernhard took a one-year course in teaching at Volda. Then he was a teacher in the secondary school, first at Volda, then in Bergen. He also attended the lower military academy, was on border control during both world wars, was a prisoner of war for a time during the Second World War, and became the commander of the Fjell fortification during the liberation in 1945.

In Færøyvik's adolescence, the engine had taken over in the fishing vessels, and boats built for oars and sail were gone. He saw that time was short in putting to paper the coastal cultural heritage, and thus the study of the Norwegian boat and sea culture became a lifetime mission for him. He became a strong advocate for the museums to take care of countryside vessels and other objects of the sea culture. He started to measure and make designs of old boats, sloops, and tools used by boat-builders.

A number of scientists were caught by his ideas and supported him in various ways. From 1925 onwards, he was awarded annual scholarships from research and scientific institutions, and a later allocation by the Storting (Norwegian Parliament) made it possible for him to take more time off from school work and do research.

In 1947, Færøyvik became an assistant curator of the Norske Museers Landsforbund (Association of Norwegian Museums), the maritime department. In addition to his research work, he gave advice to a number of museums in questions concerning the collection of boats and objects, and he helped establish what today is called Hordamuseet (museum). He collaborated closely as well with Norsk Folkemuseum (museum)at Bygdøy in Oslo, and he sent them boats of different kinds which he found on his travels. These boats were later taken over by Norsk Sjøfartsmuseum (maritime museum), where several are exhibited today. Copies built from his designs could with time be seen in a number of museums around the country. For example, Bergen Sjøfartsmuseum (maritime museum) has a fine collection of copies of boats and sloops found along the coast from Bergen to Nordland. 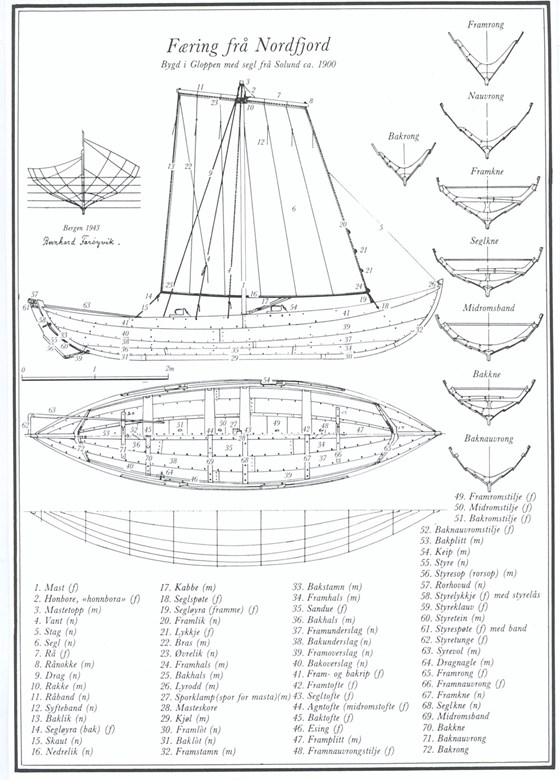 Comprehensive contributions to history of vessels

Færøyvik also studied boat types in Sweden, Finland, and on the islands in the North Sea. In 1950, he was on a study tour to Shetland. That same year he suddenly died, in the middle of very productive work. He left quite a contribution to Norwegian boats history. Three papers, meant to be a more comprehensive study, were unprinted. There were no less than 56 notebooks full of sketches and designs of boats, 350 drawings of big and small vessels, more than one thousand pictures, and this is only some of the material. His wife, Aletta, who was also a teacher, was a faithful collaborator in his research work. She took care of the extensive collection he left, put it in order, and prepared it for "Bernhard Færøyviks samlingar (the Bernhard Færøyvik collections)".

Passed on his knowledge to others

Fishermen and history writers along the Norwegian west coast has found much information from the first "Fiskarsoga for Sogn og Fjordane 1939 (history of fishermen of the county of Sogn og Fjordane)". Færøyvik edited this book and wrote himself the section on the boats used in fishing. In newspapers and magazines people could find pleasure in comprehensive explanations and articles about different boats along the entire coast, all careful scientific work embracing Norse times to the engine age. Based on this material, his son, Øystein Færøyvik - after Bernhard had passed away - wrote the book "Vestlandsbåtar. Frå oselvar til sunnmørsåttring (boats of the west coast. From simple rowboat to the Sunnmøre eight-oar vessel) ", which is the fifth volume of the collection "Norske båtar (Norwegian boats)".

Bernhard Færøyvik came to live in Bergen with his family most of his life, but he was away a great deal on research travels. His writings give evidence of a keen advocate of "nynorsk" (new Norwegian based on dialects) and a confident, prolific author.
Owner: I <i>Vestlandsbåtar.</i> - Date: 1932. - Photographer: Øystein Færøyvik.
I <i>Vestlandsbåtar.</i>
1932.
Øystein Færøyvik.

The Eidsvoll boat had its name after the five representatives who, on their way to Eidsvoll from Bergen in 1814, were taken to Lærdal on this boat. The crew on the three-day voyage consisted of two servants, ten rowers, and a mate. They had with them as well two "luggage boats" with a crew of ten.
The Eidsvoll boat is believed to have been built on Svanøy, where Nagel was the tax collector.
Owner: I <i>Vestlandsbåtar.</i> - Date: 1941. - Photographer: Teiknar: Bernhard Færøyvik.
I <i>Vestlandsbåtar.</i>
1941.
Teiknar: Bernhard Færøyvik.