The fishing village of Torskangerpollen

On the western shores of the island of Vågsøy, in the innermost part of the bay of Kvalheimsvika, where it tapers off and turns south, the fishing village of Torskangerpollen is located. From the mid-19th century, people came from all over the region of Nordfjord to take part in the winter cod fisheries. Many warehouses and boathouses were built, or ocean cottages as they often were called. The characteristic fishing village still exists, but the ocean cottages are no longer used by fishermen. 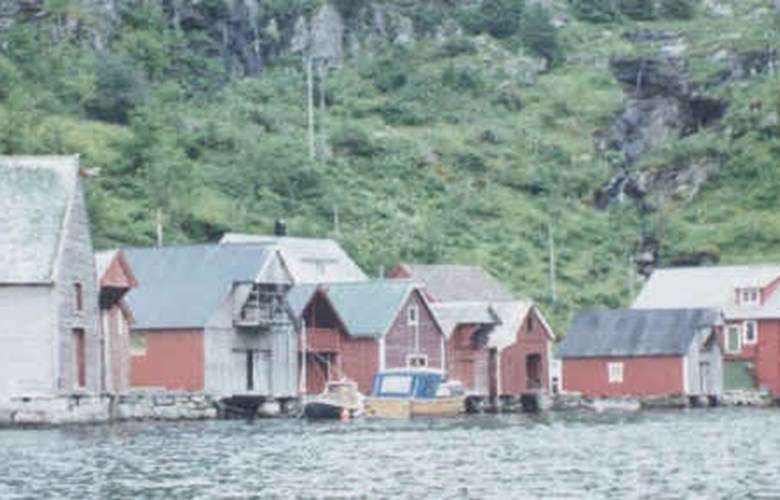 The first ocean cottages proper were built in 1863 and the following years. The picture shows some of the warehouses at Torskangerpollen the way they look today.

The bay of Kvalheimsvika and the smaller bay of Torskangerpollen were the best fishing grounds in the area in terms of cod fisheries. Almost annually the cod came in huge shoals and people from Sunnmøre and the whole region of Nordfjord rushed to these places to take part in the fisheries. Many had their own boat crews, whereas others were employed by the local boat owners. In the fishing season many boat crews from the inner parts of Nordfjord were stationed at Vågsvåg and Torskangerpollen. They had their own houses that they called ocean cottages, but there were some who lodged with the locals. In the years when the fisheries were regular and good, many people from Nordfjord owned their ocean cottages on rented ground or by time-honoured rights. For some years there was a high number of these temporary inhabitants.

The earliest record of such a lease known from Vågsøy is written by Peder P. Bang on 6 September, 1756, to Rasmus Josephson and included house, boathouse, and a parcel of an outlying field on the Våge farm. Torskangerpollen is a part of the farm of Våge. The most recent lease is written as late as 1914-1915. This latest lease was written to a boat crew from Alsåker and Hundeidet in the municipality of Eid for a lease of a site for an ocean cottage and boat landing at Myrestrand in Torskangerpollen. The site measured nine by five ells (approx. 18 by 10 feet) with a boat landing on the south side and a platform on the north side. The annual ground rent was eight kroner.
However, it was the merchant at Vågsberget, Peder P. Tonning (1738 - 1811), who in earnest started the development of the fishing village of Torskangerpollen. In the period between 1772 and 1784 he wrote leases for the sites of seven ocean cottages, maybe even more. His estate of 1812 wrote four more leases. His successor at Vågsberget continued this system of leases, and in the period between 1812 and 1823, it was said that 20 sites for ocean cottages were leased, most of them to boat crews from Eid. The content and terms of these lease records are very similar, and the proprietor usually waived his pre-emptive right to buy the houses.

The oldest ocean cottage known in Torskangerpollen is the one built by the brothers Anders and Ingebrigt Kråkenes in 1863. It was a warehouse with lodging facilities upstairs. There had been boathouses, sheds and warehouses here before 1863, but this was the first to include lodging.
In the period between 1890 and 1920, incredibly rich cod fisheries took place in the bays of Torskangerpollen and Kvalheimsvika. The number of ocean cottages increased rapidly throughout this period, and in the early 1920s, there were 46 warehouses, eight boathouses, and 20 private houses with outbuildings at Torskangerpollen. In the 1920s, the annual fisheries became gradually poorer, and the number of non-local fishermen decreased dramatically. After this decade, there have been no good cod catches in Pollen. The warehouses and the ocean cottages remained unused and without anybody to look after them properly. The whole village went into a period of decline, and today we find many moss-covered foundation walls to show that this was a place with many ocean cottages, warehouses, and boathouses. On the other hand, some of these ocean cottages have been taken care of and maintained. They remind us of bygone days - an important chapter in the history of our local fisheries.

Some of the ocean cottages are let to tourists on fishing holidays, whereas others are used as a treatment centre for young people with drugs and alcohol-related problems. The Måløy commune is privately owned, and forms part of the Klokkergården foundation, with its headquarters at Arneberg in the county of Hedmark. The commune accepts children and teenagers with behavioural problems, and seven youngsters stay here at any given time.

There is still some fishing activity in the bay of Torskangerpollen, but it can hardly match what it was like in the period between 1890 and 1920. Here we see a row of warehouses, ocean cottages and boathouses seen from the innermost part of the bay with Kvalheim in the background.
Owner: På internettsida www.fichtenbuck.de. - Date: Ca. 2000. - Photographer: Ukjend.
På internettsida www.fichtenbuck.de.
Ca. 2000.
Ukjend.

Nowadays some of the ocean cottages are let to tourists on fishing holidays. Others are used by the Måløy commune, a treatment centre for young people with drugs and alcohol-related problems.
Owner: R. Myre. - Date: Ca. 2000. - Photographer: R. Myre.
R. Myre.
Ca. 2000.
R. Myre.