<b>The farms on the mainland between Florø and Midtgulen had to wait for a long time before they got any road. Up until 1993, people in this area did not have any road connection to their own municipal centres or to the main road network. Communication by boat was the only alternative. This road was built bit by bit, and the final part of the road was completed in 1993.</b> 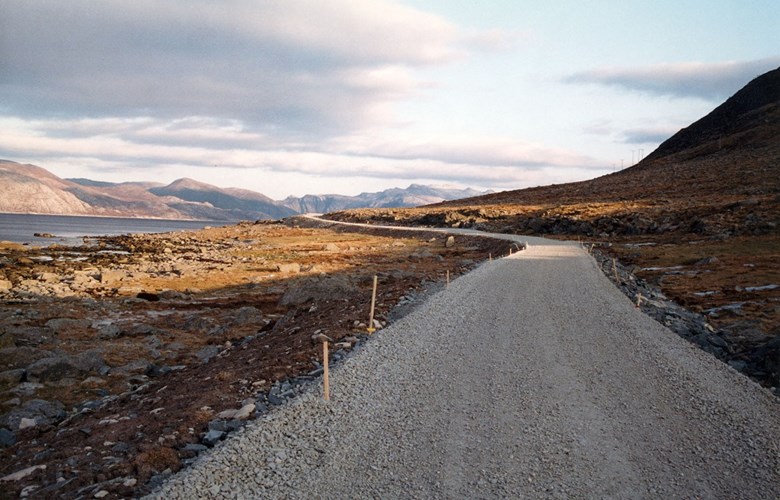 The last section of the road between Sagebø and Botnane was completed in 1993. The 13-kilometre-long new road between Sagebø and Botnane had a road width of four metres. The road is dimensioned for a maximum speed limit of 60 km/h. The total cost was NOK 22.8 million. "Landbrukets Utbyggingsfond" (The Agricultural Development Fund) covered NOK 1.275 million; the rest was split between state and county authorities.

Just "peaceful and relaxing"?
"Living in an outlying district with the boat as the only transportation alternative, may seem both peaceful and relaxing seen from the outside. But what this really means along an exposed coast in all kinds of weather can only be understood by people who have first-hand experience of this". This was written by Olav Handeland in 1993 in Vegstubben after the last section of the road between Villevika and Midtgulen was opened for traffic. Building roads to isolated villages has not always gone quickly enough for the people who lived there.

Unfortunate circumstances
In the 1980s, the road Villevika-Årebrotet-Sørbotnen was completed. From Villevika there was a connection by boat to Florø. The work on the section between Årebrotet and Sørbotnen (12 kilometres) was undertaken by a contractor who went bankrupt in January 1987. According to the contract, the road should have been completed in August 1986. The remaining work on the road could not be done in the winter months, so the construction work was not started up again until spring. In July 1987, the road was completed.

Narrow road, but good enough
The road building led to optimism and better future prospects, even eif the road was built as a single-lane road. Many residents in the area could now commute. The farms were generally too small to make a decent living. There was still hope that the area could be linked to the main road network (RV 614). Several alternatives were planned: either a road from Årebrotet to Klauva in the Norddalsfjord, or a good ferry quay at Villevika. The alterantive they wanted most of all was to get a road between Nordbotnen and Sagebø (Bremanger municipality). This would mean that the isolated farms there would get a road, as well as a connection to the highway for everybody all the way from Villevika.

The last section: Sagebø-Botnane
The last alternative was chosen. In August 1992, the work on the road Nordbotnen-Sagebø, or Sagebø-Botnane as the construction work was called. At a cost of NOK 23 million, 13 kilometres of new road was built. The opening took place on 11 December. At the opening ceremony, the chairman of the county council said that it was a superior objective that people could build homes and live where they belonged and had their roots. At Botnane, people have proved that a road is a positive future investment. Before the road was built there were 27 permanent residents. In 1993, the number had increased to 42. 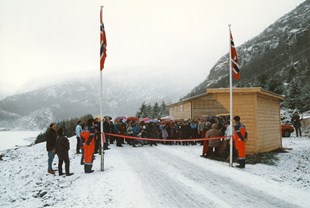 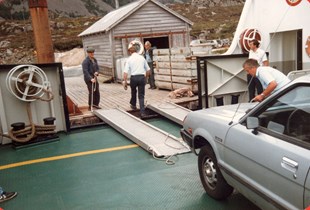 More freedom with a new road
The whole road connection from Villevika to Myklebust, the crossroads to RV 614 at Midtgulen, is 44 kilometres long. In 1989, the road between Myklebust and Breivik (37.4 kilometres) was reclassified as county road 577. From Breivik to Villevika (6 kilometres) the road connection is municipal. It does not really matter what kind of road classification that is used; what is more important is the fact that people who live along this road can now go by car like most other people in the country. Before they had to make do with boats.

Breaking out of isolation is all-important for a local community to grow and people to feel happy. This we are always reminded of when a new road is opened for traffic. Knut Gulestøl wrote a prologue for the road opening in 1993, and the following lines is an excerpt:

(freely translated): To me the scissors and the ribbon are but a ceremony, unless the words can be linked to the memories of bygone days. On yellow pages in my memory book I have written with a child's handwriting, about the woman who walked with her knitting in the rough terrain and on weather-beaten tracks along the shores, where the new age has chiselled a road, the most beautiful artery. A dream has come true for you and me, and for all our families and generations.