In the former municipality of Sør-Vågsøy, 17 men and women died in wartime actions during the Second World War. 16 of these lost their lives due to war actions at sea, whereas one died in a German prison camp. On 17 May 1946, a memorial stone was unveiled at the marketplace in Måløy. 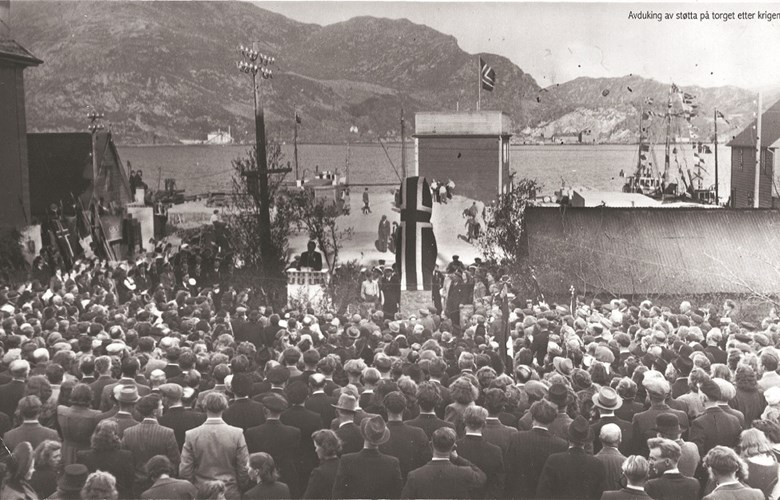 From the unveiling ceremony on 17 May 1946. The statue is covered in a flag and the podium is decorated with birch branches.

The memorial stone in Måløy is located at the marketplace at the entrance leading up to the main street - Gate 1 - "in the heart of Måløy." The inscription is written on the side facing the street. The names of the 17 persons are written in alphabetical order. Underneath are inscribed the words from Nordahl Grieg's poem 17. mai 1940:

Here we shall remember the dead,
who gave their lives for our peace,
the soldier in blood on the snow,
the seaman who drowned. 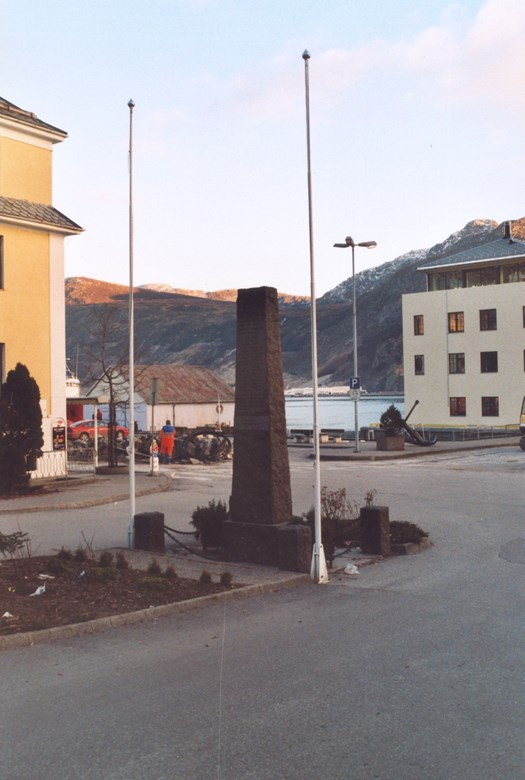 A huge crowd had turned up for the unveiling ceremony on 17 May 1946. The chairman of the memorial committee, police sergeant Trygve Tomasgård gave the main speech. The following is an excerpt from his speech:

The men and women from Sør-Vågsøy who died due to wartime actions will today be remembered and honoured by the unveiling of this memorial stone. It has been erected to commemorate them and their efforts and sacrifices. They all died in the fight for Norway's freedom, either by sacrificing their lives in active service abroad and at home, on the battlefield, at sea, in German imprisonment, by terrorist acts, or in other ways where the freedom struggle demanded its sacrifices.

Today, on our day of freedom, 17 May, we remember those who died, bearing in mind what freedom means to a people, and what the fight for freedom has cost, in terms of sacrifice, suffering, and grief. From 9 April 1940 to 8 May 1945 - for five war years - we learned what it meant to be without freedom and live in slavery and under foreign occupation.

After unveiling the memorial stone, the speaker called down peace on the dead. People took off their hats and observed a two-minute silence.

The mayor Nystad then took over the memorial stone on behalf of the municipality. He said:

It will be a pleasant duty for the municipality to take care of this monument. The sacrifices made by these dead men and women are an obligation to all of us to remember them in deep gratitude. The memorial stone shall be a visible sign and symbol for the posterity and urge us to new efforts whenever the situation demands it. 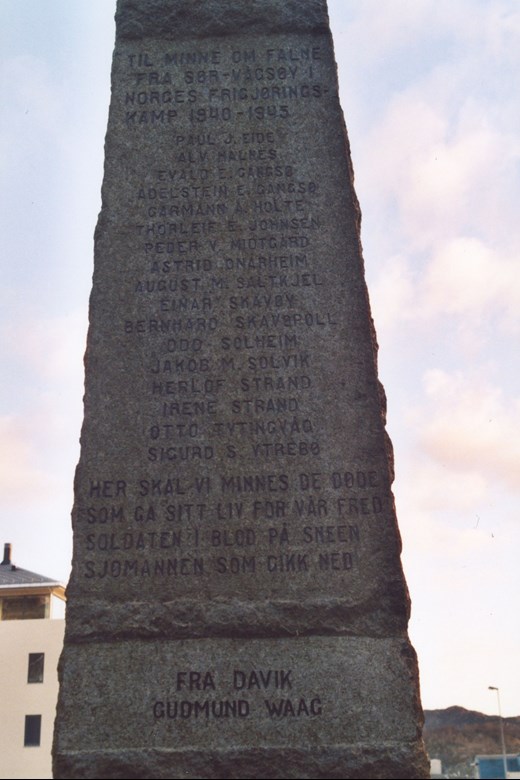 Biographies in the book Våre falne

EIDE, PAUL MARGIDO, canning worker, Sør-Vågsøy. Born 17 March 1920 in Kristiansund, son of Johan I. Eide, born 1890 at Eide på Nordmøre, and Josefine Pauline née Paulsdatter, born 1898 at Bremsnes. Before the war worked in the canning industry, but after war broke out, worked as a stoker on SS Bjørnungen which was torpedoed on 6 October 1941 between Kirkenes and Honningsvåg. The whole crew perished.

GANGSØ, EVALD E., mate, Sør-Vågsøy. Born 7 September 1920 in Sør-Vågsøy, son of Enock Gangsø, born 1884, and Lisa née Kvien, born 1890. Training ship course and mate school. Worked as ordinary seaman on SS Bjørnungen, and died on 6 October 1941, when the ship was sunk between Kirkenes and Honningsvåg. His brother Adelstein died in 1943.

HALNES, ALF, seaman, Sør-Vågsøy. Born 6 May 1920 in Sør-Vågsøy, son of Sigvald Halnes, born 1896 at Davik, and Fina née Hansen, born 1897 at Tjøtta. Worked as a donkeyman on a coastal steamer before he left for England during the Måløy raid in 1941. Joined the allied merchant marine. Died on 28 December 1942 in the North Atlantic when SS Norse King was torpedoed. 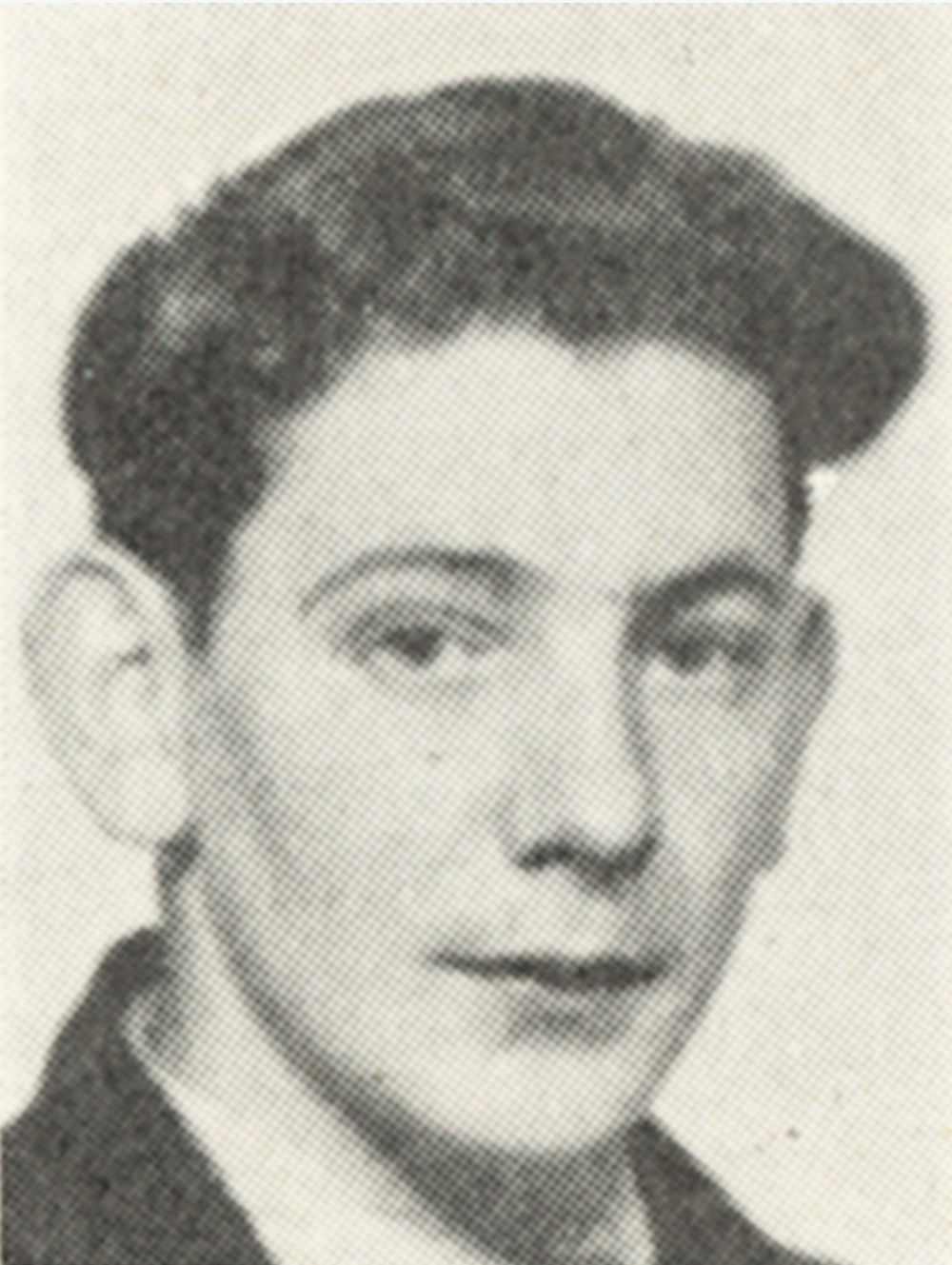 JOHNSEN, TORLEIF EMIL, steward, Sør-Vågsøy. Born 8 April 1917 in Stavanger, son of Johan Kornelius Johnsen, born 1882 in Stavanger, and Tomine Talette, née Paulsen, born 1886 same place. Married 1940 in Bergen to Nancy Adelaide Blålid, born 1923 in Sør-Vågsøy. One child. Training ship course, technical evening school, steward school. Worked as a cook on the destroyer Troll from September 1939 until the capitulation in Norway in 1940. Afterwards sailed as a steward on MS Store-Bill until he was killed onboard on 20 July 1942 during a bomb raid on Honningsvåg.

MIDTGÅRD, PEDER ANDREAS VILHELMSEN, ordinary seaman, Sør-Vågsøy. Born 14 September 1909 at Selje, son of Vilhelm Pedersen Midtgård, born 1873 at Selje, and Elisabeth née Indredavik, born 1874 at Davik. During the war sailed in the allied merchant marine as an ordinary seaman on SS Senta. The ship sailed in a convoy from Halifax heading for Belfast, but on 13 October 1942, it disappeared from the convoy without a trace, and the ship and crew were never heard of again.

ONARHEIM, ASTRID LANDE, housewife, Måløy. Born 12 October 1922 in Haugesund, daughter of Asjel Lande, born 1878, and Dorthea née Wåge, born 1889, both at Avaldsnes. Married 1943 in Haugesund to manager Hilmar Onarheim, born 1915 at Kvinnherad. Middle school, trade school and school of home economics. Travelled with her husband from Måløy on SS Havda which was bombed and sunk by allied planes south of Askvoll. She was wounded and died on 9 December 1944. Buried in Haugesund.

SALTKJEL, AUGUST, fisherman and farmer, Sør-Vågsøy. Born 4 September 1886 at Selje, son of Mons Tennebø, born 1848 at Selje, and Brite née Eldevik, born 1848 at Davik. Married 1914 at Selje to Astrid Lovise, born 1892 same place, eight children. Was taken hostage on 27 December 1941 because one of his sons had escaped to England. Was imprisoned in "Bergens kretsfengsel" and at Grini until he fell ill and was admitted to Ullevål hospital where he died on 7 May 1942. Buried at Selje.

SKAVØY, EINAR, stoker, Sør-Vågsøy. Born 24 September 1920 at Selje, son of Rasmus Skavøy, born 1869 same place, and Elise née Oksholen, born 1881 same place. Sailed in foreign trade when the war broke out in Norway, and went into allied service. Died on 23 September 1942 when SS Lindvangen was torpedoed on her way from Paramaribo in Suriname to Trinidad.

SKAVØPOLD, BERNHARD SAMSON, skipper, Sør-Vågsøy. Born 24 March 1904 at Selje, son of John Danielsen Skavøpold, born 1870 at Selje, and Marie née Angelshaug, born 1876 at Davik. Skipper certificate. Was captain onboard MS Store-Bill which belonged to the company "Statens kjøleanlegg" in Ålesund, and died on 20 July 1942 when the ship was bombed while docked at Honningsvåg.

SOLHEIM, ODD, stoker, Sør-Vågsøy. Born 7 January 1919 at Selje, son of Simon Solheim, born 1895, and Lovise née Andersen, both born at Selje. Married 1942 to Bergljot, born 1916. One child. Was onboard SS Irma and died when the ship sank at Hustadvika on 13 February 1944 after an explosion. The ship was en route from Bergen to Kristiansund.

STRAND, IRENE ANNIE, housewife, Sør-Vågsøy. Born 24 August 1916 at Hadsel, daughter of Peder Hanssen, born 1878 at Bø, Vesterålen, and Olga Rossette née Jensen, born 1889 at Dverberg. Married 1943 in Svolvær to Harald Andreas Strand, born 1914 in Sør-Vågsøy. Two children. Was passenger on SS Sanct Svithun, and died on 30 September 1943 when the ship was bombed by planes at Buholmen off Stad, en route from Tromsø to Bergen.

SOLVIK, JAKOB M. (no reference in the book Våre falne)

YTREBØ, SIGURD, engineer, Sør-Vågsøy. Born 9 September 1909 at Davik, son of tenant farmer Sivert Olsen Ulsdal and Jørgine Olsdatter née Angelshaug, born 1877 at Davik. Was a fisherman, but during the war, he worked on a coastal cargo ship, later as an engineer on MS Store-Bill, in the supply service for the cold storage plant at Ålesund. Died on 20 July 1942 during an air raid on Honningsvåg.

At the base of the stone we find the name of Gudmund Waag from Davik.
VÅG, GUDMUND LUND, ordinary seaman, Davik. Born 15 June 1919 at Tjøtta, son of Martin Gundersen Våg, born 1880, and Vedikka née Seime, born 1886, both born at Davik. Was onboard SS El Lago of Panama. Died on 21 October 1942 when the ship was torpedoed on her way to Murmansk.

The monument weighs seven tonnes, and it is made of granite from the Larvik area. The company "Brødr. Sildnes Stenhuggeri" in Nordmøre delivered the stone. The stonecutters came to Måløy to do the work there because the stone was so heavy that they could not get it to their workplace.
Owner: Fylksarkivet i Sogn og Fjordane. - Date: 2002. - Photographer: Hermund Kleppa.
Fylksarkivet i Sogn og Fjordane.
2002.
Hermund Kleppa.

On the memorial stone, the names of the 17 men and women from the municipality of Sør-Vågsøy who died in wartime actions are inscribed, in addition to the name of one man from the municipality of Davik.
Owner: Fylksarkivet i Sogn og Fjordane. - Date: 2002. - Photographer: Hermund Kleppa.
Fylksarkivet i Sogn og Fjordane.
2002.
Hermund Kleppa.